With Christmas and New Year’s Eve round the corner, I have friends asking me whether I’ll be going party-hopping, and where. The answer is: nowhere. I’m not a party animal (I’d much rather stay at home and watch an old film), and I can’t dance to save my life. That said and done, though, I love party songs from old Hindi films—especially when there’s dancing too (Herman Benjamin, anyone?) So here’s a list of ten of my favourite dance party songs. They’re all from the 50’s through the 60’s (one from 1970), and only from movies I’ve seen. And yes, all of them have dancing.

10. Baar baar din yeh aaye from Farz (1967)
The ultimate birthday (`bird-day’?) party song. I don’t much care for Babita, but she looks lovely in this one. Jeetendra’s a little gawkish, I think (pardonable: one of his first movies, after all), but does show signs of the Jumping Jack he was to become in later years. The dancing—most of it by extras—is not very attractive. But yes, the song does sort of stick with you.

9. Hai hai hai yeh nigaahein from Paying Guest (1957)
Paying Guest had some great music, and this song’s no exception. An inebriated Dev Anand (the inebriation is thanks to some drugged candies his date, Shubha Khote, has fed him) careens all across the dance floor at a New Year’s Eve party. Kishore Kumar—who sang playback—does an awesome job with emotion: there’s confused intoxication, playfulness, despondency, seduction—just about everything in his voice. Superb! And watch out for the extras who dance: they’re very good. 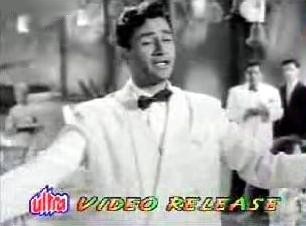 8. Aayi hain bahaarein mite zulm-o-sitam from Ram aur Shyam (1967)
Another birthday party, this one for the kids. Dilip Kumar treats Baby Farida, Nirupa Roy, and a large group of children to a great song, which literally spells out the fact that he’s come as a savior of sorts into this sad little household that’s been tyrannised by the evil Pran all these years. Pran, unfortunately, isn’t anywhere to be seen in the song, but Dilip Kumar is, and he’s obviously enjoying himself. A lot of the children are pretty good too, doing the twist as if their lives depended upon it! Cute.

7. Dil ki girah khol do from Raat aur Din (1967)
From the twist to a ballroom dance, and a quieter, more lyrical tune, a lovely duet between Lata and Manna Dey. Nargis looks vastly different from her usual self in a glamorous avatar, eyes heavily made up, and clad in a clinging, shimmering dress slit up to the knee. No wonder Feroz Khan looks very pleased at getting her to dance with him! This, by the way, isn’t a party, strictly speaking—it’s set in a nightclub—but yes, it’s an impromptu song, and not by a performer (I’ll do favourite `performer’ songs in another post!) 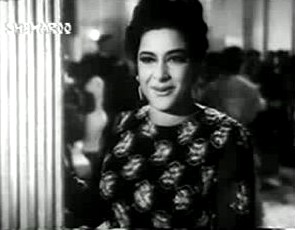 6. Aapko pehle bhi kahin dekha hai from Tum haseen main jawaan (1970)
Dharmendra in a uniform. Hema Malini in a clingy dress and shimmery blue hair (Cleopatra in 1970?). Eye candy all the way. The dancing isn’t great; this is supposed to be a party aboard a docked ship, and ill-fitting sailor uniforms, combined with calisthenic-like moves, don’t make much of an impression. But it’s a very catchy tune, and the lead pair look so good together, this had to be on my list!

5. Duniya paagal hai ya phir main deewaana from Shagird (1967)
Joy Mukherjee’s the ultimate party pooper in this one: the song’s a tirade against love, sung (with great gusto, may I add, by Mohammad Rafi) at an engagement party. There are, inexplicably, a bunch of extras dressed as deckhands, complete with mops, in the background (a la Mera Naam Chin Chin Choo? Who knows). What I like about it is the exuberance of the song, I S Johar’s appreciative “Wah, wah, mere shagird!” at regular intervals, and Joy Mukherjee’s dancing. It’s really quite amazing: he throws himself about with such gay abandon. I remember watching a TV interview with him years ago, in which he said that en route to Tokyo to film Love in Tokyo, he’d stopped by in Hong Kong. In a nightclub there, he’d seen a dancer doing this dance, and he’d liked it so much, he got her to teach him too—and that’s what he performed in Duniya paagal hai.

4. Aajkal tere mere pyaar ke charche from Brahmachari (1968)
This song has three of my favourite people in it: Shammi Kapoor, Mumtaz and Pran. What’s more, it’s got a very infectious tune, and both Mumtaz (who’s gorgeous in that seductively draped orange sari) and Shammi look like they’re enjoying themselves thoroughly: 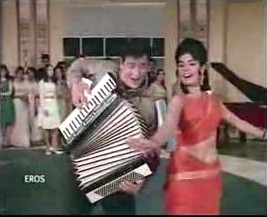 The rest of the guests are rather sedate until the last verse: till then, except for a few who twitch a bit now and then, everybody’s just looking on. Watch out for Shammi doing a one-man orchestra act: he plays the piano, accordion, and sax in this song.

3. Tu mera main teri duniya jale toh jale from Pyaar hi pyaar (1969)
Dharmendra again. For someone who was never a great dancer, that’s quite a feat. But hey, this song’s such a delight, it’s worth it—and anyway, most of the dancing is done by the supremely accomplished Vyjyantimala, with Manmohan shaking a leg alongside. The other dancers seem to be having loads of fun too (as is the band, The Monkees—watch the grins on their faces when the camera pans to Dharmendra). A very peppy tune, and I love the verbal tussles between the two leads! And yes, Dharmendra (despite the bronze jacket) looks awesome with a moustache.

2. Awara ae mere dil from Raat aur din (1967)
This is a Christmas party, with a voluptuous Laxmi Chhaya (as Peggy) in a glittery cheongsam. Streamers flutter down from the ceiling as she twirls from one man to the other. I like this song not just because the tune and the picturisation are great, but also because it combines joy with cynicism. It always makes me think Peggy may’ve been the life of the party, but deep down was a lonely soul—probably closer to the woman who sang the sad version of this song.
And I’ve made a discovery that’ll probably interest some people: the band in the background is Ted Lyons and His Cubs. Yes!! So does that send the count up to five? 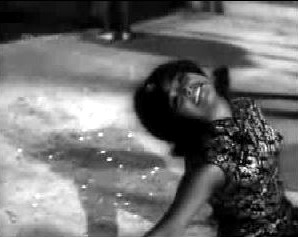 1. Aage bhi jaane na tu from Waqt (1965)
Much quieter than most songs on this list, and the dancing is slow. But oh, such a sublime song—Asha sings it with a sensuous elegance that perfectly fits the crooner (any idea who the actress is? My mother, who grew up in the extremely fashionable Calcutta of the 60’s, says this woman must’ve been a real crooner, she had the mannerisms and the ada down to a T). The music’s amazing, the lyrics are great, and best of all, the story actually moves on through the song—an estranged fiancé reconciles with his beloved; a poverty-stricken son rushes home to an ill mother; a thief is subtly reminded that he’s dancing with royalty simply so that he can make a grab at her diamond necklace—and the stage is set for a murder. Brilliant. 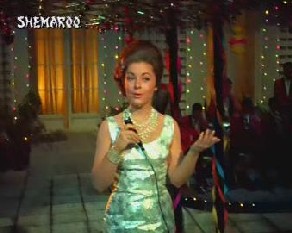 15 thoughts on “Ten of my favourite dance party songs”