The story begins with a royal summons from Queen Marie Antoinette (Nina Foch) to her cousin Noel, Marquis de Maynes (Mel Ferrer). The marquis is a suave but bloodthirsty aristocrat, who spends most of his time dueling with—and killing—other men. He also happens to be in love with the queen. 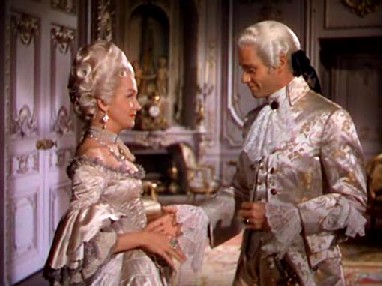 Marie Antoinette, however, wants de Maynes to get married; and when he asks her to choose, she obliges. The girl is Aline (Janet Leigh), sweet, high-born and somewhat insipid. The marquis’s unfailingly gallant, but neither he nor Aline are attracted to each other.

Meanwhile, in Paris, another love story is taking a more romantic turn. The debonair Andre Moreau (Stewart Granger) has just discovered that his ambitious girlfriend Lenore (Eleanor Parker), leading actress of the Binet Company, has decamped to Paris to marry a boring, middle-aged but wealthy sausage-maker. Moreau effectively boots the bridegroom out of the coach and promises Lenore he’ll marry her himself—as soon as he’s fetched his best man, Philippe de Valmorin (Richard Anderson). 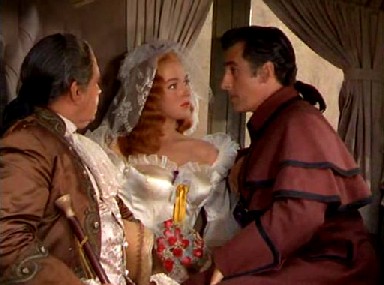 But when Moreau arrives at Philippe’s home, he finds trouble. Philippe, though blue-blooded, has been up to no good, writing inflammatory (and ungrammatical, as Moreau points out) articles on liberté, égalité et fraternité, under the nom de plume Marcus Brutus. Philippe’s parents have hidden him successfully so far, but Philippe must get out of Paris—and the house is being watched.

Moreau, good pal that he is, helps Philippe escape by disguising him (pretty cursorily) and making him drive off in the coach Lenore’s sitting in. Moreau, meanwhile, goes to visit his lawyer Fabian (Curtis Cooksey) to get some money to help finance Philippe’s revolutionary activities. The ensuing scene’s full of revelations, and some very-close-shave barber work on the part of Moreau:

It turns out Moreau knows he’s the illegitimate son of an unknown aristocrat. His father’s been secretly paying—through Fabian—for Moreau’s education and upkeep all these years. Moreau pushes Fabian a bit (easy when you’re holding a sharp razor to someone’s throat), and Fabian reveals Moreau’s father’s name: the Count de Gavrillac.

Moreau joins Philippe, only to discover that Lenore’s gone off in a huff at being deserted so summarily by Moreau. Moreau’s more amused than anything else, and they journey on towards Gavrillac, where Moreau intends to confront his father. On the way, they see Aline sitting by her coach, its wheel broken. Moreau’s barely clapped eyes on Aline before he falls for her head over heels.

Moreau’s so smitten, he leaps into Aline’s coach when it starts off again. He grabs her hand, professes his love for her—and soon after sees the coat of arms on Aline’s lap robe. 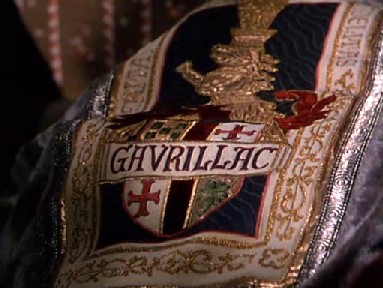 Aline happily informs Moreau that her father is the Count de Gavrillac.

Oh no. Oh, no, no, no. Moreau’s devastated (so am I). Just then, they reach the Manor of Gavrillac, and Aline persuades Moreau to come in. Just as well, because it turns out she’ll need Moreau’s friendship: while she’s been away at court, her father’s died. Moreau comforts Aline, then takes himself off to rejoin Philippe and pour out his woes to his old friend.

As luck would have it, the Marquis de Maynes is passing by, and stops at the same inn as Moreau and Philippe. His chevalier recognises Philippe as Marcus Brutus, and the marquis—ever anxious to practise his fencing—ends up killing Philippe. Moreau, who loves Philippe as a younger brother, sees red and goes for the marquis. He can’t fence, so doesn’t stand a chance, and is humiliated pretty thoroughly. 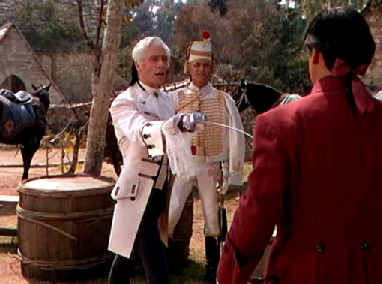 Moreau, however, is an enterprising character. With the help of a pistol, he wards off the marquis and his goons, grabs a horse and takes off, swearing revenge. He stops en route to reassure Aline that he’ll always be her friend. He then rides off for Lacrosse, and de Mayne’s chevalier follows him all the way there—to a rundown theatre where M Binet, Lenore and Co. are performing.

Escaping from the chevalier, Moreau blunders into the room of one of the mummers: the actor who plays the scaramouche. The actor’s very drunk, and keels over soon after. Moreau, with the chevalier’s men hard on his heels, takes on the obvious disguise, and lands up on stage. This, and the other scenes featuring Granger as Scaramouche, are delightful—slapstick, of course, but fun.

From the real Scaramouche, Moreau’s also discovered a couple of other interesting facts. First, the Marquis de Mayne’s fencing instructor is a man named Doutreval. Second, Doutreval is a revolutionary. This is serendipity, and Moreau grabs it with both hands. He goes off to meet Doutreval (John Dehner) and, with some tactful references to Marcus Brutus, liberté, etc, wins his help. Doutreval begins training Moreau, until one day when the marquis happens to walk in—and all hell breaks loose.

At this stage, I thought the film would be fairly predictable. Surprisingly enough, it isn’t. There are lots of delicious twists and turns (some very reminiscent of Hindi films, with all ends neatly tied up!), and plenty of action. Not a very accurate or thought-provoking depiction of the French Revolution, perhaps, but one of the best swashbucklers there is.

Stewart Granger. This man is wonderful, in just about every way: he’s hilarious as the buffoonish Scaramouche; perfect as the arrogant sort-of revolutionary who dares to oppose the aristos on their home ground; and just awesome in all those stunning fencing scenes. And even when he’s not doing any of that, he’s so gorgeous, I’m happy just gawping foolishly at him.

The fencing. Scaramouche has one of the longest duels ever shown on screen, and it’s perfect. Most of the fencing was done not by doubles but by Granger and Ferrer themselves, and Granger even did some of the very daring stunts that appear in the climax.

The costumes and the sets are so believable. I especially liked the `sets’ of the Binet Company’s shows: these looked like actual 18th century props on a real 18th century stage. And the mummers—Scaramouche, Harlequin, Pierrot, Pierette, et al—are superb.

Eleanor Parker. She’s beautiful, feisty, such a delight to watch.

Moreau doesn’t seem to be quite able to make up his mind about his heart. He’s got the hots for Lenore, but then he falls for Aline just a second after he sees her—and when it turns out she’s his half-sister, he ends up back with Lenore… and then, like a ping-pong ball, bounces between Aline and Lenore, Lenore and Aline. I’m not looking at this from a moral point of view; it’s just not very convincing.

But Scaramouche is such an enjoyable film, I can forgive minor transgressions.