Years ago, an issue of Reader’s Digest carried a list of ten Hollywood films any self-respecting film collector/lover must possess. At the time, I had seen only one of the films on the list—Gone With the Wind—but since then I’ve seen some more, Singin’ In the Rain and Stagecoach among them. And though I’m a Gene Kelly fan (and not a John Wayne fan!), I must admit that I’d rate this film higher than Singin’ In the Rain. It is a Western, of course, and with all the usual trappings of a Western: the Apaches that attack out of the blue; the hooker with the heart of gold; and the wronged ‘outlaw’ who’s bent on revenge. But Stagecoach has a lot more going for it, and makes good viewing even for someone who’s not really into Westerns. 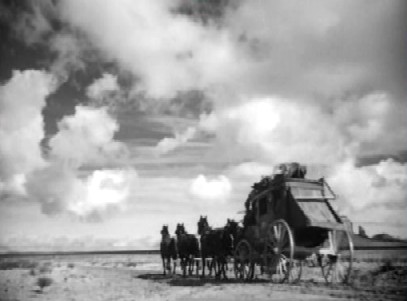 The film begins in the dusty little town of Tonto, where a stagecoach halts briefly for a change of horses. The driver, Buck (Andy Devine), unshaven and hoarse, offloads a heavy Wells Fargo box full of money—the payroll for the mining company. Two passengers alight to stretch their legs and have a cup of coffee while the horses are changed. One of these is the very prim and proper Lucy Mallory (Louise Platt), heading west to meet her husband, who’s in the Army. 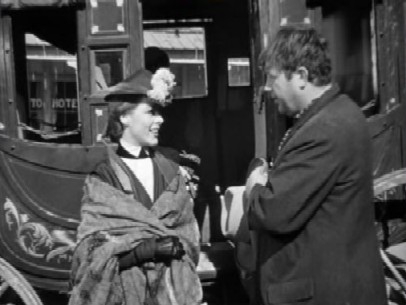 Lucy’s in a `delicate condition’ and a friend who runs into her at Tonto urges her to stop at Tonto. Fortunately, the friend’s husband has good news: Lucy’s husband is headed her way. In fact, along with his company of soldiers, he should be arriving at Dry Forge soon—and Dry Forge is the next halt for the stagecoach. Lucy insists she can make it to Dry Forge easily.
She also happens to notice an elegant (to me he looks mildly serpentine) gentleman—who is obviously quite taken with her. This is Hatfield (John Carradine), a southern gentleman, an ex-Confederate Major, and an inveterate gambler. 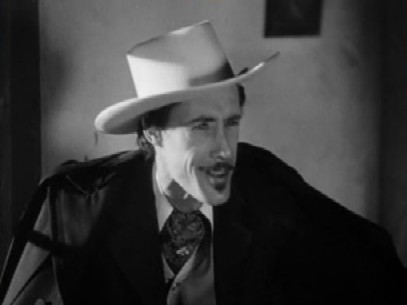 The other passenger who’s stepped off at Tonto for a breather is the mild-mannered whisky salesman Mr Peacock (Donald Meek—what a singularly apt last name!). Mr Peacock goes into the local barroom for a drink, and is accosted by an already somewhat tipsy Josiah Boone (Thomas Mitchell), Tonto’s physician—a good doctor when he’s sober, but then he’s rarely ever sober. The snooty old hags of Tonto have ganged up to rid the town of riffraff, and Dr Boone has been asked, ungently, to leave. So he’s going to be getting on to the stagecoach with Lucy and Mr Peacock. Meanwhile, he busies himself sampling Mr Peacock’s samples of whisky. 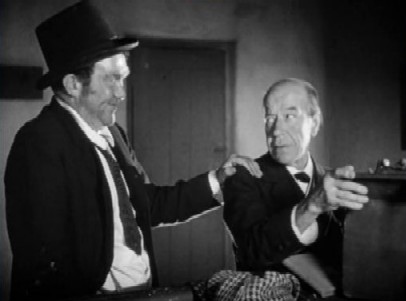 Also a victim of this puritan zeal is the local ‘fallen woman’, Dallas (Claire Trevor). Dallas is literally shoved onto the stage by the old ladies of Tonto, even though she keeps protesting that she’s been here so long, that she has nobody to go to, and so on. No-one’s listening, though, and whether she likes it or not, Dallas has to get on to the stagecoach with Dr Boone and go to Lordsburg, at the end of the line. 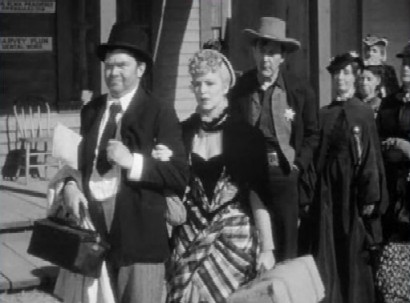 Buck, meanwhile, has stopped by to say hello to the marshall, Curley (George Bancroft). At the marshall’s office, Buck comes to know that a certain Ringo Kid has escaped from the penitentiary where he’d been imprisoned on the testimony of one Luke Plumber. From the conversation that ensues, it’s obvious that the Ringo Kid is considered more wronged than a wrongdoer. When Buck mentions that he saw Luke Plumber in Lordsburg, Curley’s ears prick up. He fears a showdown between the Ringo Kid and Luke at Lordsburg, so he tells Buck he, Curley, will ride shotgun from Tonto to Lordsburg. 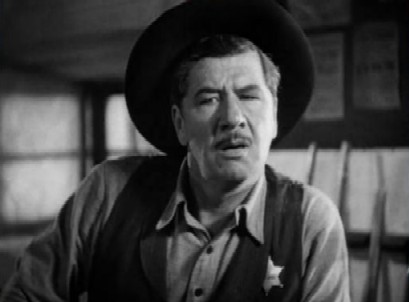 So the stagecoach is suddenly pretty crowded: Curley’s up on top next to Buck; inside, there’s Mr Peacock and Lucy—the latter sniffing disdainfully and drawing her skirts away from Dallas and Dr Boone. Oh, what odious people.
Fortunately for Lucy, a knight in somewhat tainted armour is at hand. Hatfield decides to get on the stage as well and offer his protection to the lady: protection from not just the perils of the journey, but also from the evils of such vile company. 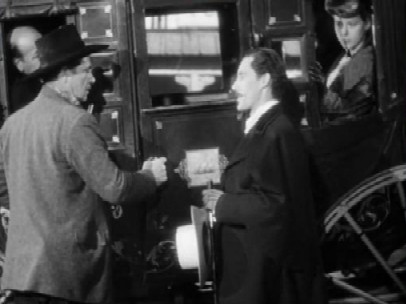 Someone else turns up too: a young Army officer, with a company of soldiers, to say that the cables have been cut by marauding Apaches but Army informers have brought news that the dreaded Apache chief Geronimo has broken out of his reservation. He’s expected to gather his forces for an all-out attack. These soldiers have been deputed to escort the stage till Dry Forge, from where another detachment will take over to escort the stage to the next halt, Apache Wells—and so on, till Lordsburg. 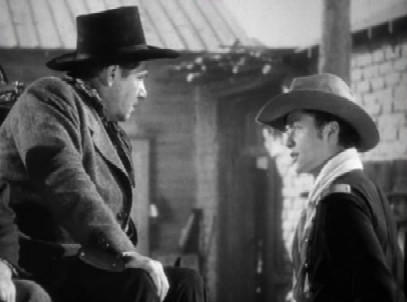 Just as the stagecoach is rolling out of town, it’s hailed by the pompous Mr Gatewood (Berton Churchill), the short-tempered, imperious (and, unknown to everyone, thieving) bank manager of Tonto. He’s carrying a valise—which the others don’t realise is stuffed to the brim with all that lovely payroll money. Mr Gatewood tells Buck and Curley that he’s just received a telegram from Lordsburg and needs to get there as soon as possible. 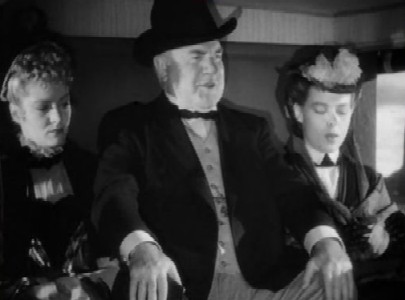 They’re barely out of town and into the countryside when the stage is stopped one more time—and this time it’s the Ringo Kid (John Wayne) himself. As Curley had feared, the Ringo Kid is headed for Lordsburg and Luke Plumber. Curley lets him get into the stagecoach, but confiscates the man’s gun and tells him in no uncertain terms that he’s under arrest. One attempt at escape, and the Kid is as good as dead. 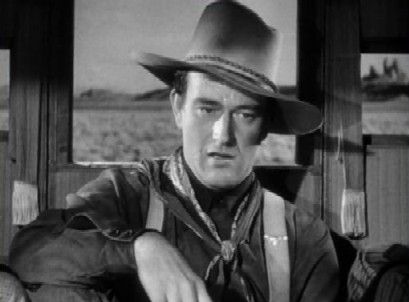 And so they go, rattle and shake, through dust and along rocky roads, to Dry Forge—where they find that the longed-for escort (and Lucy’s husband) aren’t there. It turns out they were ordered back to Apache Wells, so now Lucy will have to go to Apache Wells to meet her husband.
But they do stop at Dry Forge for lunch, and the sneering snootiness of both Lucy and her mentor, Hatfield, comes to the fore as they move away from where Dallas is sitting. The Ringo Kid takes Dallas under his wing and treats her like a human being, helping ease the hurt of the rejection. 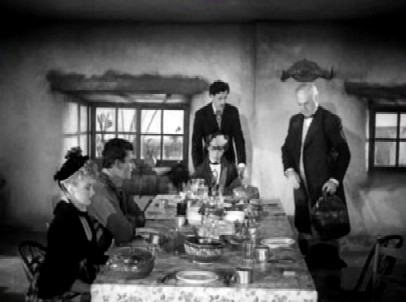 But Apache Wells, thank heavens, lies just a little further. And though they won’t have an Army escort, Buck says he’ll take a route over the mountains—it’ll be freezing cold, but since the Apaches don’t like snow, at least they’ll be safe from attack.
At Apache Wells, Lucy will finally meet her husband. A little further, and at Lordsburg, the Kid will meet (if Curley allows it) Luke Plumber to decide their individual fates. Mr Gatewood will be able to begin a grand new life, and Dallas will be at the end of her journey. 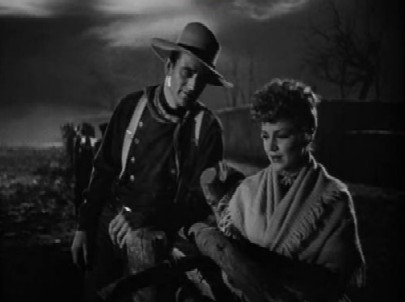 Will it all happen? Or will the destinies of this bunch of strangers change in ways they’ve never imagined?

What I liked about this film:
The characters. The story itself is simple enough and follows the basic structure of several other ‘journey’ films like Ice Cold in Alex, Lifeboat, or Westward the Women: a bunch of strangers is thrown together by circumstances, and must put aside its differences in order to reach the destination—or, in some cases, simply to survive. Stagecoach too is fairly formulaic in this respect, but the depiction of the characters—from the sneering Hatfield, whose only concern seems to be the comfort of Lucy Mallory—to Dallas, surprised at the friendship (and love) offered by the Ringo Kid, to Dr Boone, a diamond in the rough—is memorable. They’re all very different people: crude, charming, cruel, crooked, but never one-dimensional.

The landscape: Monument Valley at its best. 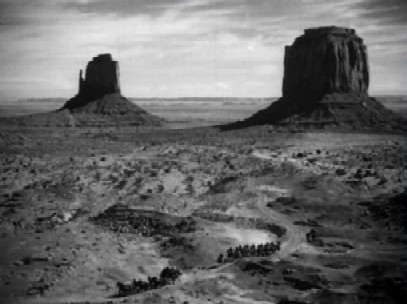 What I didn’t like:
The clichés. These pile on towards the end of the film and drag it down a few notches.

Still, clichés and all, a very watchable film—and not a run-of-the-mill Western. The American Film Institute lists Stagecoach as one of the ten best Westerns ever made, and I agree.