This blog’s been on a Hollywood roll long enough (two films in succession? Too long). So we’re back to good old Bollywood, and with a film that somewhat repeats the cast of the deplorable Bhabhi: Balraj Sahni (again as the long-suffering, self-sacrificing eldest brother), Nanda (again simpering and whimpering), even Shyama, again as the daughter-in-law who starts off being nice but changes into a screechy harridan. And, like Bhabhi, this too is about a loving family split asunder.

It begins by hammering in the message about the members of the family being very, very deeply attached to each other. It’s rakshabandhan, and Meena (Nanda) is teasing her older brothers Rajendra (Balraj Sahni) and Shekhar (Rehman). Meena’s tying of the rakhi on her brothers’ wrists is fraught with much emotion. We also discover that Meena, Rajendra and Shekhar are orphans, surviving on the modest income of Rajendra, who works in a factory. Shekhar is studying at a college in a city [Wasn’t Rehman the wrong choice for this role? He certainly doesn’t look young enough to be a college student], and everybody’s hopes are pinned on him—Shekhar will eventually get a good job and do them proud.

More facts emerge. Meena discovers a girl’s photograph tucked away in Shekhar’s book, and we also learn that Rajendra has long been in love with the local school teacher Yashoda (Veena, looking very striking). Yashoda wants them to get married, but Rajendra has been putting it off, with the excuse that he’s too poor to look after her in the style she deserves. A lame excuse, I think, and (though she doesn’t say so), Yashoda looks like that’s her opinion too. 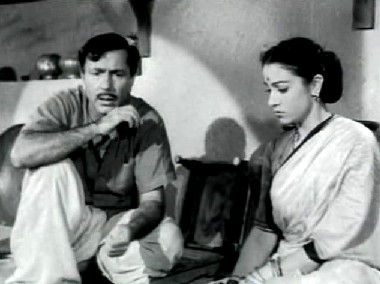 Shekhar has to return to college, and when he’s leaving, Rajendra promises that he will send the college fees soon. Shekhar goes off, but Rajendra is in a dilemma: he doesn’t know where he’s going to get the money to pay for Shekhar’s education.
Meena, however, has a solution to offer. Their chachaji (their father’s younger brother) holds Rs 5,000 of theirs, which had been put by for Meena’s wedding, whenever that happens. Rajendra should use part of that money. Rajendra refuses to touch what he says is her money, but Meena bullies him into it.

Rajendra finally gives in and goes to visit Chachaji (Radha Kishan). Chachaji is a slime ball of the first order, with no scruples whatsoever. He informs Rajendra that the 5,000 was used up in the funerals of Rajendra’s parents; there’s nothing left now. And he’s broke, too: he hasn’t any money to lend. Even Rajendra realises that this is a lie, but there’s nothing he can say.

Back home, Meena manages to persuade Rajendra to sell off some of her jewellery to get the money.

Chachaji’s son Mahesh (Mehmood) is a happy-go-lucky young man who disapproves of his father’s money-grubbing ways. He’s also very close to his cousins Rajendra, Shekhar and Meena, so when it’s time for Mahesh to go back to the city (where he studies), Rajendra gives him the money for Shekhar’s fees.
But when Mahesh goes to meet Shekhar, it’s to find that Shekhar, instead of devoting himself to his studies (as everybody back home fondly believes him to be doing), is busy romancing the beautiful and very wealthy Shobha (Shyama).

Mahesh hands over the money to Shekhar, gives him a lecture on being a diligent student, and then goes off to write to Rajendra about Shobha.
The long and the short of it is that Rajendra comes galloping to the city, to Shobha’s house, where he ends up meeting Shobha’s father (Badri Prasad), a man with a weak heart and an obsessive fondness for gambling on horse races. Shobha’s father is a jolly sort and when Rajendra confides in him—that Shekhar cannot possibly get married until Meena is wedded—he suggests a promising young doctor whom he knows, as a bridegroom for Meena. 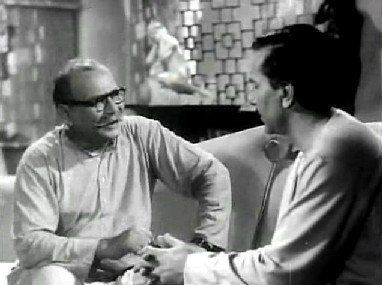 Rajendra is very grateful, and returns home. Shortly after, Shobha’s father comes to their house with the groom’s father (Hari Shivdasani). The old gentleman approves of Meena and the match is fixed.
Now Rajendra needs money for Meena’s wedding. He goes to Chachaji to ask for a loan, and Chachaji tells Rajendra that he knows of a rich seth who can lend the money against some surety: Rajendra’s house, for instance? Rajendra is initially reluctant, but he’s so desperate, he agrees.
The next day, when Rajendra goes to Chachaji to sign the papers, he discovers that the contract makes over the house to Chachaji rather than to the seth, in exchange for Rs 10,000. Chachaji gives Rajendra some rigmarole about having pledged his own house to the seth for Rs 10,000, which debt he’s passed on to Rajendra, but it’s clear there’s no seth in this business. Rajendra has no choice, so he signs.

Even Mahesh has found a girl for himself: one evening, an orphan named Sheila (Shubha Khote) takes shelter in his room, escaping from a guardian who wants to sell her off. Mahesh lets her stay on in his room, and later takes her home, much to the horror of Chachaji, who can’t stomach the idea of a penniless orphan as a daughter-in-law.

In the meantime, lightning strikes (metaphorically) Rajendra’s household. Meena, celebrating her upcoming wedding with her friends, falls from a swing and hits her head—and goes blind. Rajendra is too honest to hide the truth from the groom and his father, and tells them. The young man, Dr Ramesh Mathur (Sudesh Kumar, whom I somehow like, even though he didn’t do too many films) doesn’t think there’s anything wrong with marrying a blind girl. His father, on the other hand, refuses point blank, and insists on taking away the baaraat. 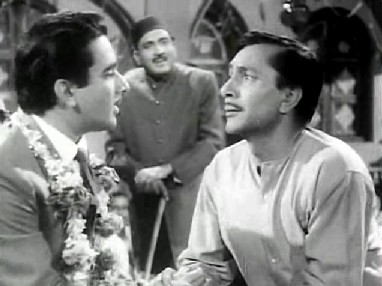 The family is devastated, but a weepy Meena persuades Rajendra that there can be one consolation for them: if Shekhar gets married and Shobha comes to live with them, joy will return to their house.
So Shekhar and Shobha marry, and Shobha comes home. She’s very sweet and loving to Meena, even going so far as to throw out her own maid, Chanchal (Kanchan Mala? I’m not sure), when Chanchal is derisive of Meena’s blindness. 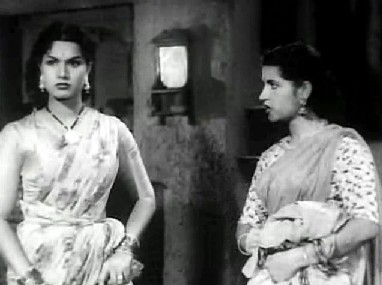 But with Chanchal gone and Meena hampered by her blindness, the burden of all the housework suddenly falls on Shobha. She copes with it fairly well, until it begins dawning on her that nobody really appreciates the amount of work she’s doing. Both Rajendra and Shekhar tick her off for not looking after Meena, and Shobha gradually starts becoming resentful. They finally reach a Cinderellaesque stage: Shobha making Meena do all the work, Meena bumbling about blindly and crying most of the time, and Shobha yelling at her or deliberately trying to show her up in a bad light. 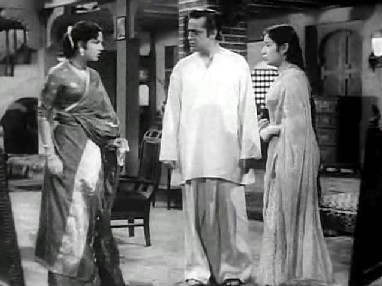 Shekhar, caught between Meena and Shobha, takes his wife’s side, and on rakshabandhan (so appropriate!), just as Meena’s coming forward to tie a rakhi on his wrist, Shekhar leaves the house with Shobha in tow. They go back to the city, to stay with Shobha’s father. In his company, Shekhar soon becomes addicted to horse racing and gambling.

Then comes lightning bolt #2. One day, a horse on which Shobha’s father had bet Rs 10,000, loses a race. When the old man hears of it, he has a heart attack and dies. From then on, Shekhar becomes even more degenerate, drinking, smoking and gambling away Shobha’s fortune.
Soon after, bolt #3. Meena—pining away for Shekhar—falls ill. Since there’s no-one else at home now, Rajendra has to look after her. He ends up getting late for work every other day, and one day, he loses his job.

As if that wasn’t enough, Chachaji drops bolt #4. He comes to Rajendra and demands the money he’d lent. If Rajendra doesn’t cough up the Rs 10,000 within the next 24 hours, his house is forfeit.
And since Rajendra can’t possibly get 10,000 from anywhere, Chachaji takes possession of the house. Rajendra and Meena now set off into the world, he taking up occasional jobs as a labourer to buy food for them. It’s a hard life, and with no light visible at the end of the tunnel…

Can things get any worse for this family? Can Rajendra, Shekhar and Meena ever come together again? Will Chachaji give up his avarice, and Shobha her spoilt brat-cruel bhabhi ways? Will Meena ever stop sobbing? And will that handsome Dr Ramesh show up again?

The music. Very good tunes; my favourites are Jaaoon kahaan bataaye dil (one of the few Mukesh songs I really like) and Main rangeela pyaar ka raahi.

Veena. Even though she isn’t a major character in the film, she’s one of the most likeable: a smart, strong woman, patient and gentle but with a self-assurance that’s very alluring. And she’s beautiful. I wish she’d been given more screen time in Chhoti Bahen.

It’s just so melodramatic. Yes, I know a lot of Hindi films of the 50’s and 60’s are full of self-sacrifice and uninhibited emotion, but this is one of those that really go overboard. While things are good (the first few scenes), they’re too good: oversugared and nauseatingly happy-family. When they go wrong, they go wrong all around, with everybody shrieking or crying or suffering silently. Nanda, especially, gets very irritating. She’s such a good actress, but through most of Chhoti Bahen, all she’s called upon to do is weep. Such a waste.