At home, our tastes (when it comes to cinema) are very varied. My husband likes science fiction or fantasy, kung fu, conspiracy, superheroes, and (occasionally) comedy. And very little of it pre-90’s. I watch just about anything that’s pre-70’s. So, when we were deciding which DVDs we wanted to order next from our DVD rental service, I was taken aback when my husband said, “Baiju Bawra.”
“That’s black and white,” I said, wondering if the recent bout of long and stressful work hours had taken its toll. “Early 50’s. Hindi.”
“I know,” he said. “Good music.”

And yes, good music is the outstanding feature of this film. It had to be, since it’s about the legendary 16th century singer and musician Baijnath (‘Baiju’) Bawra.

Agra during the reign of the Mughal Emperor Akbar (Bipin Gupta, though we don’t get to see him until close to the end of the film) is a wealthy, busy city: the capital of the Mughal empire. Here, in one of the grandest havelis of the imperial city, lives Tansen (Surendra), singer par excellence and one of the nau ratan (the fabled ‘nine gems’) of Akbar’s court. Tansen, it seems, is well aware of his consequence: nobody is allowed to even try to sing in the vicinity of his haveli, since that will disturb the maestro while he’s practising. If you want to sing, you’d better sing better than Tansen. If not, you’ll be executed.

Not everybody knows this, of course. One day, a group of minstrels passes through town, singing hymns, totally oblivious of this rule. Tansen’s band of hangers-on immediately attacks the minstrels. In the ensuing violence, there’s an accident and one of the men is fatally injured. As he’s dying, he tells his young son Baijnath ‘Baiju’ (Ratan Kumar) to avenge his death.

His father dead, a weeping and somewhat befuddled Baiju sets off to take revenge on Tansen. Not that Tansen is directly responsible, but still. Baiju isn’t even very sure how he’s going to avenge his father’s death—but passing a camp one day, he steals a sword and tries to run off with it, in the hope that he can someday use that sword to kill Tansen. The soldiers from the camp chase Baiju and catch up with him soon enough. They’re on the verge of meting out punishment when an unexpected saviour turns up: a passing pandit (Manmohan Krishna), who intercedes on Baiju’s behalf and finally takes the boy under his wing. 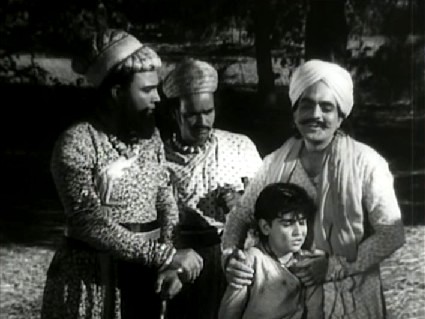 Panditji takes Baiju along with him to his riverside village. This is where Baiju meets the pretty little Gauri (Baby Tabassum), the boatman’s daughter who ferries Baiju and Panditji across. Along the way, she strikes up a friendship with Baiju… 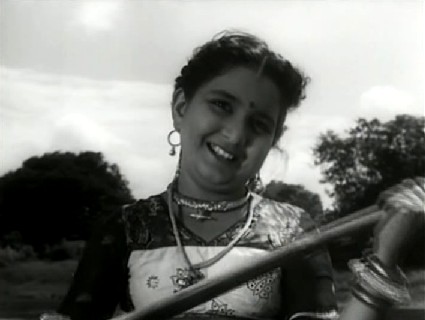 …a friendship that endures and blossoms into love. A few years later, Baiju (now Bharat Bhushan, with a shock of hair that’d give Dev Anand a run for his money) and Gauri (now Meena Kumari) are deeply in love. They spend most of their time together. After sundown, Gauri even goes to meet Baiju when he sits beside the river and practises his singing. She is his muse, says Baiju, but many of the villagers think this is all very scandalous.

Baiju and Gauri’s love is even more of a scandal because Gauri’s father Mohan (B M Vyas) has already arranged her marriage with a villager called Narpat (Mishra). Narpat is very full of himself, a wealthy man by village standards and pompous to boot. When he discovers that his betrothed is completely—and openly—in love with another man, Narpat is (with reason, I think) far from pleased. He takes Mohan to task about his daughter’s wayward ways, but when her father ticks her off, Gauri cowers only briefly. She isn’t giving up Baiju, no matter what Narpat or the other villagers may say. 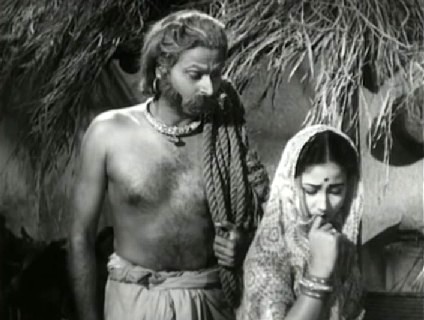 It gradually dawns on Narpat that the one attraction Baiju holds for Gauri is his beautiful voice. The way to win Gauri, therefore, is to sing as wonderfully as Baiju does. Narpat has a brainwave; he sends his right hand man off to Agra, to fetch a master singer who will hone Narpat’s talents, such as they are.

The man Narpat’s friend brings is Ghasit Khan (Radhakrishna), a not very good singer who is nevertheless able to recognise good singing when he hears it. Ghasit Khan arrives in the village on a night that’s going to be a turning point in the lives of all the main characters in this story.

One of the first people Ghasit Khan encounters in the village is Narpat Singh, who instantly antagonises Ghasit Khan by showing off his awful voice. Narpat has been spending the evening bawling his lungs out to a reluctant Gauri, and doesn’t realise that Ghasit Khan is the guru his friend has fetched.
Ghasit Khan has just begun to berate Narpat for his abysmal singing when the village is attacked by a band of dacoits, led by the fearsome Roopmati (Kuldeep Kaur). 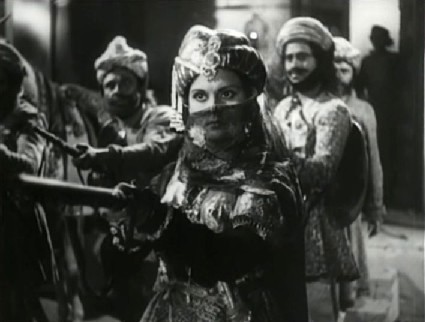 Roopmati’s busy instructing her bandits to loot and plunder, when Baiju breaks into song, dissuading the bandits and urging them towards humanity and mercy and general goodwill towards all. I can’t see why a lot as hardened as this would be affected by Baiju’s song, but they are. Roopmati agrees to return to the villagers all that the bandits have snatched from them—on one condition. Baiju will have to come with the bandits, back to their hideout.

Baiju doesn’t have much choice. Even though a clingy Gauri tries to stop him, he reminds her that unless he goes with Roopmati & Co., the village won’t be safe.
So Baiju ends up in Roopmati’s hideout, where she reveals the reason behind abducting him: love at first sight. Baiju is sceptical, and in any case, he’s too devoted to Gauri to even look at another woman.

In her conversation with Baiju, Roopmati tells him a little bit of her past. It emerges that she is the daughter of a wealthy princeling who was murdered and his lands confiscated. Roopmati is out to retrieve what is rightfully hers, and to seek vengeance for her father’s death.
For Baiju, this is like a bolt out of the blue: a moment of epiphany. Engrossed in his music and his Gauri, he’d forgotten all about his long-ago pledge to avenge his father’s death. He has a mission to accomplish. 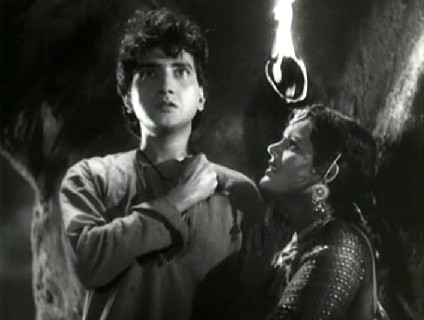 With a few words to a surprisingly accommodating Roopmati, Baiju goes off to Agra, and to Tansen’s haveli. He’s managed to acquire a sword along the way, and it’s now time for an accounting.
But Tansen, no matter that he may have been responsible for the death of Baiju’s father, is after all, Tansen: the sangeet samrat, the ‘king of music’. Baiju, lurking behind Tansen as he sings, finds himself mesmerised and is unable to lift his sword until it’s too late.

When Tansen ends his song and the spell is broken, Baiju is assaulted by Tansen’s guards and servants—but Tansen himself is gracious and forgiving. Baiju is released, and allowed to go his own way: the only way, he realises, that will be a fitting revenge. To merely kill Tansen would be an insufficient revenge; Tansen must be shamed—his music must be shown as being less than that of Baiju. So Baiju goes to Vrindavan, to become a disciple of Swami Haridas (Rai Mohan), Tansen’s guru. The man who taught Tansen can teach Baiju. Only an accomplished, highly trained Baiju can defeat Tansen, inflicting on him a fate worse than death. 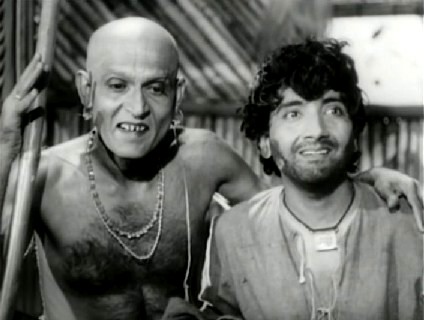 And thus the story plays out. Swami Haridas tries to teach Baiju to renounce violence and the need for revenge, while Baiju keeps his fury against Tansen alive. He wanders near and far, trying to reach for his own zenith in music—and far away, in that village by the river, a lonely Gauri, now being pressurised to marry Narpat, yearns for the lover who appears to have forgotten her. 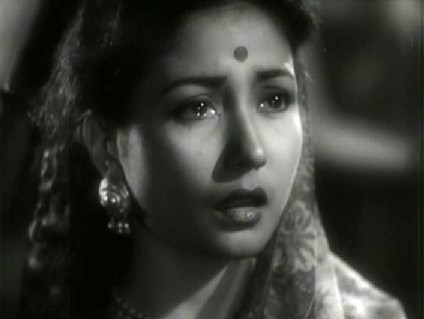 The music. Naushad is at his classical best here, with gems like the superb Man tadpat hari darshan ko aaj, Mohe bhool gaye saanwariya and Tu Ganga ki mauj main Jamuna ka dhara. The last-named is also a delightful bit of picturisation: a distressed and shy Gauri, caught midstream, with the entire village looking on as Baiju serenades her. Sweet!

Kuldeep Kaur. Gauri is a sweet but rather weepy village girl in Baiju Bawra; Roopmati, on the other hand, is a brave, feisty woman who doesn’t shy away from fighting—yet is mature and sensitive enough to be an object of sympathy. I liked her a lot; much more than Meena Kumari’s Gauri, though Gauri is admittedly very pretty.

Rai Mohan as Swami Haridas. There was something just so creepy about him. True, he was supposed to be the long-suffering, always-smiling and patient and saintly swami, but the general impression I got was of someone definitely a little macabre. Maybe the smile had something to do with it.

In any case, the story and the acting are not the main thing about Baiju Bawra. The acting is so-so (in some cases, even downright theatrical), and the story, while not boring, tends to wander off on tangents. The melodrama goes over the top every now and then, the wood-and-cardboard sets are unconvincing, and there are anachronisms (the bandits brandish rifles that fire successive rounds). But, Meena Kumari is pretty, Kuldeep Kaur is spirited, and the music is magnificent. If there’s one Hindi film I’d recommend for a good dose of classical Hindustani music, this would be it.