If you don’t know what manaana means, be patient. I’m getting around to that.

First, though, an introductory note on this post. This list of hard-found songs (believe me! I’ve spent months coming up with these) is dedicated to extremely supportive and loyal blog reader pacifist.  Pacifist won the Innovative Ideas Award in the Classic Bollywood Quiz I hosted a few months back – because she came up with the innovative idea of having prizes for everyone who participated, film awards style! This one’s for you, pacifist, because you were the one who suggested this list in the first place. And because it caught my fancy immediately.

Now, for those who don’t know Hindi. What does manaana mean? Coaxing or cajoling, and it’s inextricably tied up with roothna – to be huffy. The concept of rootho-ing and being manaao-ed rests on the assumption that the two people in question are already in a relationship (not necessarily romantic). If you’re indignant because you’re being stalked by some unknown roadside Romeo, you can’t be classified as having rootho-ed; you’re simply angry. Interestingly, the roothna-manaana trope also often has an element of farce or mischief in it; the person who’s rootho-ed is more often than not just being a drama queen (or king) than really upset.

Hindi cinema, of course, has countless examples of songs sung by heroes trying to manaao heroines who have rootho-ed. Remember Na rootho rootho na rootho? Or Dekho rootha na karo? Or Aa lag ja gale dilruba? The opposite – heroines manaao-ing rootho-ed heroes – is a good bit rarer. So, here goes: ten songs from (mainly) the 50s and 60s, from films I’ve seen, in which the heroine is the one doing the wheedling, and the hero is the one who’s huffy. Enjoy!

1. Acchhaji main haari chalo maan jaao na (Kaala Paani, 1958): Though this list isn’t in any order, this song is probably my favourite of the heroine-manaao-ing hero category. Our heroine here, Madhubala, is guilty of having suspected the faithfulness of her beloved, played by Dev Anand. She’s realised she was barking up the wrong tree, but it’s too late – he’s very miffed at her. So she sets out to coax him back, and succeeds (how could she not? She looks so ethereal, and her eyes sparkle with affection and mischief!) A delightful song, and brilliantly ‘choreographed’ – even the onlookers (Jankidas, Sundar and Agha) play a part in the picturisation, what with their jogging down the steps, blinking and gaping. 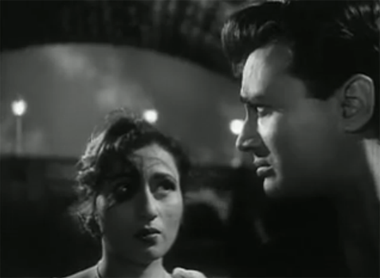 2. Kashmir ki kali hoon main (Junglee, 1961): Okay, I’ll admit I’m cheating a bit on this one, because though
(a) Shammi Kapoor is at his huffy best as the stiff-rumped, frowning businessman
(b) The peppy Saira Banu’s character does sing “Mujhse na rootho babuji” (“Don’t be annoyed at me, sir”)
…she’s really trying her best to get him even more irritated than he already is. But, since it’s a wonderful song (both to listen to and to watch) and she does, after all, plead with him not to rootho – let’s overlook the ulterior motive for a while. 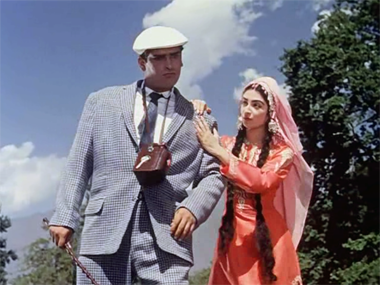 3. O mere Raja khafa na hona (Johnny Mera Naam, 1970): Another not-really-manaao-ing song, though not in the way of Kashmir ki kali hoon main. This one’s a bit complex. Hema Malini’s character is mixed up with the villains. Law-abiding Dev Anand is trying to infiltrate the gang – and part of that ploy has succeeded, because they’ve trusted him enough to have him take charge of an important briefcase that Hema Malini has to hand over.
But, at the rendezvous, they find the place crawling with cops. So, to try and put Jagdish Raj and his men off the scent, they sing a song – a song where Hema Malini pretends to manaao her rootho-ed lover. I love Hema Malini’s stylish look in this song!

4. Jiya o jiya o jiya kuchh bol do (Jab Pyar Kisi Se Hota Hai, 1961): Dev Anand again, but this time in a song that’s serious manaao-ing. He’s not just huffy, he’s hurt and angry in his belief that the girl he loves has jilted him. So much so that all of the efforts of his sweetheart (played by Asha Parekh) to woo him back are in vain. He doesn’t stop even when she falls down and hurts her head. Poor girl (he does look back at her from behind a tree trunk, but since she doesn’t see that, it is no consolation to her).

5. Dekho kasam se kasam se (Tumsa Nahin Dekha, 1957): Time for a frothy, peppy song, and one of my favourites for this theme. Shammi Kapoor’s character has just rescued the girl he loves (Ameeta). Though she’s been pretending indifference all this while, she loves him too – and his annoyance at the cavalier treatment she’s been meting out all this while finally melts her. Of course, by now he’s really rootho-ed, so she has to be mischievous, affectionate and pleading to get him to eventually give in. A wonderful song, even to watch.

6. Yeh lo main haari piya hui teri jeet re (Aar Paar, 1954): This one’s probably unique in that it’s set inside a moving car. Our heroine (Shyama) is trying her best to win back her huffy sweetheart (Guru Dutt), who’s a taxi driver. The song (in Geeta Dutt’s voice) is lovely, and Shyama’s blend of pleading, seductiveness and back-to-you-huffiness (as if she’s saying, “Okay, if you can be huffy, so can I”) is enchanting. No wonder poor Guru Dutt has no choice but to capitulate and put an arm around her.

7. Woh hain zara khafa-khafa (Shagird, 1967): Sweet, this one. Saira Banu – a made-over village belle in this film – is faced with an annoyed sweetheart (Joy Mukherji) and sets out to manaao him. She doesn’t apologise, just decides to tease him a bit about this juvenile huffiness of his. The evening is romantic, the garden and the fountains are lovely, her song is lilting… does the poor man stand a chance? No. So he gives in and begins singing, too.

8. Aji rooth kar ab kahaan jaaiyega (Aarzoo, 1965): Another of those faux-roothna songs. This is at a party where Rajendra Kumar makes a pretense of feeling slighted – enough to hand his teacup back to his pretty hostess (and girlfriend – played by Sadhana), and head for the door. He knows it’s a farce; he takes the cup back, even though he’s still saying he’ll leave. And she knows he’s not going anywhere. How could he, when she’s so pretty and has such a wonderful song to sing?
While she may be begging him to stay, she’s also telling him of the inextricable way in which they are bound. He cannot ever leave her.

9. Mere roothe hue balma (Baawre Nain): Not one of my favourite songs (though the film itself had some fantastic songs, by Roshan) – but it certainly meets the criterion for this list. Geeta Bali here is Tara, the orphaned village girl who’s come to the city, and finds happiness in the household of her long-lost sweetheart Chaand (played by Raj Kapoor). But there are evil forces at work, and they conspire to make Chaand jealous of Tara. Tara, therefore, ends up having to manaao Chaand and convince him that he is her true love.

10. O mere sona re sona re sona (Teesri Manzil, 1966): Another of my absolute favourite songs in this genre. The picturisation is first rate; the music (R D Burman), the singing (Asha Bhonsle and Mohammad Rafi); and the actors – Asha Parekh and Shammi Kapoor – couldn’t be improved upon. Our lady here has made the blunder of mistaking her admirer for an unprincipled lecher, only (of course, since he’s the hero) to discover how wrong she was. So it’s payback time, and she’s having to say sorry. And she does it so well, he forgives her soon enough to take over her song. An utter gem, this one. 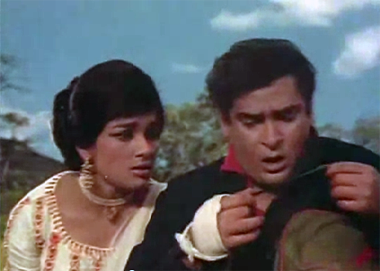 Any more good ones you can think up?