Mamagoto has been our go-to place for good, informal, fun South Asian food for several years now, ever since it opened its first outlet at Select CityWalk Mall. I love the easy-going ambience, the quirky and colourful illustrations on the walls (Tigers? A fish on a scooter? Tuk-tuks?). I really like their beverages (okay, I don’t usually drink alcohol, so I can’t comment on that, but they have some wonderful mocktails, including a kaffir lime and mint lemonade which could be the dictionary definition for ‘refreshing’).

And I love their food. All the way from an addictive rock shrimp tempura (served with chilli mayonnaise) to a raw papaya salad, chicken satay, a wonderful green bean and snow pea salad dressed with a coconut and peanut sauce—to main courses like their fabulous teriyaki meal in a bowl (we invariably opt for the lamb version, which comes cooked with onions and bok choy, served with rice). All of it, the many dozens of times we’ve eaten at Mamagoto, has been uniformly good.

This time, meeting up for a friend (and a film blogger, too; bollyviewer) for lunch, I suggested Mamagoto at Khan Market. We decided to go for an early lunch, and arrived just a little past 12.30 (Mamagoto opens at 12.30). Up the flight of stairs to the restaurant, and we found that except for a couple sitting near a window, we were the only other guests. (Not for long, though: by the time we left, less than an hour later, the restaurant had filled up).

What I was particularly keen on checking out was a relatively new concept Mamagoto have introduced: Mamabuns. Yes, it does sound a little odd (especially if you’ve never heard of the classic Vietnamese baguette sandwiches), but it’s supposed to be sandwiches and burgers with Oriental-style fillings. There’s a range of fillings available, all the way from veggie (mushrooms and tofu included) to fish, chicken, pork, etc. The sandwich (or burger—whatever you choose) comes with potato wedges and chilli mayonnaise, plus two sides of pickled vegetables. And—a real incentive for people who want a low carb meal—you can order the dish in the form of a salad. 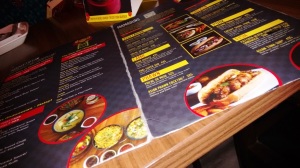 The Mamabuns menu at Mamagoto.

I picked a Pattaya beach shack fried fish, salad style. Bollyviewer, who decided to stick with Mamagoto’s regular menu (not Mamabuns), ordered the laksa tribute (a noodle soup, in a delicious spiced coconut broth; this can be ordered as a vegetarian version, a chicken one, or a prawn one; bollyviewer ordered chicken). Both of us decided to skip a drink, because we wanted to leave space for dessert.

Our food arrived a reasonable while later. Bollyviewer’s laksa tribute came in a large black bowl brimming with the mild, turmeric-yellow curry-like soup, with half a hard-boiled egg and a wedge of lime balanced atop two chopsticks laid across the top of the bowl. I’ve had this before (in fact, the very same thing: the chicken version), so can vouch for it: it’s good, hearty comfort food. Pretty much like a Burmese khao suey, though with fewer of the classic garnishes. 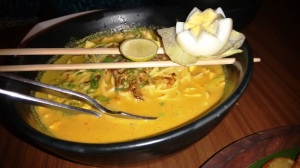 The laksa tribute at Mamagoto: this one’s the chicken version, though there are veggie and prawn versions too.

My Pattaya beach shack fried fish came in a large boat-shaped dish, a crumb-fried fillet of fish, sliced and placed atop a bed of mixed salad leaves and herbs: lettuce, lots of basil, mint, green coriander, even rocket leaves. There was a layer of caramelized onions here too, and a generous dressing with all the flavours of South East Asia: sweet, sour, salty, hot. This was absolutely perfect on its own, every forkful fresh, vibrant, so very Thailand.

(Besides the lightly spiced potato wedges with the chilli mayonnaise on the side, there was also a small bowl of pickled julienned carrots and what seemed like raw papaya; and a small bowl of a very unusual relish of finely chopped guava, lightly pickled. This one, while it’s not something I’d go back for, was at least fairly offbeat for me, and interesting). 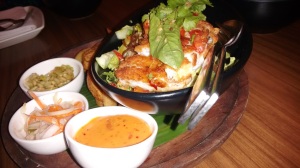 Pattaya beach shack fried fish, one of the Mamabuns offerings – without the bread.

Main course over, both of us examined the dessert menu (which is dominated—as so many menus of even Oriental or non-Western restaurants in Delhi are—by brownies and cakes). I had just about settled on a delectable-sounding coconut and lime drizzle loaf, when the waiter came along to inform us that only three desserts were available: brownies, caramel sponge cake, and coconut and palm sugar ice cream. Hobson’s choice, really, for both bollyviewer and me, since both of us wanted something at least slightly reminiscent of the Orient. The ice cream it was.

…and it was good. Creamy, coconutty without being overpoweringly so, sweet to the point of being pleasant, not syrupy. Three scoops of it, too, a generous portion.

The coconut and palm sugar ice cream at Mamagoto: luscious.

Our bill, including taxes and service charge, was Rs 1,740. For the sort of meal we had, I’d say that was value for money. It’s a given that I’ll be back at Mamagoto sooner or later; the next time, too, I’m going to go for the Mamabuns menu, and check out one of the other dishes on it.