As always, these songs are all from pre-1970s Hindi films that I’ve seen (with one exception, from a film on the cusp), and are in no particular order.

1. Aji roothkar ab kahaan jaaiyega/Aji humse bachkar kahaan jaaiyega (Aarzoo, 1965): One interesting thing I came across while researching the songs for this post: most double-version male/female solos appear in films in a specific sequence. The male is picturized first, singing the song; the female version follows later in the story—mostly when the leading lady has been separated from her lover and remembers him through a song he’d sung.

Aji roothkar ab kahaan jaaiyega is one of the exceptions. Rajendra Kumar’s character here plays second fiddle to his lady (Sadhana). She sings the song first, at a party where he is invited and she (this being a party, after all) is begged by everybody to sing a song. Her song is Aji roothkar ab kahaan jaaiyega—ostensibly to soothe her mock-annoyed uncle, but actually directed at her lover. He gets a chance to sing the song to her when trying to stop her from leaving after a date: but since she’s not huffy, he’s not coaxing her. He’s simply daring her to leave: because he will be there, wherever she goes.  Aji humse bachkar ab kahaan jaaiyega.

2. Sab kuchh lutaake hosh mein aaye (Ek Saal, 1957): A man takes on the job of bringing happiness and love into the life of a beautiful heiress who only has a year to live—except that he’s doing so for purely mercenary reasons; it’s all a pretence, he’s doing it for money. But somewhere down the line, his conscience awakes. And sings this song: a song jolting him into a realization of just how he’s betraying the woman he’s fallen in love with.

… and, what better proof of the deep connection between these two characters than that, near the end of this film, the woman (Madhubala) is able to sing the same song which her lover’s conscience sang to him? The words are different, and so is the emotion: his was the guilty conscience speaking, hers is the heartbroken cry of the betrayed.

In most cases of double versions of the male and female type, I end up liking one version better. In this case, I cannot choose between Talat’s version and Lata’s: both are sublime. 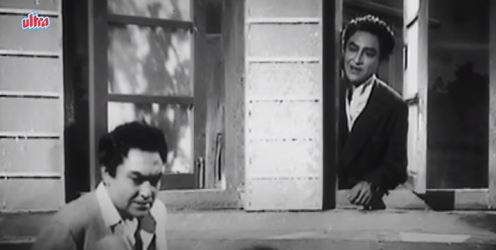 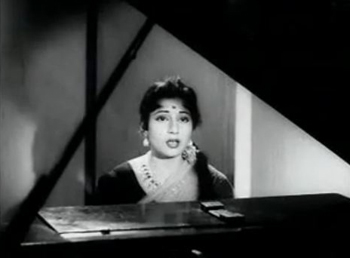 3. Ehsaan tera hoga mujhpar (Junglee, 1961): From one of my favourite films comes this emotional, poignant love song which pleads with the beloved to bestow a favour on the singer: let me stay close, do not push me away. Shammi Kapoor’s character, in Rafi’s voice, sings the song first, wooing back the sweetheart (Saira Banu) who is upset at the way his overbearing mother has pushed her away as being unworthy of her son. The strains and stresses that plague this relationship resurface in the man’s dreams later—and the song resurfaces. This time, his beloved appears in his dreams, begging him (in Lata’s voice) to stay with her.

4. Dil jo na keh saka (Bheegi Raat, 1965): Like Sadhana’s character in Aarzoo, Meena Kumari’s character in Bheegi Raat is the one to first sing a song. And she’s far more daring than Sadhana’s character. Here, on the bheegi raat (‘wet night’, which sounds far more risqué than the Hindi equivalent) in question, the two lovers are caught in a storm and—in typical Hindi film style—It’s the woman who gets drenched and has to exchange her soaked clothing for a sheet. Against a backdrop of sensual carvings, she sings this come-hither song to her (perfectly dry) lover.

And, much later, when misunderstandings galore have wreaked havoc with their lives, the lover sings it back—this time, in a public space, using the song to taunt her for her (perceived) infidelity. The words of the two versions differ, hers being all about romance, his being all about her faithlessness.

5. Jeevan ke safar mein raahi (Munimji, 1955): This is one of those double-version songs where one version is far more popular than the other one (and, as is usually the case—for instance, as in Waadiyaan mera daaman or Ehsaan tera hoga or Dil jo na keh saka—it’s the male version that’s more well-known). The first time Jeevan ke safar mein raahi appears in Munimji, it’s when Nalini Jaywant’s character finds herself and her car hijacked by a daredevil and utterly incorrigible passerby (Dev Anand), who after irritating her with his wild ways, bursts into song to entertain her, and ends up charming her in the process.

Much later, after she has discovered the secret identity this man hides, and the pain that entails, she sings the song back to him. A sad song, also sung in the car. Also when it’s just the two of them on a lonely road. But how circumstances have changed, and how everything has unravelled… 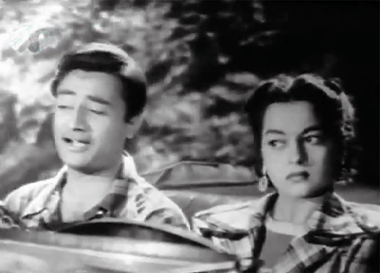 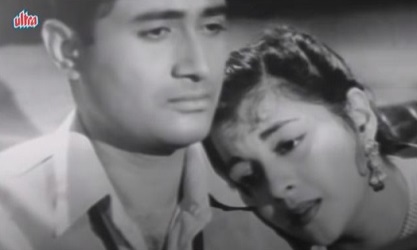 6. Khilte hain gul yahaan (Sharmeelee, 1971): Sharmeelee is one of those films that was released in the 70s—in 1971, to be precise—but has an unmistakably 60s air to it. Its music (SD Burman, superb as always) is great, and this one, probably the most popular of its songs, appears in two versions.

The first time Khilte hain gul yahaan occurs is when Shashi Kapoor’s character, an Army officer, meets the effervescent Kamini (Rakhi) in Kashmir. Immediately besotted, he sings this love song—and then, over the roller-coaster ride that their lives become, ends up separated from Kamini and married to her twin sister Kanchan. Kanchan, seeing the plight of her husband—who hates her and becomes suicidal—decides to pretend to be Kamini in an attempt to bring him back from the brink: and she does that by singing Khilte hain gul yahaan, to start with.

7. Dil lagaakar hum yeh samjhe (Zindagi aur Maut, 1965): Zindagi aur Maut was a fairly typical NA Ansari film: frenetically paced, over the top and an extremely convoluted spy film where the only impression I was left with at the end was of utter confusion—and some lovely songs. C Ramachandra composed the music for Zindagi aur Maut, and the beautiful Dil lagaakar hum yeh samjhe was the jewel in the crown when it came to this film. And, befittingly, it appeared twice in the film, the first time sung by Mahendra Kapoor for Pradeep Kumar’s character when he’s wooing his lady love (Faryal). Later, when (as is usual), things have fallen apart, she sings it (in Asha Bhonsle’s voice)—this time bemoaning the faithlessness of her lover.

8. Mujhko is raat ki tanhaayi mein (Dil Tera Hum Bhi Tere, 1960): Pretty much all multiple version songs have one song in a happy and upbeat mood. The other may or may not be happy (some are, though they’re rare). Even rarer is the multiple version song where both versions are depressing and unhappy. From one of Dharmendra’s earliest films is this aching song of lovers separated and missing each other. Both songs occur within the last half hour of Dil Bhi Tera Hum Bhi Tere. First Dharmendra’s character, separated from the girl (Kumkum) whom he loves, sings of his woe and how much he’s missing her (this is one of my favourite Mukesh songs). Then, just before the happy end, Kumkum’s character, disabled and therefore distancing herself from her beloved (she doesn’t want to be a ‘burden’ on him) sings it too.

9. Jiya o jiya o jiya kuchh bol do (Jab Pyaar Kisise Hota Hai, 1961): Dev Anand seems to have acted in several films which featured multiple version songs (and I’ve not even included Ae dil kahaan teri manzil, Tum toh dil ke taar chhedkar, Abhi na jaao chhodkar, and Na tum humein jaano in this list). This is one double version song that pretty much exemplifies this type of song. The male version (sung by Rafi) occurs close to the beginning of the film: Dev Anand’s character, in almost Shammi Kapoor-madcap style starts singing while riding atop a car, addressing his song to the girl (Asha Parekh) in the train alongside, and livens things up by eventually jumping on to the train.

Later in the film, long after the two have fallen in love, they fall apart, their relationship riven by misunderstandings. Misunderstandings mostly on the part of the woman, who—when she realizes how wrong she was—uses the same song to say sorry and coax him back. Interestingly, the fast pace of the song doesn’t change even in the female version, though Lata does introduce a note of near-despair in it, reflecting the character’s desperation.

10. Aa lautke aaja mere meet (Rani Rupmati, 1957): And, to end, a song from a film which was a veritable parade of great songs. Rani Rupmati may have been somewhat dodgy on the historicity front, but when it came to music, SN Tripathi (who also directed the film) gave this film some really fine classical-based songs. Of all the songs of Rani Rupmati, possibly the most popular of them all is this one, sung in two versions: one by Mukesh (for Bharat Bhushan) and the other by Lata (for Nirupa Roy). A song of yearning for the beloved, telling them that without their presence, the singer’s music has gone flat and dull and lonely… if this is what eroded music sounds like, I wonder what music at a perfect pitch would be. 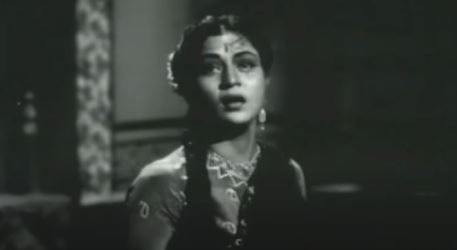 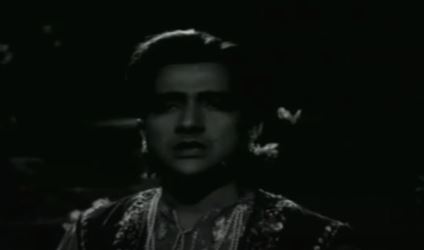 Which are your favourite songs that fit these criteria?