Today is the birth centenary of one of science fiction’s greatest writers, Ray Bradbury. Bradbury, born August 22, 1920 in Waukegan, Illinois (USA) was a hugely prolific writer, specializing in science fiction though he also wrote in other genres, especially horror and mystery. Dubbed by The New York Times as “the writer most responsible for bringing modern science fiction into the literary mainstream”, Bradbury wrote 27 novels and over 600 short stories, and inspired countless writers (including some blatant plagiarists!)

I knew that there have been many, many screen adaptations of Bradbury’s stories (I have seen several), and I wanted to review one of these to commemorate his hundredth birthday. Possibly the most famous film based on a Bradbury book is the screen adaptation of his landmark dystopian novel, Fahrenheit 451; but that film I had already reviewed. And, going through Bradbury’s filmography on IMDB, I found that most screen adaptations of his works have been either TV series (which I don’t review) or have been made in the years since 1970—which falls outside the ambit of this blog.

But this film, released in 1953, fits my blog. And, instead of being based on a Bradbury novel, it was as close as it gets: the screenplay for It Came From Outer Space was written by Bradbury. 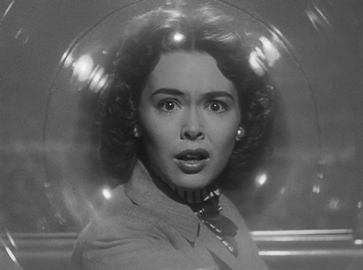 The story is set in Sand Rock County, Arizona., and begins one night a little outside town. Amateur astronomer John Putnam (Richard Carlson) and his fiancée Ellen (Barbara Rush) are at his home, looking up at the stars when they see a huge flaming thing—John guesses it’s a meteor—come flying through the sky and crash nearby, at what used to be an old mine. 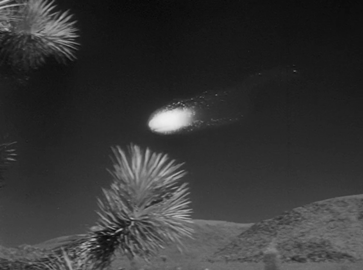 While John and Ellen are mulling over what they saw, we get a closer glimpse of what’s happening at the site of the crash. When the dust has settled, we see that a huge sphere, its surface marked with a beehive-like pattern, is in the crater that’s been formed. A hexagonal door slides open in the face of the object and something emerges. Something that is very briefly glimpsed, too brief for us to get a proper impression of what it is: something that wears a convex glass helmet and leaves behind a trail of what looks like stardust.

John, being after all an astronomer, is very interested in the ‘meteor crash’, and he quickly hires the services of Pete, who pilots a crop-dusting helicopter. Ellen and John are ferried out to the site of the crash by Pete, and while Pete and Ellen watch from the lip of the crater, John goes down into the crater.

He walks right up to the base of the crater, and finds something very odd indeed. Definitely something that has no business being here.  John catches an all-too-brief glimpse of something moving inside the portal, before the hexagon slides back into place…

… so hard that it triggers a rockslide. With rocks falling all around, John has a hard time getting to safety. When he gets up back to Ellen and Pete and tries to tell them what happened, neither is inclined to believe John. As it is, the rockslide has filled up the place, and nothing can be seen of the ‘ship’ John claims is lying at the bottom of the crater.

Pretty much all of Sand Rock has witnessed the ‘meteor’ coming down, and lots of people, including the press and the local police, turn out to see what it’s all about. John finds himself at the receiving end of jokes, contempt, and general disbelief. He tries initially to convince people, but to no avail. Later, a prominent astronomer from a government observatory comes by, a man whom John knows, but even he, after studying the site, can find nothing to indicate that anything arrived here from outer space.

John is disgusted at the way these people are behaving. Ellen, though she doesn’t really believe John either, is at least not outright sceptical. They head home, John driving down the desert highway, when suddenly, out of the dark, something comes hurtling out of the night. Something with a huge convex helmet-like thing on top. 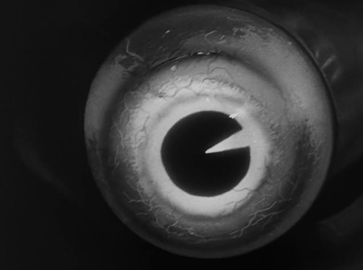 John brakes hard, Ellen screams, but when John gets out of the car to see what it was that he might have run over, there’s nothing. He shines his torch on the area beside the road, and the light illuminates a Joshua tree. Momentarily, both John and Ellen are startled: they think it’s someone out there. But John reassures Ellen; it’s all right, it’s just a tree. 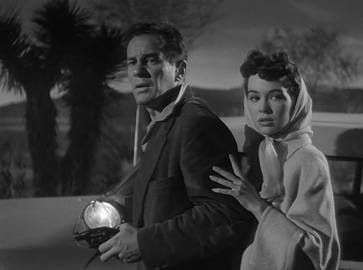 John puts away his torch, and they get back in and drive on. Under the Joshua tree and beyond it, the moonlight shines on a track that looks suspiciously like stardust…

Ellen may now be convinced, because she’s seen it with her own eyes, whatever it is. But everybody else still thinks John’s seeing things. The local sheriff, Matt Warren (Charles Drake), who is also in love with Ellen, is especially sceptical, scornfully so.

The day after they saw that weird apparition on the highway, Ellen again goes out with John to investigate. This time, they meet two telephone linemen at work. Frank (Joe Sawyer) and George (Russell Johnson) are going down the line, checking, and just as John and Ellen come along, Frank hears an odd sound, a musical sort of note, on the line. It’s like nothing he’s heard in all these years.

John listens too, but the sound, strange though it is, vanishes after a while. John and Ellen go their way, after John’s told Frank and George to keep an eye out for anything odd.

Which, unknown to any of them, is just minutes away…

It Came From Outer Space won Barbara Rush a Golden Globe award for most promising female newcomer, and the film was nominated to the American Film Institute (AFI)’s list of top ten science fiction films (though it didn’t make the final list). If you’ve seen all the dozens of alien invasion films of recent years, this one will probably strike you as pretty tame, but it has a certain uniqueness in the way it handles the idea of extra-terrestrials visiting Earth.

What I liked about the film:

Its premise regarding the nature of the aliens and their intentions, which is quite different from the usual. I won’t go into detail about this, but suffice to say that it came as a breath of fresh air to have aliens like this. Interestingly, it appears that Bradbury offered the studio two options regarding the nature of the aliens, and this was what was chosen: it shows, I think, a level of maturity in the people who took the decisions, to steer clear from the predictable.

The special effects. No, it’s not as if they’re fantastic, but because they’re low-key and in keeping with what was possible at the time, given existing technology, they’re believable. I like that there aren’t obviously men-in-monster-costumes wandering about. The ambiguity about the aliens’ appearance, the somewhat tangential hints at their physical qualities, are a good move in this respect.

And, the Joshua trees, the desert landscape: it adds a lot to the atmosphere.

I can’t say there’s anything I especially didn’t like about It Came From Outer Space, but it’s not, as far as I’m concerned, the sort of film I will remember till the day I die. Entertaining enough, a little unusual in the way it approaches aliens, and with some moments of pretty good suspense. Not fabulous, but by no means bad.

If for nothing else, watch it for a taste of Bradbury.