Within the first fifteen minutes, I’d begun to tire of the unrelenting slapstick this film was.

Chandan (Kishore Kumar) is an inveterate prankster. He lives to joke about, pull pranks on people, and generally drive them up the wall. He and his friends try to pass it all off as part of being young, but Chandan gets on the nerves of just about everybody else. 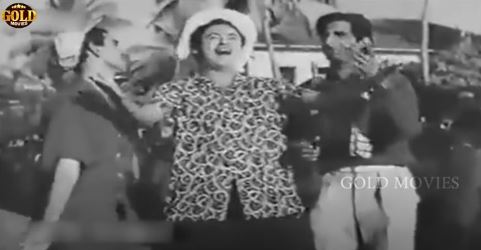 Including his fiancée Shabnam (Meena Kumari), who keeps telling Chandan to get lost. But, as Shabnam confides to her sister Bimla ‘Billi’ (?), Shabnam actually really does love Chandan. This does not make me think highly of Shabnam’s intellect or her taste in men. Why and how Shabnam and Chandan ever got engaged is left to our imagination…

… but it’s obvious that Shabnam’s father is having second thoughts. He tells the pandit (who was the go-between for the match), and the pandit tells Chandan’s mother. Chandan had better stop the buffoonery before his prospective father-in-law gives him the boot.

Chandan’s mother warns him, but Chandan isn’t inclined to listen. He’s already played a prank on Shabnam’s father, disguising himself as an old employee at the post office and sending Daddy off on a wild goose chase so that Chandan can spend some time with Shabnam…

And he disguises himself as a widow, come to Shabnam’s home (with a bunch of his disreputable friends, all similarly disguised) to beg for some funds for a widows’ home.

The long and short of this is that Shabnam’s father decides enough is enough. He finds a much more eligible bridegroom for Shabnam, a man more worthy than this lunatic, and uses emotional blackmail (holding a pistol to his own head) to bully Shabnam into agreeing to the match. 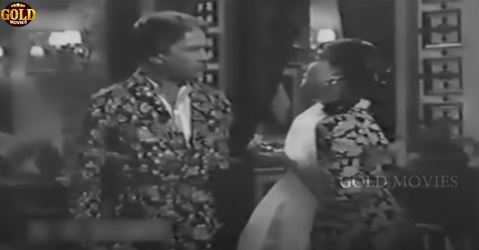 Shabnam, thus bulldozed into marrying another man, writes a sad letter to Chandan, and delivers it herself, weeping all the while, and leaving Chandan pretty weepy too. After that, Shabnam goes off to her vivaah mandap and marries Suraj (Raj Kumar). Chandan, meanwhile, writes a suicide note and proceeds to kill himself.

And, Shabnam’s friends and family are so utterly brainless, they have no qualms about gossiping about Chandan’s suicide while the wedding ceremony is in progress. Worse, nobody thinks of hiding the truth from Shabnam (knowing full well that Shabnam was till recently engaged to Chandan). Shabnam hears the news of Chandan’s death and faints right there in the mandap. 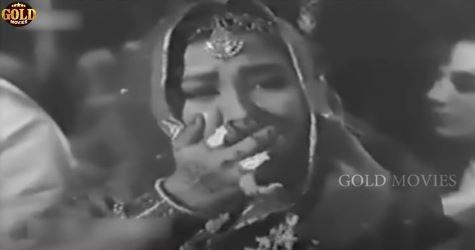 The next morning (Shabnam, thanks to the faint, has been spared the necessity of a suhaag raat), Shabnam’s doli is going through the streets to Suraj’s house. With much band-baaja and loud music, the little procession is moving along when it crosses paths with the funeral procession carrying Chandan’s corpse. Very symbolic and very macabre.

Anyhow, Chandan’s dead and gone, and Shabnam is now in her husband’s home. She is taken into her bedroom by Suraj’s aunt (Indira Bansal), made to sit on a suitably flower-strewn bed, and gently told to wait for Suraj.

But the person who comes along shortly after, frightening Shabnam out of her wits (and into yet another swoon) is…

No, don’t get your hopes up. This isn’t another Jhuk Gaya Aasmaan.

The music. Shankar-Jaikishan scored the music for Sharaarat, to lyrics by long-standing collaborators Hasrat Jaipuri and Shailendra. All the songs are hummable, but a few stand out: Hum matwaale naujawaan manzilon ke ujaale, Tera teer o be peer, and Ajab hai daastaan teri ae zindagi (one of the several songs for which Kishore Kumar lip-synced to another playback singer’s voice; in this case, Mohammad Rafi).

Much of the rest of Sharaarat. But, to start with: the story, which has a very odd balance between the two halves of the film. The first half, up to the point Shabnam’s father insists she marries Suraj, is almost painfully slapstick, with Chandan switching from one bad disguise to another, pulling a series of stupid pranks on people (primarily Shabnam), and just generally being a pain in the neck. The second half of the film, barring a few songs and romantic sequences (including some lacklustre ‘comedy’ featuring Kumkum and Rajendranath along with Kishore), is very different in tone: it’s ‘serious’, to the point of being over-the- top melodramatic and weepy in the last fifteen minutes or so. By the end of the film, I couldn’t believe this was the same film I’d started watching about two hours earlier.

With a story like that, the otherwise fairly dependable cast isn’t at its best either. Meena Kumari quickly goes from light-hearted (if somewhat dim-witted, given her easy acceptance of Chandan’s idiocy) to weepy. Kishore Kumar is slightly bearable in the second half of the film, but only slightly. And Raj Kumar, never one of my favourites in the first place, gets cast as a really nasty character—nasty in the sense of being that regressively patriarchal, oppressive sort who thinks his izzat is dependent on what other people think. Ugh.

Anyway. If you love the songs (I do), watch them on Youtube. Give the film a miss.