I began this blog in November 2008, and in the eleven years since, I’ve never done a post for Teachers’ Day. That is mostly because I did not have great memories of teachers from my school days. A handful were good, a handful left an impact on me; but the majority were people I did not look back on with fondness or gratitude or any other such emotion. More often than not, if you were to ask whom I would thank for moulding me in my childhood, I’d say it was my parents. They were my first teachers, and even till fairly late, they continued to be the people who influenced me the most.

These days, however, I am feeling a love for teachers. My six-year old daughter, the Little One (the ‘LO’) is attending online classes, and when I see the patience, the calm, the classroom manner (that’s the best term I can think of for what would be bedside manner in a doctor) I cannot help but admire these teachers. They maintain their composure through connectivity issues, bossy and demanding parents, excessively chatty children, and sometimes just sheer lack of tech-savviness. Through it all, they’ve continued teaching our children their lessons.

So, in appreciation, a list of songs for teachers and students. To commemorate the classroom, the bond between taught and teacher, and education itself. As always, these songs are from pre-1970s films that I’ve seen.

1. Alif zabar aa alif zer ae (Love in Simla, 1960): For most of us, parents are our very earliest teachers. For many of the unfortunate children who have little or no access to an online class, parents can again adopt the role of teachers, to whatever extent possible.

And it’s not just parents: it can also be other people, and the child in question may have varied reasons for being taught by someone who’s not a professional teacher. In Love in Simla, for instance, the boy is sitting around at home during a holiday and needs help with his Urdu. That’s when his elder sister’s boyfriend, with a view to earning brownie points, jumps in to help.  The Urdu lesson starts off well enough (and coherently enough) as they go through the alphabet, but somewhere down the line the lesson goes off the rails, both tutor and tutee going a bit nuts.

2. Ek do teen chaar aur paanch (Kaagaz ke Phool, 1959): Even when one has teachers other than one’s parents, there are times when the school isn’t a formal one. When, for instance, classes are held out in the open (and not always in idyllic surroundings), the teacher isn’t a trained one, and all teaching is somewhat haphazard. As in this case, where the children sit under a tree, and the teacher (a lovely Waheeda Rehman) is actually an actress. Of course, teaching little children mathematics isn’t a big deal, but she, instead of merely teaching her students the numbers from 1 to 10, also makes her lesson a reflection of human life: of the petty politics that govern social interactions, the bitterness and quarrelling. I do wonder how much of that deeper meaning children that small would understand…

3. Ichak daana beechak daana (Shree 420, 1955): The quintessential ‘informal school’ song: Nargis plays the fun-loving teacher in this lovely little bunch of riddles. Wonderful little riddles, about chillies and ears of corn, peacocks and pomegranates. I’m not sure if this could be considered a proper lesson (what would she be teaching? Hindi?), but it’s fun. And the children are certainly much cleverer than an onlooker who eventually joins in, gatecrashing and posing a riddle (not a very good one, and completely self-serving) of his own.

4. Kuchh din pehle ek taal mein (Laajwanti, 1958): Nargis again, playing a teacher, and again in what is a very informal sort of school. Again, her ‘class’ sits out in the open, though in somewhat more upmarket, comfortable surroundings. There is only a fleeting mention of anything akin to formal education here: when her class refuses to study and demands a story instead, the teacher chides them: will stories get them through their exams? But she does bend to general opinion, and tells them the sad story of two swans that were separated by fate. Not quite the thing to tell little kids, I’d have thought, but it’s a lovely, melodious song.

5. Kitna pyaara pyaara mausam (Naunihaal, 1967): I have some very vivid memories of my long-ago schooldays, and of those among the fondest is of the only school picnic I remember having gone on: we went to Kokernag, near Srinagar. I don’t recall our teachers singing or dancing, but I remember, with much warmth, the sheer joy and excitement of that day. Of being with friends but not having to study. Of seeing our teachers letting their hair down a bit.

So, a song celebrating the school picnic, with teachers and students getting together to have some fun. They swing, they wade through the shallows of a stream. They sing and dance. The teacher (a very pretty Indrani Mukherjee) does give the boys a brief spiel on being good, but otherwise it’s all a paean to the lovely day this is, and what joy surrounds them. A cute, happy song.

6. Aao bachchon tumhe dikhaayein (Jagriti, 1954): Another teacher-and-children-on-a-jaunt. This one, though, is a much more extended jaunt, no school picnic. Abhi Bhattacharya’s revolutionary school teacher, in an attempt to get his jaded students interested in the things around them, takes them on a Bharat darshan. From the Himalayas to Rajasthan, from Shivaji’s Maharashtra to Amritsar’s Jallianwala Bagh, and finally to Netaji Subhash Chandra Bose’s Bengal. A pan-India trip with a focus on nationalism, but there’s a catchiness to this song, its music as well as its lyrics and rendition (both of the latter by Kavi Pradeep).

7. Daali pe baitheen thheen dus chidiyaan (Deep Jalta Rahe, 1959): Back to the classroom, and with a song that actually does have something of mathematics in it. The teacher (played by Ranjana) tests her students’ skill at subtraction. Ten birds are sitting on a branch: one flies off and how many are left? The nine birds left fly off then to perch on the giant boot at Kamla Nehru Park. From there, another two fly away, and so on. The birds traipse around, ending up at Parliament House via Calcutta’s Maidan. At each stage, the students are asked to calculate how many birds we’re now left with.

One of the rare songs that actually have something of a core subject being taught (rather than mere faffing). What irks me, though, are the props the teacher uses: live birds, a projector and film reels, a plaster model of Parliament House: all quite unlikely, and quite impractical—especially the birds.

8. Humne suna tha ek hai Bharat (Didi, 1959): I have hazy memories of, very early in my school days, having to study something called Moral Science. Basically the sort of stuff expected to make you a ‘good’ person: don’t tell lies, don’t cheat, don’t steal, etc. Moral Science was abandoned by the time we had launched into more ‘serious’ subjects like History, Geography and Civics and so on.

In this class, though, the teacher played by Sunil Dutt seems to be teaching something that straddles History, Civics, and Moral Science, with perhaps some Philosophy thrown in. He addresses all the many questions his students have, about how a ‘perfect’ India need not be equated with a ‘uniform’ India. I love the core message of this song: that diversity is the basis of India’s secularism, that this diversity is to be cherished, and how intolerance and communal hatred today is a legacy of the Divide and Rule policy of the British. If only more lessons of this kind would be imparted to our children. 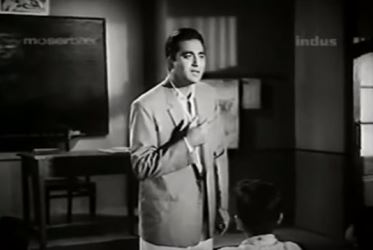 9. Insaaf ki dagar pe (Ganga Jamuna, 1961): Another song about patriotism and morality. A kindly school teacher, in this song set in a village school, tells his students how they are the future of India, and how it’s important for them to uphold justice and right. It’s not an easy path, he says; they must remain steadfast and careful, always looking to do what is good and right. I do not agree with the ‘Duniya ke ranj sehna aur kuchh na moonh se kehna’ bit—it’s too martyrish and wishy-washy for me (and really, how can you fight for the truth and for justice if you refuse to speak up?), but the rest of the song is fine. And the music, along with Hemant’s rendition, is lovely.

10. Aaj miyanji ko chadh jaaye bukhaar (Mirza Sahiban, 1947): And, to end the list, a somewhat offbeat song. A tongue-in-cheek tribute to the rather more mundane side of the classroom bond between teachers and students. Which student, after all, always and every time loved studies? I was often referred to as an ‘exemplary student’ by my teachers, and I actually liked attending some of the classes. I was diligent and attentive and hard-working. But. But, I loved it when we had holidays, for whatever reason. No school was my idea of bliss.

This, therefore. From Noorjehan’s last film in India, a song which doesn’t feature a teacher, but is actually all about the teacher. In a village school, while they wait for their teacher (‘Miyanji’) to arrive, Miyanji’s students wish Miyanji would get a fever so that they could have a day off. One of them even suggests he’ll do something akin to what most Indian schools do on Teachers’ Day: he’ll take the place of Miyanji, and behave like him. Which means sitting a mile away, droning on, and letting fly with his shoes whenever anybody in his class is guilty of any infraction.

Happy Teachers’ Day to all the teachers and students out there, and here’s to the bond between them!

94 thoughts on “Teachers and Students: Ten of my favourite songs”