Beth, commenting upon Arsenic and Old Lace, said she didn’t like films that she labelled `wackadoodle’ (what a delightfully apt word: each syllable says it all!): all that frantic running around and the ceaseless activity was just too exhausting for the viewer.
This review, therefore, even though I saw the film before Beth posted that comment, is dedicated to Beth. Because Les Vacances de Monsieur Hulot (Mr Hulot’s Holiday) is a film sure to appeal to anyone who likes their humour less fast-paced.

Mr Hulot (Jacques Tati, who also directed the film) is a big, ungainly man who wears too-short trousers and a floppy hat, and drives a sputtering car that proceeds at a snail’s pace, letting off ominous bangs every few metres. One summer, Mr Hulot goes to a small seaside village in Brittany for his holiday and stays at the Hotel de la Plage. At the hotel, he becomes acquainted with various other residents—and the hotel’s staff—and spends the next week playing tennis, boating, picnicking, going riding (or at least endeavouring to do so), and gatecrashing a funeral, among other deeds and misdeeds.

End of story.
Really. This is one film for which I can’t possibly write a synopsis, simply because there isn’t one: it’s a string of episodes strung together. There are no twists and turns in the plot, no startling revelations or moments of utter joy or sheer misery—because there isn’t any plot. The film meanders gently along, at a pace that’s as leisurely as a peaceful beach holiday in the early 50’s, with nothing much happening except isolated incidents that no one person should have to go through in the course of one vacation.

And one person doesn’t go through them anyway; the action, such as it is, spreads pretty evenly across the lives of the holidaymakers at the Hotel de la Plage.
There is, for instance, the lovely, quiet and ever-smiling Martine (Nathalie Pascaud), who soon attracts a fan following among all the impressionable young men in town—especially one pedantic creature who spouts political philosophy.

And the Schmutzes—husband, wife and son, with the wife and son constantly having to fend for themselves because Daddy is off receiving yet another business phone call.

There is the cheerful Englishwoman (Valentine Camax, in a role that’s a caricature through and through) who speaks only English all the time. 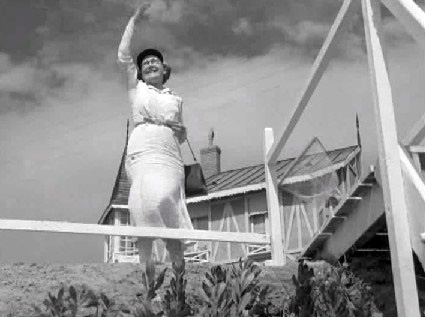 There is the retired commander (André Dubois) who organises everything—including the community picnic they go on—like a military campaign. 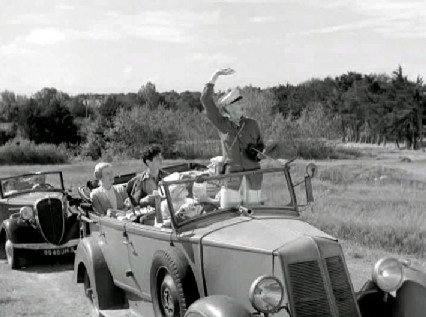 And, my favourites: the elderly couple (Marguerite Gérard and Réné Lacourt) who are always the first to arrive for meals at the Hotel de la Plage’s dining room. When they aren’t eating, they’re strolling through town or along the beach. The wife’s always a couple of steps ahead, gushing over everything they’re passing; the husband’s moving patiently along in her wake, adeptly fielding everything she sends his way—from comments on the surroundings to pretty seashells (which he surreptitiously throws away). 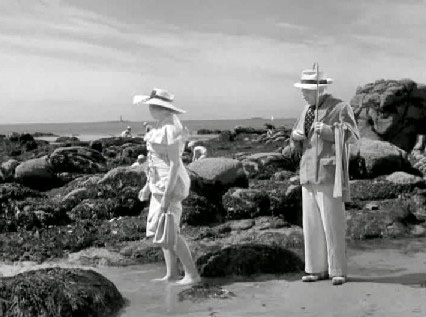 Threaded through all of this are the antics, mostly unmeditated, of Mr Hulot, whose efforts to have a good holiday take their toll on his fellow holidaymakers. He goes kayaking in the bay, and his kayak (which he stepped into rather hard, and which has therefore got a great big dent across the bottom) folds up and does a passable imitation of a snapping shark, thus causing panic amongst sunbathers and swimmers alike: 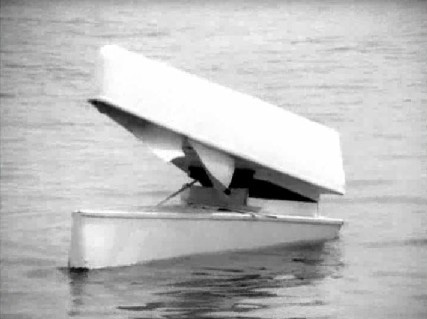 When he gives an acquaintance a lift, Mr Hulot’s terribly temperamental car bursts a tire, goes out of control, trundles into a cemetery, and comes to a standstill. Mr Hulot thinks nothing of getting out and fixing the tire there and then—and the tire tube, lying on a bed of wet leaves, immediately gets a coating of leaves and ends up being mistaken for a wreath… 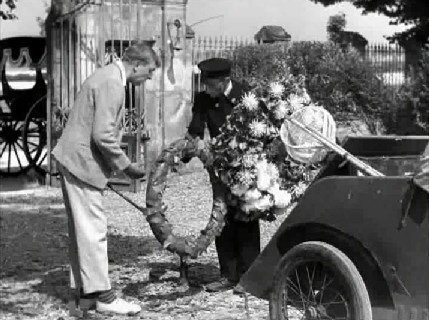 And so on and so forth. Mr Hulot ends up in equally absurd situations involving everything from a lost table-tennis ball to a recalcitrant pony, a crookedly hung picture to an overloaded rucksack.
There is nothing in the way of story here; just a series of snapshots of the people whom Mr Hulot meets and comes to know for a brief period. There is even very little dialogue (and much of it utterly inconsequential—the Englishwoman acting as referee at a tennis match and calling out the score; Martine’s admirer reading out boring passages to her; the waiters placing the diners’ orders in the kitchen).

When I first began watching Les Vacances de Monsieur Hulot (having previously seen the ratings on imdb and noticed that some people had called it the funniest film ever made), I was a little disappointed. It didn’t seem to be going anywhere. Nothing was happening—for the first five minutes (or was it more?) even the subtitles didn’t appear. Gradually, though, the film began to grow on me: a lot, really, like a quiet holiday. You don’t know the people and the place for the first few minutes/hours/days. You spend your first hours or days by yourself, pottering about and trying to settle in. Then, as you begin seeing the same people over and over again around you at meals, walking by and doing the same things you’re doing—sunbathing, swimming, riding, cycling, whatever—you begin recognising faces and putting names and relationships to them. You become more comfortable with all that’s happening around you, even though it isn’t high drama.

Les Vacances de Monsieur Hulot is a lot like that: as the scenes pass, with Mr Hulot unwittingly making life miserable for those who live and work at the Hotel de la Plage, you begin to recognise the people around (even though very few of them are ever named). You watch them play bridge, attend a masked ball (at which the only people are Mr Hulot, Martine, and a few children), go on a picnic—or simply stroll around, come rain or sunshine. They’re all so much like people we’ve encountered on holidays (perhaps a bit like us, too? My husband’s constantly standing by patiently while I photograph wildflowers or get excited about pretty seashells). There’s the inevitable someone who, even on holiday, won’t actually stop working. There are those who will want everything to be as it is at home, down to the language. There will be the fitness fanatics, the party fanatics, the whatever-is-the-latest fad fanatics.

Some have compared this to Mr Bean’s Holiday, which it does resemble—or should that be vice-versa, since Les Vacances de Monsieur Hulot is the older of the two? I, personally, found this to be more Chaplinesque than anything else. Even though it is funny (very much so), there’s an underlying bittersweet touch to it—in Martine and Mr Hulot’s going-nowhere friendship/romance, for instance—that plumbs greater depths than the hardcore comedy of Mr Bean. The almost silent treatment of the film helps reinforce the resemblance, as does Mr Hulot’s character: a sweet, chivalrous man who invariably ends up wrecking things and/or making a fool of himself, all by accident.

Even if you ignore the philosophy of the film, watch it for the comedy: Mr Hulot’s antics are a scream. True, there’s loads of slapstick here, but it is funny. I’m already itching for a rewatch.

And since I’ve more or less said all I liked about the film, here’s what I didn’t like:

The scene with the fireworks. The rest of the film is disjointed in a charming way, but this bit irritated me. What was Hulot doing in the shed with the fireworks? How did he get there? (Okay, maybe my DVD had some crucial scenes missing here, but this just didn’t make sense). Minor grouse, though.