Two eateries, both with sort of simian names, opened their doors in South Delhi around the same time. One was Monkey Bar (which we’ve still not got around to visiting, even though we’ve heard good things about it). The other was The Hungry Monkey, which—on the strength of an attractive-sounding Asian style pork ribs—we thought we really should visit. (As it happened, they’d taken the ribs off the menu).

The stairs, and some interesting lights, at The Hungry Monkey.

The Hungry Monkey sits on the second floor (no lift that we could see), above the very visible Café Coffee Day outlet at the DDA Market, Safdarjang Enclave. The restaurant’s décor is stylishly minimalistic (“Like one of those New York loft restaurants,” said my husband). Barring a bunch of quirky cage-like lampholders of black wire hanging from the ceiling, and interesting little quotes here and there (“The universe is made up of stories, not atoms”, written across a tabletop), there’s no fancy décor here. One brick wall is haphazardly painted white. Other walls are black or brown. There’s a lot of wood. No curtains, just a view of the green expanse of the Deer Park beyond. No flowers, no paintings on the walls, no wallpaper, just stark simplicity. The music deserves a special mention: a fabulous array of jazz, world music, and more that was very classy and easy on the ears. 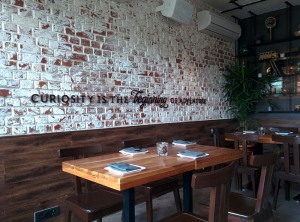 Philosophy on a wall.

The restaurant is on two levels—a staircase leads up to a terrace as well, though we didn’t venture there. Instead, since the first level was empty, we let the host seat us there, at a table with a squat glass half-full of coffee beans as its centrepiece.

The menu at The Hungry Monkey (which describes itself—on the sign outside the restaurant—as ‘European’) is actually rather more eclectic than that. No, no paneer tikka or tandoori chicken here, but certainly more than European. This isn’t a vast and unwieldy menu, either; there are less than half a dozen options each for soups, salad, starters, mains, and desserts, so choosing what we wanted to eat wasn’t such a huge task.

A table at The Hungry Monkey.

Since we did want to try a little bit of as many courses as we could manage, my husband and I decided to share a starter (calamari fritti with wasabi aioli, though we were very tempted by the chicken liver pâté). Although there are a range of mains, we both settled for the same thing: a Vietnamese banh mi sandwich. Both of us passed up drinks, though The Hungry Monkey does offer a variety of soft drinks, juices, mocktails, shakes, teas and coffees.

We’d barely finished placing our order when the waiter brought us complimentary bread and dip. The bread, a fluffy focaccia-like thing in a cute mini fry pan, was herby and delicious, with a little butter oozing from the middle. It was excellent, and even more so with the sundried tomato dip it was served with.

A delicious start to the meal: a buttery herby bread and a sundried tomato dip.

Our starter arrived within ten minutes of our having ordered it. This was served up on a wooden platter, with the calamari rings in a little bucket, and the wasabi aioli in a white ceramic sauce boat alongside. The good bit, first: the batter, tempura-thin and golden, was beautifully crisp and light, and the aioli tasted good. The bad part? The calamari was a wee bit overcooked and slightly rubbery; and, as we proceeded down the bucket, the calamari got more and more oily. We came to the conclusion that it had probably not been drained before being bunged into the bucket.

Calamari fritti at The Hungry Monkey.

My husband, who’s a wasabi fanatic, said he’d have liked far more wasabi in aioli. I agreed, but then that’s subjective, since I guess a lot of people aren’t as mad about wasabi as we are.

Shortly after we’d finished the calamari and our plates had been cleared away, our sandwiches arrived. The Vietnamese banh mi, according to the menu, was ‘five spice roast pork, ham, pâté and pickled vegetables on a French baguette’. The baguette, to start with, wasn’t the crisp-crusted French baguette we’d expected; it was, as far as texture went, rather like an uninteresting burger bun. (Later, we were to discover that the usual Vietnamese baguette has a lighter crust and a not very dense crumb. In that case, I’d expect the menu to not describe the sandwich as including a French baguette). 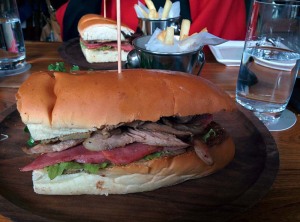 Filled with ham, ‘five spice roast pork’, chicken liver pate and pickled vegetables, this one didn’t deliver on its promises.

The filling, while substantial, was unremarkable. Yes, the chicken liver pâté smeared liberally on the inside of the baguette was delicious and provided a great, distinctive flavour to the sandwich; but the pickled vegetables were conspicuous by their absence (the only sign of anything vegetal was lettuce). There was lots of not-too-good quality ham, and the roast pork—in strips, not too many of them—did not taste at all of five spice powder. Such a shame.

On the side came a tiny metal bucket with a few French fries. On the wooden plate, alongside the sandwich, came a helping of salad—rocket leaves and two halves of a cherry tomato, tossed with a light dressing and a few very meagre shavings of parmesan. Incidentally, both of us questioned the use of a wooden plate (both the salad and the sandwich rested on the plate): wood isn’t the most hygienic of surfaces, and we could already see scratches on the plates. How long before these began soaking up juices and oil and germs from meals past? Shudder.

The good thing about the main course was that it tasted fine (not unforgettable) and the portion size was very impressive. In fact, so impressive that both my husband and I ended up leaving parts of the baguette at the very end because we also wanted to leave room for dessert.

Dessert options at The Hungry Monkey are fairly limited: there were just four options on the menu. Of these, I chose the coconut French toast with caramelised pineapple, while my husband ordered the classic vanilla crème brulée. These arrived after about ten minutes of waiting. The vanilla crème brulée, garnished with quartered strawberries and with a little praline on the side, had a deep gold-brown crackly shell of burnt sugar on top, and a nicely steamed custard below: a good dessert.

The coconut French toast, in contrast, was a bit of a let-down. The caramelised pineapple (a thin slice) was definitely cooked, but lacked the char of something that’s billed as ‘caramelised’. There were far too many mint leaves scattered all over the dish, and the biggest disappointment was the French toast itself. This was made of a fruit bread, soaked in milk and egg and cooked the way a classic pain perdu is made. But when you’re using a fruit bread for a French toast, you use a good raisin bread or a bread with other dry or candied fruit, not a Mongini’s style bread studded with bits of red petha! That, for me, ruined the dish—which, incidentally, had no flavour of coconut in it.

We paid Rs 2,322 for our meal, inclusive of all taxes and service charges. Even though that’s not as expensive as some other places I’ve dined at, it’s not cheap. And, while the ambience is smart and likeable, the staff attentive (note: all through, ours was only one of two tables) and some of the food good, I’d expect—for that price—a flawless meal. I doubt if we’ll be going back here.