Every now and then (recently, with alarming frequency) I come across films that do an about-turn midway through. Either they start off being happy and degenerate into utter despondency; or they are intelligent to start with and then descend into idiocy. Marine Drive is a prime example of a film that manages to become irritatingly nonsensical almost exactly at the half-way mark. 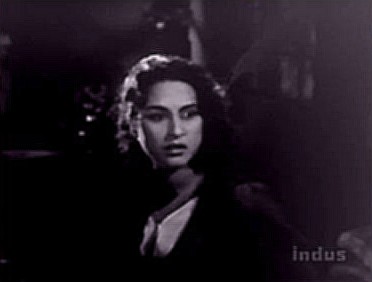 It begins on a windy beach in Bombay, where a lonely trio is standing, watching the waves roll in. They are Khanna (K N Singh), the chief of a gang of smugglers; Ajit (Ajit), his right-hand man; and Dolly (Mohana), his moll. They’re waiting for a consignment of gold to be delivered, but just as the gold arrives, so do the police, and Khanna, Ajit and Dolly make a dash for it.

Ajit goes off on a motorbike, while Khanna bundles Dolly and another of his henchmen into a car and drives off, chased by the police. For some odd reason, despite the fact that both the other guy and Dolly—a tough cookie—are in the car, Khanna ends up doing the driving and all the shooting. No wonder he doesn’t hit a thing. 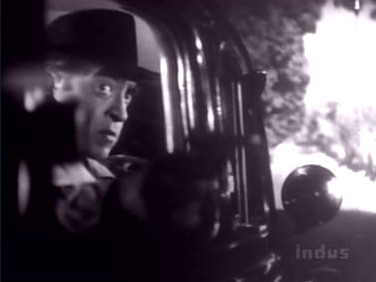 At their hideout, a very secular group (including a Pathan, a Sindhi and a Parsi) of crooked merchants is waiting impatiently for Khanna and the gold. These guys have apparently loaned Khanna money to bring in the gold, and now—in the absence of the gold—they want their money back. After spewing some threats at Khanna, they finally go off.

Dolly tries to console Khanna by repeating, like a stuck record, that “everything will be all right, darling.” Ajit comes in, agrees with Khanna that they’ll need to find the money to back the merchants, and assures Khanna of his own loyalty. The issue of loyalty is hammered home a while later, when Khanna cold-bloodedly shoots a gang member who wants to quit the business.

The mood is lightened a bit by a song-and-dance. Unfortunately no Helen, but what lyrics! Aji tum aur hum, hon saath-saath aur mast raat, duniya ko maar do bumb. For those who need subtitles, here’s a rough translation: If you and I are together, and the night is joyous, drop a bomb on the world. Huh?! The lyricists, Sahir Ludhianvi and Qamar Jalalabadi, were definitely capable of much better than this.

This is followed by yet another digression. Ajit goes to meet a crooked financier called Karorimal (I’m not sure who this is; looks like Nemo). Karorimal is in cahoots with Khanna, and Khanna’s asked him for money. While Ajit’s with him, Karorimal has another visitor: a small-time film producer called Johnny (Johnny Walker) who wants Karorimal to finance his film. Johnny gives Karorimal a taste of what the film will be like (this isn’t as good as Mehmood’s superb enacting in Pyaar Kiye Jaa—one of the best comedy scenes ever, in my opinion).

What it boils down to is this: Karorimal will give Johnny 2 lakhs, but Johnny has to put in 25 grand of his own. It’s an obvious con but Johnny is too naïve to catch on.
While Johnny’s trying to scrape together the 25 grand, Khanna is worrying, along with Dolly and Ajit, about how he’s going to scrape together the money—2 lakhs—which he owes those merchants. Dolly suggests Khanna ask his wealthy brother Seth Sunderlal (Hari Shivdasani) for the money, but Khanna knows Sunderlal is a skinflint and won’t help.

The next logical (and chilling) solution is to get rid of Sunderlal. But Sunderlal has a beautiful daughter, Bina (Bina Rai), who’s heir to his millions. Ajit, therefore, is deputed to romance Bina and then kill her off. Why he should romance her in order to kill her beats me.
Khanna contrives to have Ajit meet Bina at her home, only to have Bina give Ajit the cold shoulder. She’s run into him on Marine Drive once, when he was racing along on his motorbike and ogling her.

Dolly’s advice to Ajit is that he should persevere. Next we know (and this is really next; there’s no wooing, no conversation, nothing), there’s a bunch of people singing and dancing on the beach, with Bina and Ajit on the outskirts amid some palms. In verse 1, Bina is glaring at Ajit, in verse 2, she’s smiling benignly at him. By the end of the song, they seem to be living in each other’s pockets.
But while Bina’s very much in love with Ajit, he’s treating it as part of his job. He definitely does not love her.

This, obviously, is not the way a self-respecting Hindi film should move, but (on the other hand) with so much action yet to happen, Marine Drive doesn’t have the time to make unrequited love bloom into a two-way affair. So it uses an old ploy: shove it under the carpet.
We switch to the desperate Johnny, who marries a rich woman (Tuntun), who’s promised to give him 25 grand if he weds her. After the wedding, Johhny discovers his wife’s been widowed six times and has six children. He also gets swindled by Karorimal and ends up having to sing—along with his wife and stepchildren—on the streets for a living. That’s it for Johnny in the film.

Getting back to the main story, Ajit’s fallen in love with Bina. He’s still not ready to admit it, but Dolly guesses and tells Khanna. When Ajit arrives, Khanna confronts him, and Ajit (trying to exonerate himself) vows that he (a) doesn’t love Bina (b) will shove her off a cliff at the first opportunity.
Khanna, arch villain that he is, records Ajit’s damning words for posterity. You never know when such confessions will come in use.

When the time comes, Bina is singing happily while balancing on a small rock at the edge of a cliff. Ajit kicks the rock from behind—sending her falling forward…and then grabs her, realising he can’t live without her. Ah, true love.

Ajit has a night of conflict with his own alter-ego, and his better self prevails. The next day, he tells Khanna he’s getting out of this. Khanna puts his goons on Ajit. He wants to kill Ajit, but Dolly dissuades him, saying that if Ajit dies suddenly, Bina will be suspicious (why? If Khanna & Co. are so very professional, can’t they make it look like an accident?)

Dolly assures Khanna that she’ll `attend to’ Ajit. Ajit has been tied to a chair, and Dolly’s idea of attending to him is to tell him she loves him and will do anything for him. She does this very unconvincingly, and Ajit is not convinced: he tells her to stop pestering him. [Aside: Don’t miss that black eye. One of the best I’ve seen in Hindi cinema, even though his eye is actually not even half-shut!]

Khanna, meanwhile, pushes Sunderlal off the terrace and to his death. Bina has a nervous breakdown, and the doctor advises a holiday. Khanna decides on Khandala, which has just the perfect atmosphere to get rid of Bina’s inconvenient presence…

What I liked about this film:
K N Singh. He has a good, villainously meaty role for once, and isn’t confined to a few frames.
One song: Raatein jagaake, sapne sajaake. Nice lyrics and good music.
Ajit and Bina Rai look good together in some scenes.

What I didn’t like:
Mohana. Her diction’s awful, her acting even worse. After having sat through the entire film, I still don’t know whether Dolly had an ulterior motive in insisting to Ajit that she loved him. Or was she really, truly besotted with him, and wanted to help him? Maybe Mohana knew.
Marine Drive gave me the impression of a film that everybody left off being interested in after a while. True, it totters right from the start, after the first half, it just leaves off trying. Here are some examples, all from the second half of the film:
The music (by N Dutta), uses large sections completely unaltered from Western classical music—I identified a long section from Wagner’s Ride of the Valkyries, and there’s more—without giving any credit. Had Dutta decided there was no point composing background music?
In one of the scenes, where a group of men alight from a car, I didn’t realise a trenchcoat-clad figure was K N Singh even though he was talking, because the voice used for the dubbing was someone else. Absolutely and unmistakably not K N Singh.
In Ajit’s anguished confrontation with his own alter-ego (in a mirror, as always), if you look closely, you can see a faint impression of a hand moving where the original Ajit’s hand would’ve been while he filmed for the mirror. Special effects did this in sleep mode, I think.

And the story/screenplay? The less said, the better. The last half hour has everything from unexplained electrical phenomena to a fight between a mongoose and a snake being used as a metaphor for the fight between good and evil.
They even reuse some shots from the first half of the film in the second half.

I need to see a good film.