The first time I heard about this film, it was in connection with the Hindi film Do Bigha Zameen (1953), the story of a poor family that tries desperately to cling on to the one thing that stands between it and utter destitution—a tiny plot of land. I’d heard that Do Bigha Zameen was based on Vittorio De Sica’s Ladri di Biciclette (The Bicycle Thieves).
Having finally seen this, I have to admit I find little similarity between the two films. True, as in Do Bigha Zameen, here too only one thing can save the family from starvation: in this case, a bicycle. And here too, it’s the father and his young son who set out together in a desperate attempt to save themselves. Other than that, the tone, the story and the general mood of the two films is very different. And much as I admire Bimal Roy, I have to admit: De Sica wins. Ladri di Biciclette is much more powerful and haunting than the relatively melodramatic Do Bigha Zameen. 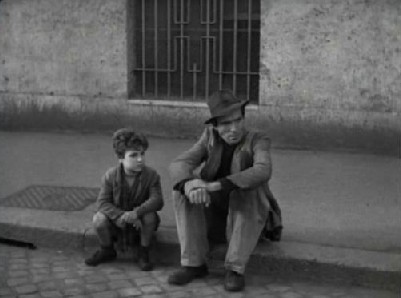 It’s Rome, a post-war Rome where the limp back to normalcy is especially painful for those at the bottom of the ladder—like Antonio Ricci (Lamberto Maggiorani), who’s out of a job and has had to pawn his bicycle in order to feed his family. Today, it seems, is Antonio’s lucky day. At the employment centre, his name is called out: he’s finally got a job pasting posters. There’s only one condition: he must have a bicycle. If he doesn’t have a bicycle, the job will go to a man who does.

Antonio hesitates, but seeing the job beginning to slip (the crowd of unemployed men all about him is already start to ring with cries of “I have a bicycle! Give me the job!”), he agrees. Yes, he’ll take the job.
He then hurries home to tell his wife Maria (Lianella Carell), lugging home two buckets of water from the pump, down a dusty street, up the stairs… and into their tiny, meagre home.
When she hears about her husband’s new job, Maria’s first question is a weary, frustrated one: where will they get the money to get his bicycle out of hock? 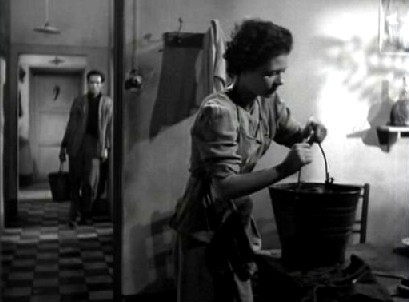 It is Maria herself who finds the answer to that: she strips their bed of sheets (“You can sleep without sheets, can’t you?”). Along with four more sheets—two of them brand new, all of them part of her dowry—she goes with Antonio to pawn off the sheets and get enough money to get the bicycle back.

Antonio goes to the office where he’s supposed to report, and Maria goes along with him, waiting outside to hear the news. When Antonio emerges (having received his uniform, along with instructions on where and when he should report on duty), he and Maria are so excited, they can hardly stop grinning at each other. Life’s finally looking up for the Riccis.

On the way home, Maria makes Antonio stop briefly at a grubby little building. She’ll only be a few minutes, she insists. When she’s gone a while, Antonio starts getting impatient and finally follows her upstairs, where he finds Maria in line to meet the Santona, a seer whom everybody seems to come to with their problems. Maria refuses to go until she’s paid the Santona 50 lire; the Santona, after all, had prophesied that Antonio would get a job—Maria must pay her; it’s duty. 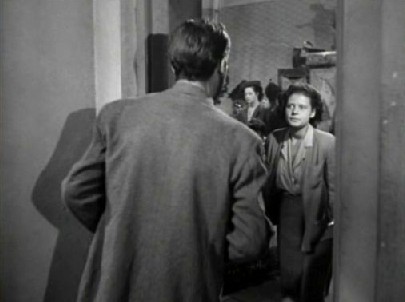 Antonio tells Maria off for acting like an illiterate peasant. Such superstition!
After an initial bit of huffiness, Maria relents: they’re in any case both too happy to quarrel. Antonio’s already beginning to work out how much he’ll be able to earn, along with overtime and family allowance.
The next morning, the excitement is, if anything, even more. The Riccis’ little son Bruno (Enzo Staiola) is as happy as his parents, and has been up since before dawn polishing the bicycle for his father to wheel out.

The two of them—Antonio and Bruno—grab their lunches, say goodbye to Maria and the baby, and then they’re off on the bicycle. Antonio drops Bruno off at the petrol pump where he works, and then goes to his workplace, to pick up his ladder, glue, posters, et al.
[Aside: The scene where Antonio drops Bruno off at the petrol pump is, for me, one of the many subtle indications of poverty in the film. When Bruno got off Antonio’s bicycle, I thought this was school—until the little boy went off into a shed and began taking out a funnel and pipe and whatnot. A little kid, who should have been in school, but instead, is working.]

Antonio is soon taught the basics of poster-pasting by a colleague, and then is left on his own. He progresses, slowly and a little clumsily, putting up posters of the voluptuous Rita Hayworth.

And as the sun rises higher in the sky, so Antonio’s attention, now focussed on completing his task, wanders from his bicycle, leaning against the wall—until a thief swerves, climbs on to the bicycle, and takes off, pedalling furiously, with Antonio in hot pursuit.
Antonio manages to leap onto the running-board of a passing taxi, as does a stranger, who helpfully yells to the taxi driver that he’s seen the thief ride the bicycle into a nearby tunnel. They go through, careening through the tunnel, to stop the cyclist racing ahead—only to find that it’s someone totally innocent, and the bicycle isn’t Antonio’s, anyway. Somewhere in the midst of it all, the ‘helpful’ stranger disappears. 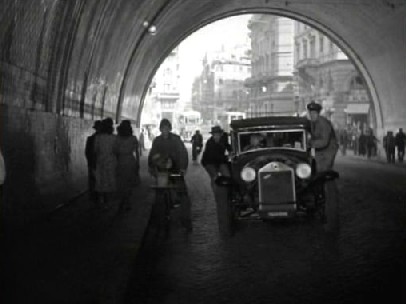 Antonio, distraught and frantic, rushes about trying to find his bicycle, but it’s useless: it’s long gone. He goes to the police station and files a complaint, but the police officer is blatantly discouraging. They don’t have the time and the staff to go searching for bicycles. The most Antonio can expect is that if he finds his bicycle—say, in a pawn shop—he’ll be able to prove it’s stolen.

Dejected, Antonio goes to the one man who may be able to help. His friend Baiocco (Gino Saltamerenda) seems to moonlight as the director and producer of a very small-time musical/theatre company when he isn’t a garbage collector. Baiocco is sympathetic, and (more to the point) helpful. He knows where all the stolen bicycles in Rome wash up: Piazza Vittorio. The next morning, he’ll take Antonio there, and they’ll look for the bicycle.

True to his word, Baiocco, along with Antonio and Bruno and two colleagues, sets out for the place Baiocco had spoken of. There are literally hundreds of bicycles here. Some are whole, but many have already been broken down into parts: frames, pumps, bells, tires. Baiocco confidently assures Antonio that they’ll split up, each of them looking for a separate part of Antonio’s stolen bicycle. When they’ve got all of them, it’ll be a simple case of assembling it.

But that’s easier said than done, and after a few false starts (and a mistaken accusation, which draws a lot of flak from bystanders), Antonio gives up, defeated. Baiocco must get back to work, but he asks one of his colleagues to take Antonio and Bruno to another possible place where they may be able to find the bicycle. Will they, after all, find it there? Or even if not the bicycle, a possible clue to where it may be? Or is it well and truly lost, gone forever?

And so begins a long, weary hunt for the source of their livelihood. Father and son trudge and dash across the city, through rain and sunshine, pushing their way through crowds, slinking through hostile neighbourhoods, pleading and threatening and coaxing for a clue. Their tempers fray, their moods swing between despondency and the mad extravagance of desperation (Antonio treats Bruno and himself to a big meal—and an entire bottle of wine—in a restaurant). There’s hope, there’s utter despair, there’s the possible relief of knowing that they have, after all, each other… but will that bicycle ever be found?

This is a harsh, sad film with all the realism of the hard times in which it was made. Not a film to enjoy, but a film to admire. Brilliant.

The fact that silences and actions speak so loud. There is so much about Ladri di Biciclette that is never spoken, simply indicated: a touch, a look, a quiver of a lip. I’d probably have been able to see this film—and understand much of it—even if there hadn’t been subtitles.

Bruno. On one of my earlier posts, a reader had posted a comment about films in which a secondary character actually is, in essence, the main character. Bruno is like that. Antonio is, obviously, the main character, the man desperate to retrieve his lost bicycle. But Bruno, caught in the maelstrom in which his father finds himself, is dragged along everywhere (even to a brothel) and is a key participant in much that happens—especially the climax. His character’s excellently drawn: a child, certainly, but in ways a child who’s had to grow up before his time. And the 7-year Enzo Staiola portrays Bruno perfectly. Interestingly, this was Staiola’s first film—De Sica (supposedly on the basis of Staiola’s walk—a delightfully slouchy one) picked him up off the streets of Rome for the role. He makes not just a very cute kid, but turns in what I’d rate as one of the best performances by a child actor that I’ve ever seen. 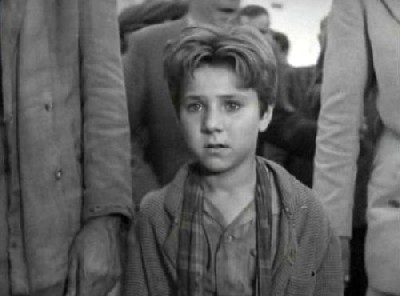 The cinematography. Beautiful, especially the stark sunlight-and-shadow views of Rome.

This is one of those films that merits a ‘nothing’ in this section. Yes, it is tragic, and possibly not a film I’ll see over and over again, but I can’t think of any flaws glaring enough to have spoilt the experience for me.

Ladri di Biciclette falls squarely into what I’d call great cinema. It’s a badge I’m very reluctant to assign to any film, and which—when applied by others to films I haven’t seen yet—tends to put me off; I dread films that are too deep and intense and abstract for me to understand. This one, however, mesmerised me with its simplicity, its poignancy, and its deep understanding of humanity—and of the desperation of poverty. But the poverty isn’t something that’s discussed or wept about at every turn; it shows in small details: in Bruno’s envious glance at the rich boy at the next table, eating mozzarella on bread; in Maria’s weary walk as she trudges up the stairs with buckets of water; and, most vividly, in the climax.