Years ago, when I was a child, Bronenosets Potyomkin (The Battleship Potemkin) was shown on television. I must have been about 10, perhaps 11—but no more than that. Five minutes into the film and I got bored of the grainy, jerky picture (this was an unrestored version) and the lack of dialogue. A silent film? And that too about a mutiny? Um, no.
For some 25 odd years, that remained my only memory of Bronenosets Potyomkin, even long after I’d discovered that it’s regarded as a sort of cult classic.
An omission, I realised, that needed correction. It was time to dust off Sergei Eisenstein’s magnum opus and see what it was really about.

The story of Bronenosets Potyomkin is very simple, almost ludicrously so. It’s set in 1905, aboard the Battleship Potemkin, where mutiny is brewing among the disgruntled sailors. Frequent thrashings from the officers, combined with inhuman working conditions, have worn morale to tatters, and some of the younger sailors are beginning to crack. The last straw is the rotten meat that is hung up on deck outside the kitchen, ready to be converted into soup. The sailors crowd around it, peering at the meat and complaining that it’s so crawling with maggots, it could walk overboard on its own.

The ship’s doctor, when called to check the meat, is dismissive: it’s not worms. All they need do is wash it with brine and it’ll be fine.
So the meat is used to make soup, but the sailors—to a man—refuse to touch it. The captain of the Potemkin, Commander Golikov (Vladimir Barsky) flies into a rage and summons all hands on deck. When the sailors stand by their decision to not eat the soup, Golikov has a bunch of sailors separated from the rest. A tarpaulin’s thrown over them, and a hurriedly-assembled firing squad is ordered to shoot them down.

At this point, one of the sailors, the firebrand Vakulinchuk (Aleksandr Antonov) decides enough’s enough. Vakulinchuk has been on the verge of rebellion all these days, and it now boils over into outright mutiny. He yells to the other sailors to rise up against their tyrannical officers, and soon the Potemkin is the scene of much fighting. The officers are heavily outnumbered, so it’s hardly a surprise that the sailors are soon able to gain control of the ship.

In the process, though, Vakulinchuk himself is killed.
His comrades, who’ve managed to bring the Potemkin into the harbour at Odessa, put Vakulinchuk’s body on a gun boat and bring him ashore. On the shore at Odessa, they erect a small tent to house Vakulinchuk’s body, lying peacefully on its back, clutching a burning candle…

…and that becomes an icon for the people of Odessa. It begins with a few passersby who come to the tent, curious to see what this is all about. But as the hours pass, the number of people coming becomes a crowd. They come to light more candles, to leave money, to sing the praises of this brave martyr who has given up his life for the poor and downtrodden. The steps of Odessa are crowded with the workers of the city, all of them thronging towards Vakulinchuk’s corpse as it lies in the tent. Gradually, too, Vakulinchuk becomes an inspiration for the workers of Odessa, with people urging each other on to use his example and rise against the tyranny of the ruling classes.

Happily for Vakulinchuk’s still-living colleagues, some of Vakulinchuk’s status as idol rubs off on them too. While they’re mourning for the martyr, the people of Odessa also find time to show their solidarity with the sailors. They go out in a small flotilla to the Potemkin, carrying with them provisions for the sailors aboard the battleship: suckling pigs, geese, chickens, eggs… the men never had it so good.

Suddenly, it’s all a big, joyful regatta. The sailors on the Potemkin wave to the crowds bringing them food. The people in the boats, handing up baskets of eggs or live chickens, are excited and happy; and the crowds on the steps of Odessa are close to delirious, waving madly and trying to get a better view of the Potemkin and its heroic sailors. Everybody is here: a legless veteran, women in bustles and carrying lacy parasols, workers, babies, children… Odessa has turned out in full force in support of the mutineers of the Potemkin. 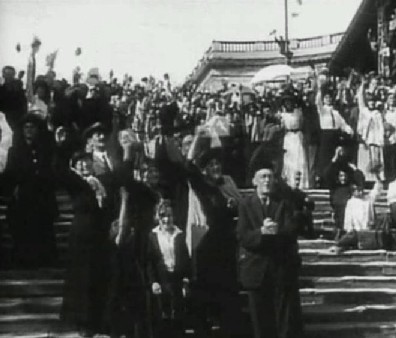 And that is when the most horrifying sequence of this story takes place. Because Czarist Russia will not allow this (at least not for the next 12 years); because Cossacks, both mounted and on foot, heavily armed and ruthless, are waiting at the top of the steps to quash all rebellion. The Cossacks open fire on the crowd, and what ensues is terrible. The crowd tries to flee, rushing frantically down the steps, pursued by the soldiers; but there are more waiting below, mounted and with drawn swords. Carnage follows. People fall and are trampled upon by their panicking comrades, women try desperately to save their children, and the steps of Odessa run red (black?) with blood.

Not very much happens after this: the Potemkin escapes the Czarist forces at Odessa by leaving the harbour in a hurry. It then runs into a naval squadron that’s in the vicinity and seems to be coming straight at them… but could it be that the squadron too has changed sides and is no longer loyal to the Czar? Or will the men of the Potemkin have to fight their final battle against an enemy too big to be conquered? 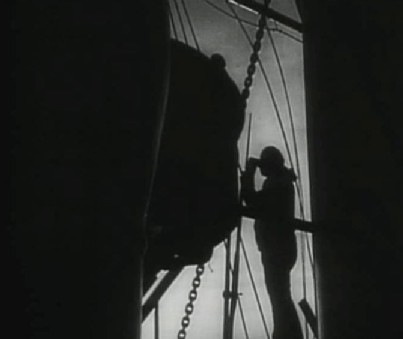 Not much, see? A very simple, short story that could well have been compressed into perhaps half an hour (as it is, Bronenosets Potyomkin is only about 75 minutes long). Commendably, though, Eisenstein doesn’t let the film drag: he uses the time to build it up, in small details that add to the atmosphere. Shortly after the sailors realise that the meat on board is tainted, for instance, there’s a shot of two sailors washing dishes. It’s interspersed with shots of the soup being cooked, bubbling as it’s stirred… and somewhere nearby, the two men scrub plates, rinse plates, wipe plates—until one of them, the younger of the two, notices the letters painted on the rim of the plate: Give us this day our daily bread. 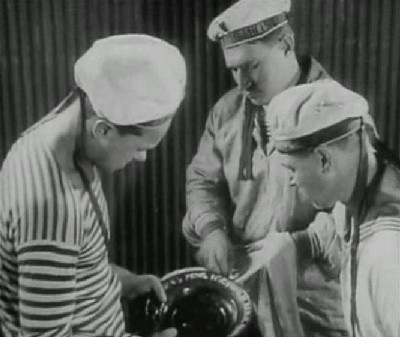 And that is what throws the sailor over the brink: that sudden realisation that in this skewed world of haves and have-nots, he and his colleagues are the ones who can’t even hope for bread. He smashes the plate in a mad fit of anger and Eisenstein gives his audience another glimpse of the desperation that prompted the revolution.

Or another detail: when Commander Gokilov assembles the firing squad, the men line up, guns at the ready—but one man looks down for a moment, indecision written all across his face. As if he’s wondering whether he’s doing right by obeying Gokilov. 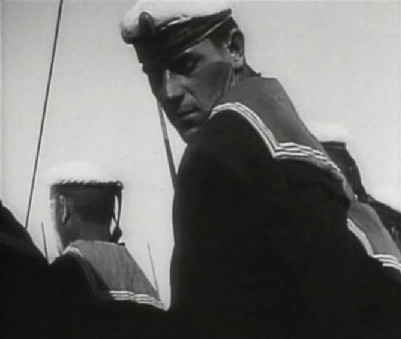 Or in that memorable scene of the massacre on the Odessa steps: a woman (Prokopenko) and child, standing happily on the steps and watching the gaiety aboard the Potemkin, find themselves caught in the stampede. They run down the steps, hand in hand—but the jostling crowd separates mother from son, and the child is gunned down. What follows is a series of quick back-and-forth frames: the mother realising her child’s missing; the child, blood flowing, falling on the steps; the frantic mother rushing about looking for him; people stampeding, stepping on the child as they run by… and finally, the mother, gone mad with grief, lifting her dead child in her arms and approaching the Cossacks, as if asking them to give back her child to them.

And another haunting scene from the same sequence: a young mother (Beatrice Vitoldi, later to be the USSR’s ambassador to Italy), with her baby in a pram. This mother manages to find what seems like a safe spot near the edge of the steps, but to make sure that her baby remains safe, she positions herself in front of the pram—and is hit by a bullet. We see her clutching her waist (there’s a long, lingering shot of the ornate buckle on her belt, as blood starts flowing over it), and then she keels over backward, hitting the pram and sending it hurtling helplessly down the steps, baby and all.

This is what Bronenosets Potyomkin is for me: details. Eisenstein zooms in and out, going from the larger, panoramic view (the battleship, the Odessa steps) to sudden extreme close-ups (the sailor, the mother, the child). The overall effect is unforgettable.

Bronenosets Potyomkin is considered pathbreaking as far as technical aspects go: the quick editing, for instance, was an innovation that Eisenstein introduced to the world of cinema with this film. I am unlikely to know technical brilliance if it hit me on the head: but I can see the effect of that brilliance, and I can appreciate it.

All said and done, though, I doubt if I’ll see the entire film again. For someone who’s studying cinema, or learning film-making, it would almost certainly merit multiple viewings. For someone like me, who simply likes to see good films, this may not come up on the agenda again. Except for the sequence on the Odessa steps—that is in a class by itself.

The sequence on the steps of Odessa. Several film critics have called this among the best scenes in cinema, and I’m inclined to agree. It’s stupendous.

The propaganda. It doesn’t pervade the film, but there are a couple of instances where it’s painfully obvious. For example, in the (mercifully brief) appearance of the Potemkin’s chaplain, a priest who comes nodding his head approvingly when the mutinying sailors are facing the firing squad. Later, when Vakulinchuk and his men have taken over the ship and killed the officers, the camera dwells lovingly (and gloatingly) on the corpse of the priest, his ornate crucifix partly buried in the floorboards. A little cheesy.