Well, this might just furnish some sort of answer to that question. Plummer stars in Triple Cross as a war-era safe breaker who offers his services to the Nazis as a spy in Britain. It’s not a frightfully demanding role, but it offers a glimpse of what Plummer was capable of. And I can understand why he might have thought of his role as Georg von Trapp as a little too much of a cakewalk.

Eddie Chapman (Christopher Plummer), when he’s not jumping into bed with any woman who gets his hormones racing, is busy cracking safes and extracting diamonds. The police are desperate to catch him. The newspapers are speculating that the ‘Gelignite Gang’ (the business card Eddie leaves behind at each site of a robbery) use sophisticated explosives to blow up safes. In truth, Eddie uses olive oil and chewing gum as part of his equipment, and an accomplice with a malfunctioning car that goes ‘Boom!’ every few seconds, helps hide the ‘Boom!’ of the exploding safe.

Very simple. And very effective. So effective that Eddie is soon able to afford a holiday—in sunny Jersey. And while he’s enjoying himself with the local female population, the police turn up and finally arrest him. Eddie is imprisoned on Jersey itself, and is there when the Nazis invade Jersey.

A few days later, two visitors arrive at the prison to meet Eddie Chapman. These are Countess Helga Lindstrom (Romy Schneider) and Colonel Steinhager (Gert Fröbe), and after questioning Eddie for a bit, they realize that he’s offering them a deal: he will become a spy for the Nazis in England. An Englishman, a safe cracker, and traitorous. What more can they want? But—in exchange for money. Good, hard currency.

The countess and the colonel give Eddie no indication of whether they will accept his offer. They leave, and soon after, Eddie finds himself transferred to a prison in France. A brief interlocution with a fellow prisoner convinces Eddie that the Germans are keeping a strict watch on him—the fellow prisoner turns out to be a Nazi masquerading as a Maltese waiter. Eddie is on to him in a jiffy, but beyond letting the German know that Eddie knows—and that the man should stay out of Eddie’s way—Eddie doesn’t do much.

Eddie settles into prison life soon, even finding himself a lady friend called Paulette (Claudine Auger) in the women’s block. With his characteristic raging hormones, Eddie one night picks the lock on his cell door and sneaks out (unaware of the fact that the pseudo Maltese is watching him). Eddie picks locks all along the way until he gets to Paulette and one night of passion.
The next morning, the prison authorities (informed by the ‘Maltese’) barge in, arrest both Paulette and Eddie… 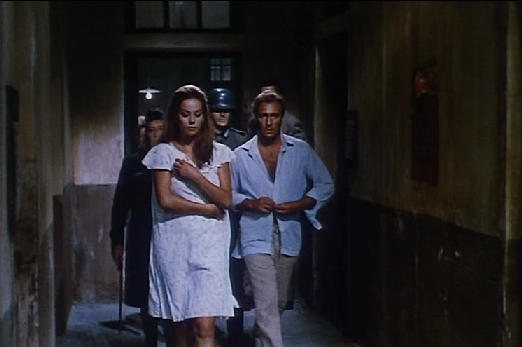 …and sentence Eddie to face the firing squad. (Bit drastic, no? But wait and see).
It turns out to be all a ruse; the countess and Steinhager come to fetch Eddie away in a car, while news of his ‘execution’ is published in the newspapers and Eddie Chapman is officially declared dead. Paulette is released, because the Germans suspect that she’s part of the French Resistance; now that she’s been let go, the Nazis are hoping she’ll go back to the Resistance and will spread the word that Eddie Chapman is dead.

Eddie is now introduced to the man who will be his boss: Baron von Grunen (Yul Brynner). Von Grunen draws up a contract whereby the Nazis will pay Eddie Chapman a hefty sum for his services. Eddie will be trained, will become part of the German army, and will then be sent back into England as a spy. Eddie haggles a bit over the amount he will be paid; proves his competence with a gun… 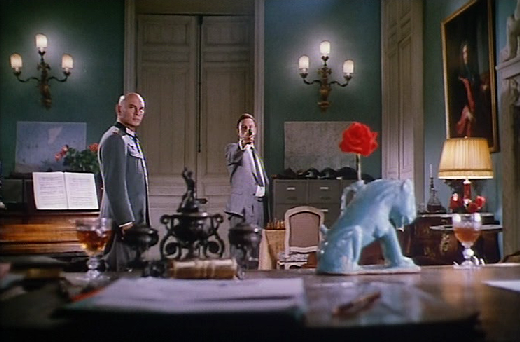 …and is told that he will from now on be known as Fritz Graumann, Private Second Class in the German army.
Eddie’s training begins. He learns everything—from codes and using the radio, to how to make and set and improvise explosives, to hand-to-hand combat. 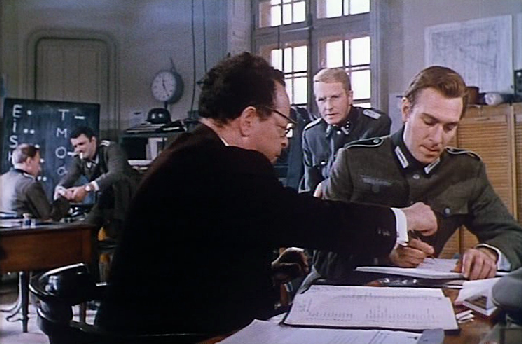 When they consider him ready, von Grunen and company send Eddie on a little test mission to check whether he’s really loyal to them, or this is all a trick. Though they find themselves doubting Eddie’s loyalty briefly, they eventually realize that all is well; Eddie reports back, is welcomed back, and is given the thumbs up. They trust him completely.

Time now for the real mission. Time for Eddie to be sent back to his motherland as a spy. Before he’s taken up into the aircraft that will parachute him into England, Eddie sneaks up into the radio room and copies down some codes. Then he’s off, into the plane and flying across the Channel and into England, ready to carry out a mission against his own country—a mission to blow up the Vickers factory. 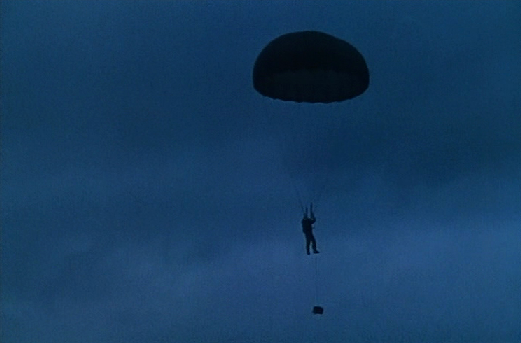 And the first thing Eddie Chapman does when he lands in England is to look for a phone so that he can talk to the police. Three days later, in Whitehall, he manages to accomplish what he had come here for: for a given sum of money (a hefty sum), Eddie Chapman will go back to the Germans—but as an Allied spy. First, of course, so that the Germans will continue to trust Eddie, an elaborate plan is made to have the Vickers factory ‘blow up’.

And then the war goes on, with Germany’s top foreign agent actually working for the British all the while. But how long will it last? Will Eddie be able to hoodwink the Nazis till the war finally ends? Will he get caught?

If you like secret agent films and quick twists of plot, Triple Cross is for you. In fact, if you like James Bond, you should see this one—Eddie Chapman is pretty much a sort of proto-Bond, what with his women and his spying. And I’m not sure it’s coincidental, either; Terence Young, who directed early Bond films like Dr No and From Russia With Love, was also the director of Triple Cross.

And the most interesting bit? Eddie Chapman was a real man, who was known as Zigzag during World War II. He was a one-time criminal who was in jail in Jersey when the Nazis invaded. Like the Christopher Plummer character, he did offer his services as a spy for the Germans, was trained, and landed back in England, where he turned himself over to the police and offered to become a double agent. In fact, he (as ‘Fritz Graumann’) became one of Nazi Germany’s most trusted secret agents; they even bestowed an Iron Cross on him.

The director of Triple Cross, Terence Young, had known Eddie Chapman before the war. Chapman himself didn’t much care for the film—its connection to fact was tenuous—but as a spy film, it’s slick enough to please most enthusiasts of the genre.

Christopher Plummer. All right, this still isn’t as memorable a performance as Plummer’s performance in The Royal Hunt of the Sun or The Fall of the Roman Empire (the latter especially, ever since I’ve seen it, has sent my opinion of Plummer’s acting abilities shooting up) but he’s still good, smart and suave.

The screenplay, by René Hardy and William Marchant. Stylish, fast-paced, with an adrenalin-boosting thread of twists and turns and unexpected happenings. Neat.

More detail in some parts of the film would have been welcome. For instance, when Eddie Chapman carries out his first mission in England: how did they do that? I could see the result, but not how that was done… I would have liked an explanation, even if brief.

But that was minor. I liked this film a lot, even despite that little niggle.