Shahjahan’s father and predecessor, Jahangir, was as fond of beauty as his more aesthetic son—but in a different way. Jahangir was a naturalist, the Mughal emperor who could almost be considered an amateur zoologist and botanist. His autobiography, the Tuzuk-i-Jahangiri, contains vivid and detailed accounts of Jahangir’s observations of the birds and animals in his menagerie—for instance, sarus cranes, tigers, and even a humble cat!

Jahangir, in fact, was so interested in plants and animals that he stationed an agent at Goa, with the express purpose of receiving all ships (especially those of the Portuguese) that docked at the port. The agent was supposed to keep an eye out for all interesting and exotic flora and fauna that arrived, buy them at whatever cost, and have them sent to the emperor so that Jahangir could observe them for himself. This zebra from Abyssinia, for example: 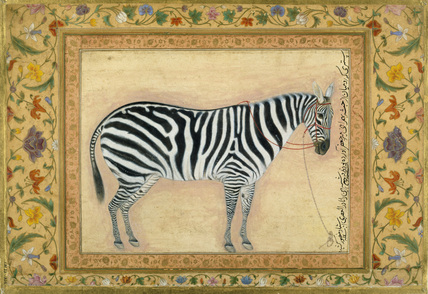 Painting of an Abyssinian zebra, by Ustad Mansur

This is how one of the most anatomically accurate paintings of the dodo (much more accurate than was being painted by contemporary European artists) came to be created by Jahangir’s most famous painter of wildlife, Ustad Mansur. Mansur, in fact, is believed to be the first painter anywhere to have painted the dodo (he painted it circa 1625 CE; the dodo had been discovered only about 25 years earlier).

One of the earliest paintings of a dodo, by Ustad Mansur. Circa 1625 CE.

Mansur was also a fine painter of flora. Many of his paintings of flowers have, unfortunately been lost over the centuries. One that still exists is a painting of a red tulip:

This painting, of a red Kashmiri tulip, is probably the Tulipa lanata regel – which should properly be called Tulipa lanata mansur!

Various sources have identified this as the Tulipa lanata regel, named for the German botanist Eduard August von Regel (1815-92). Current-day art historian Ebba Koch, who is an authority on Mughal art and architecture, mentioned in a lecture that since it is common to name plants for the botanist who discovered them (or first documented them), Tulipa lanata regel should correctly be named Tulipa lanata mansur!

5 thoughts on “Jahangir, Ustad Mansur and the Art of Fauna and Flora”