[This is a version of an article I wrote for the June 2013 issue of National Geographic Traveller India].

It is a sunny summer day, and my husband and I are in Strasbourg’s Palais Rohan.

After the Nôtre Dame Cathedral, this is Strasbourg’s most important tourist attraction, an 18th century palace in the form of a hollow square. Carved ribbons and flowers decorate its buff stone walls. Sloping green roofs overlook the central courtyard. Beyond the walls flows the River Ill.

The Palais Rohan is known not just because Marie Antoinette once slept here (in a crimson-draped four-poster), but because it is home to three fascinating museums: one each for the fine arts, the decorative arts, and archaeology.

We have been exploring the museums since after breakfast. We have admired everything from Botticellis and Corots to Flemish tapestries and Ming vases. Our tummies are telling us it’s lunchtime. Time to see one last gallery, and then head for the cathedral square, where we’ve discovered a café that serves Alsatian specialties. We’re thinking loving thoughts of poulet au Reisling and tarte à l’oignon when we step into a gallery in the Museum of Decorative Arts. This room is devoted to the porcelain manufactured by Strasbourg’s 18th century Hannong family.

The Hannongs did not merely make dinner services and tea cups: they were more adventurous. In the display cases here are porcelain clocks and figures—ladies, musicians, soldiers. And a display, eye-poppingly quirky, of porcelain doodahs that reflect Strasbourg’s long obsession with food. How many tables, we wonder, were laid with such crockery? A plate that looks as if it’s vine leaves stitched together? A lidded bowl that’s a perfect imitation of a cabbage? Or one like a doe’s head? Or the many ducks and geese, grey, white, and brown-feathered, that look as if they’ve just waddled out of the Ill? 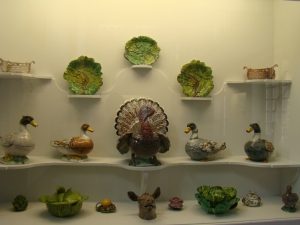 “We must find Rue de la Mésange,” I whisper to my husband. He nods back. Yes, we must.

There is a connection between the Hannong porcelain poultry and Rue de la Mésange. When we were planning our trip to Alsace, my husband remembered a colleague who hails from Strasbourg. “We’ll ask Hervé for recommendations,” he’d said. Hervé agreed that the cathedral, Palais Rohan, and the canal-side Petite France area, with its picturesque half-timbered houses, are Strasbourg’s highlights. “And for foie gras, you must go to Rue de la Mésange,” he wrote. “To Edouard Artzner. They are the best.” 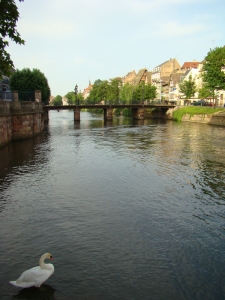 Not that the people of Strasbourg, or even Alsace (of which it is the capital) can be credited with discovering foie gras. That honour goes to the ancient Egyptians, who, 5,000 years ago, noticed that geese along the Nile periodically gorged themselves in preparation for long migration flights—and that the flesh (and presumably livers) of these fowl were especially delectable. It didn’t take much to realise that the process could be speeded up by artificially fattening geese, by force-feeding them.

From this, in fact, arises the controversy that surrounds foie gras, its production, and consumption. How ethical is something produced by pushing food down a bird’s gullet? The debate has made several countries ban the production or import (or both) of foie gras. It has also encouraged more conscientious producers to look for means of fattening livers with minimal distress to the birds.

In Spain, for instance, a producer has resorted to free-range production, where fowl gorge themselves (as they would naturally do, before migration)—and are caught before they can fly off. In France, where law allows the term ‘foie gras’ to be applied only to artificially fattened livers, gavage (force-feeding) remains an essential part of the process—but even here, more humane measures (like flexible rubber tubes instead of metal ones for force-feeding) are being adopted. On many farms, birds roam free initially and are penned only in the last few weeks, when the gavage takes place.

But, back to the history of fattening livers, which the Romans learned from the Egyptians.

The Romans, we discover on our tour of Strasbourg, had occupied this part of the world too, starting sometime around 12 BC. They called Strasbourg Argentum, and they left behind numerous reminders of their presence. One of these, in the Musée Archéologique at the Palais Rohan, is a bronze bust of Bacchus, the Roman god of wine—and, by extension, of the love of good (not necessarily wise) things. Bacchus, who would have smiled down on countless banquets featuring Roman haute cuisine: truffles, stuffed udders, capon’s testicles—and fattened goose livers. The Romans fed geese boiled barley, or, more famously, dried figs. When the geese were sufficiently fat, they were killed by being force-fed honeyed wine. The resultant delicacy was iecur ficatum, (‘fig-stuffed liver’).

When the Roman Empire collapsed, iecur ficatum disappeared too, but re-emerged in Palestine, where it had probably been introduced during Roman occupation. For the Jews of Palestine, this was a welcome addition to their diet: tasty, yet conforming to the restrictions of their faith.

By the Middle Ages, the Jews were migrating west, and taking with them their food habits.  Ashkenazi Jews, for example, settled along the Rhine, from Rhineland to Alsace—and brought with them, to Alsace, the concept of foie gras.

One afternoon, my husband and I sit at a café in the cathedral square. The spire towers so high, it’s impossible to stand in the square and get the entire church, steeple and all, into one photograph. We’ve been inside the cathedral and have marvelled at its magnificently carved stone. We’ve even been into the neighbouring Musée de L’œuvre Nôtre Dame, which houses—along with carving originally in the cathedral—medieval Jewish tombstones from a city cemetery. 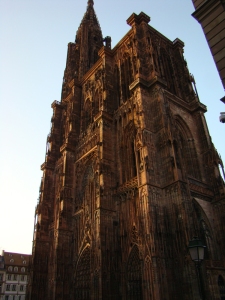 Now we’re fortifying ourselves while we figure out how to get to Rue de la Mésange. With our coffees, we’re having kougelhopf. Studded with raisins and almonds, baked in a traditional ripple-ringed kougelhopf mould, this is the quintessential Alsatian cake—and it’s Jewish in origin.  At the souvenir shops scattered across the square, little kougelhopf moulds, plain and practical, or painted and ornamental, sell like hot cakes. 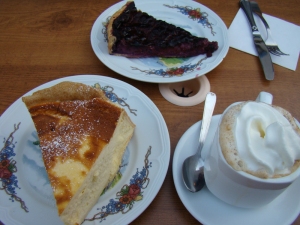 Less than fifty yards from where we sit is the cathedral’s massive arched stone portal, carved so profusely, it looks like stone lace. Pilasters, arched windows, and dozens of figures decorate the arch. On the left are the statues of two women. Ecclesia, representing Christianity, triumphantly bears a crucifix and chalice. Synagoga, representing Judaism, is bent, blindfolded, beaten.

This statue of Synagoga is from the 13th century. Judaism is much better regarded now in Strasbourg, which boasts of the largest Jewish population in any French city. The main synagogue stands on the edge of the Parc des Contades. Our stay in Strasbourg is too brief, our itinerary too packed to permit a trip there, but the name registers—because the Marquis de Contades (Louis XVI’s emissary to Strasbourg in the 1780s) has a link with foie gras. On the eve of a banquet he was hosting, de Contades ordered his chef, Jean-Pierre Clause, to create a dish worthy of the elite who were invited.

Clause supposedly spent the night working in his kitchen, and created a dish of goose liver baked in pastry. He called it pâté de Contades. When it was brought to the banquet table, the French gastronome Jean-Anthelme Brillat-Savarin, who was present, described the occasion thus in his book, The Physiology of Taste: “… And when the loaded plates had been handed around, I saw successively imprinted on every face the glow of desire, the ecstasy of enjoyment, and the perfect calm of utter bliss.”

Foie gras had been introduced to the epicure. 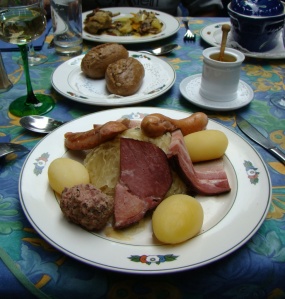 How many cities have streets named after cooks? Strasbourg does. Rue Jean-Pierre Clause, bent like an elbow, lies in the north-western part of Strasbourg. It is nowhere close to where we are, but Rue de la Mésange is.

We go there the day before we’re to leave Strasbourg. A tram line runs down the centre of the street. The pavement is broad, the buildings predominantly 19th century. There are baroque façades, dun-coloured stone carved into scrolls, flowers and human faces above arched glass windows. The shops bear some familiar names. Gucci, Louis Vuitton, the Body Shop, Hermès.

And Edouard Artzner, its name spelled out in large metallic letters. Maison fondée en 1803, reads the sign. Established in 1803. 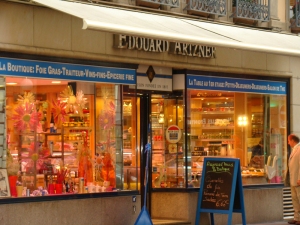 On the outside, the shop looks less like a foie gras boutique and more like a toddlers’ birthday party. From across the street, the window displays seem to consist largely of huge paper flowers, yellow, pink and white. White cardboard geese are dotted about the windows, and plastic flowerpots, red and orange, hold more paper flowers.

A few steps closer, and things spring into focus. The flowers and geese are incidental. Beyond them are shelves of foie gras. Fresh, semi-preserved, preserved. In dauntingly expensive blocks, and in small glass jars, terrines, confits. There is caviar, smoked salmon, cheeses, cold meats, wines. On the pavement outside, listed on a small blackboard, is the day’s menu for the in-house restaurant: quenelles de foie, with pommes de terre sautée, for €6.60.

When the confectioner and caterer Philippe-Edouard Artzner opened this shop in 1803, there were already two other competitors in town. But Artzner, who innovated and created interesting recipes, soon made his mark. In about 1850, his son and successor, Edouard Artzner, gave the shop its key product: foie gras, slow-cooked in a terracotta terrine and covered with melted goose fat, which increased its shelf life to a couple of weeks. 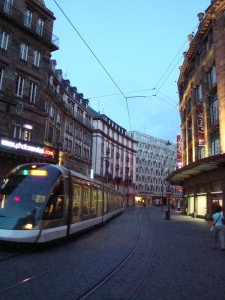 We step in and look around. The variety is mind-boggling. After much thinking—and a discreet glance at our wallets—we settle for a small jar of preserved foie gras (“for travelling?” asks the saleswoman, guessing we’re buying it for back home). We also buy a couple of bottles of Gewürztraminer, the white wine Alsace is known for.

A few weeks later, back in Delhi, we open the jar of foie gras. Not by ourselves; no. This is to be shared, to be savoured with others who can appreciate it. We will have a main course later, but the foie gras, opened so reverently, is the appetiser. We have a baguette on the side, sliced thin and lightly toasted. A bottle of the Gewürztraminer has been uncorked.

The foie gras isn’t a paste; it’s pieces of rich, velvety liver. The flavour is unforgettable, the texture incredible. With the spicy freshness of the Gewürztraminer to balance the buttery foie gras, this is a meal to remember.

All conversation ceases. Imprinted on every face is the glow of desire, the ecstasy of enjoyment, and the perfect calm of utter bliss.

Brillat-Savarin couldn’t have put it better.