We’d heard, sometime late in 2013, that Benihana—the US-based Japanese restaurant chain—was going to be opening an outlet at Epicuria. Since my husband and I are both very fond of Japanese food, this was something to look forward to. We saw, every weekend when we visited Epicuria, the progress being made: the interiors being finished, the furniture being brought in, and finally, the restaurant being opened to the public in the winter of 2013-14.

As it was, we ended up eventually visiting Benihana for lunch only in late spring 2014, by which time we’d hoped they’d have settled in and got their act together—previous experience has shown us that few restaurants, even when they’re part of well-established chains—can manage to do everything just perfect from Day 1.

We arrived at Benihana for lunch one Sunday with my sister and her husband. My brother-in-law had booked a table, but when we arrived, we discovered that we were the only diners in the entire place. (Later, two other tables were occupied too, but Benihana, it seems, has a fairly sparse clientele as of now).

The restaurant, with a black vintage car parked in the lobby just as you enter, is decorated in stylish shades of black and grey, with highlights (the signage, some interesting bead-like curtains) in crimson. Each table has seating on three sides: the fourth side is where the chef stands to prepare your main meal for you. Benihana’s USP, you see, is its teppanyaki, and the very fact that the chef, besides cooking food for you, makes a performance out of it. The teppanyaki griddle—large, rectangular, and with the heat pouring off it—is right there at each table.

As soon as we were seated, food and beverage menus were handed over. Since none of us are great drinkers, we skipped the wine list (which also has some sake, besides other wines and spirits, cocktails and mocktails) and ordered two fresh lime sodas (for my sister and her husband) and two green teas (my husband and I). I’d have loved a genmaicha (that gloriously woodsy-nutty green tea that derives its flavour from roasted rice added to the tealeaves), but Benihana didn’t seem to offer anything but a generic  green tea. On the plus side, our drinks were served quickly. On the flip side, the tea, at least, was flavourless and lacklustre.

The food menu at Benihana isn’t a vast one. Besides the hot appetisers, the sushi and sashimi, there are fixed lunch specials (dinner specials are separate). Our decision was made within minutes: for our first course, we’d share a ‘spicy dynamite edamame’ (steamed edamame, sprinkled with salt and sesame oil) and a Benihana tempura roll (stuffed with prawn, salmon, tuna and cucumber). For our mains, we decided we’d make life easier for the chef by ordering the same thing—the hibachi lamb and chicken.

The edamame—whole pods, lightly steamed and now at room temperature—were served, lightly dusted with a barely-spicy powder. On the side came a spicy mayonnaise as a dipping sauce. Not bad, but if somebody ordered this hoping for the ‘dynamite’ promised in the menu, they’d have been disappointed. My husband and I later agreed that we’d also have liked it more if the edamame had been removed from their pods, sparing us the bother of doing so.

The ‘dynamite’ edamame at Benihana – not too spicy at all.

I liked the Benihana tempura roll more than the edamame: inside the nori wrapping lined with sushi rice, the stuffing was of prawn, tuna, salmon and cucumber, the thin, crisp tempura batter coating the nori sides of the roll, rather than (as is more usual) the prawn having been batter-fried and used as a stuffing. Besides the little dab of wasabi the waiter placed on our plates—along with pickled ginger, and the little pool of soya sauce in a tiny individual saucer—there were sauces (including what tasted much like a Thai sweet chilli dipping sauce) on the sushi roll itself. Perhaps too many sauces, but this, by and large, was a dish I liked. The sushi, however, was cut a tad too thin and was difficult to handle with chopsticks. 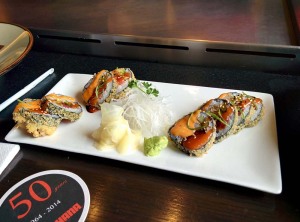 The Benihana tempura roll, filled with salmon, tuna and prawn.

Next up, as a prelude to the mains, was salad: individual bowls of ice berg lettuce, a quartered tomato and a shred or two of purple cabbage, topped off with a creamy dressing that I couldn’t identify. This was a bad precursor to any meal (iceberg by itself isn’t an inspiring leaf, and combined with the rest—that salad, I think, should really have been left out of the experience).

Two of the most disappointing things we consumed: a tasteless green tea and a frightful salad.

As we finished our salads, our waiter asked us if we were ready for our mains, and when we agreed, he summoned our chef. Chef Jonathon was a sweet, friendly sort who wheeled in his trolley, crosschecked our order, and started off by setting out individual bowls of sauces for us: a ginger sauce for the vegetables, a mustard sauce for the meats. Then, with a toss and flourish of fork and knife-cum-spatula, he began his performance.

Oil was drizzled onto the hot grill in the form of a large smiley, then swiftly spread and vegetables—zucchini and onions—scattered over. The chef chopped, seasoned, and worked, joking with us now and then, and within a few minutes, dished up into each of our plates, the cooked vegetables.

Part of the hibachi main course: vegetables, straight off the griddle.

These were good, and especially so with the ginger sauce. While we ate, our waiter brought us individual bowls of cooked rice, and our chef got out fillets of lamb and chicken and began cooking those. First up was the lamb, cubed and beautifully cooked (we were asked how we wanted it, and all of us opted for well-done) with minced garlic, butter, a sprinkle of sesame seeds, and a barely-there sauce which included soya sauce and possibly mirin. The chicken came next, with a lovely sweetish sauce that may have had honey in it (we were too intent on enjoying the lamb to actually notice what went into the chicken).

While Benihana does have a few desserts, most are not Oriental ones (the only item in the dessert menu that sounded interesting to me was the green tea crème brulée). None of us was terribly keen on having dessert at Benihana, so we ended our meal with the main course.  The bill, without taxes or service charges, would have been about 1,500 per person. Not cheap by any stretch of imagination.

For me, Benihana is probably going to be a one-time experience. While the food wasn’t bad (the main course, especially, was very nice), it wasn’t the sort of thing you rave about to people for months after. The edamame was forgettable; I’ve had better sushi; and the salad was, to put it mildly, an utter disappointment. Besides, I am one of those people who like to eat meat with vegetables: I don’t like having to eat vegetables separately and then sit around waiting for my meat to be dished up. I’d have been much happier if the hibachi chicken and lamb had been cooked along with the veggies.

My recommendation? If you’re keen on the performance—on seeing a good bit of jugglery and some showmanship combined with culinary skills—this could be worth a visit. But don’t go expecting mind-blowing food. And remember, this isn’t going to be easy on the wallet.