4 Seasons hadn’t been on our list of places we wanted to eat at in Hyderabad, but we’d come to this little complex of eateries, only to find that the place we’d been looking for—Pista House, which calls itself the best haleem restaurant in Hyderabad—was shut, and would open only after about a month or so. A quick phone call to a Hyderabadi colleague, and my husband was told that 4 Seasons was a good place too, so we walked across to it.

4 Seasons sprawls over two floors. The section on the ground floor, where we first tried to enter, turned out to be off-limits. “The family section is upstairs,” said the waiter who acted as host. Family, of course, implying not just children and similar jing-bang, but even just one lady with a man. The implication being that this section, with only men in it, isn’t exactly conducive to the gentler sex (I wonder why, but from the way the male diners were staring at me as we walked away, I didn’t really mind).

A view of the ‘family’ section at 4 Seasons.

The first floor—the family section—is a clean, no frills restaurant, with white tables and chairs and dark brown runners.

The menu is (as the restaurant’s name suggests) multicuisine, with everything on it from Lebanese to Chinese to North Indian to the run-of-the-mill sandwiches, grills, and so on. We weren’t interested in any of that, but 4 Seasons, fortunately, also offers Hyderabadi biryani. We therefore ordered a mutton biryani (the captain who took our order seemed surprised that we ordered just one, and assured us that one portion served a single person, so we should really be ordering two portions). We did so, along with a green salad. We’d also been keen on ordering a raita to go with the biryani, but our order-taker told us that the biryani was served with raita and a mirchi ka salan on the side, so we merely ordered a fresh lime soda each to drink, and sat back to wait for our food to arrive. 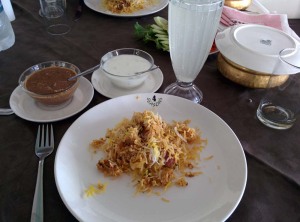 The fresh lime soda—served in sundae glasses, but nice and refreshing—arrived soon after, though the meal itself took about 10 minutes or so to come. This was when we received shock: far from being just sufficient for one person, each portion of biryani was a huge heap of white-and-yellow fluffy rice hiding spiced mutton. Just one look, and we knew we’d probably not be able to finish even one portion between ourselves. We therefore informed the order-taker, who agreed to cancel one biryani and sent it back to the kitchen.

That hiccup aside, this was a pleasant meal. The biryani, while well spiced, was more along the lines of fragrant-spicy rather than hot-spicy: just my type. The mirchi ka salan, fat green chillies cooked in a thick green sauce and served in a little bowl on the side, added the right amount of zing and verve to the meal without being oppressively hot either, and the raita—just whisked yoghurt mixed with salt and with a garnish of fresh green coriander—provided a pleasant contrast.

Lunch at 4 Seasons: Biryani, the works, and salad.

We did want to try some of Hyderabad’s famous desserts while we were in the city, and 4 Seasons offered two of them: khubaani ka meetha (stewed dried apricots, puréed and served with cream), and double ka meetha.  Khubaani ka meetha is something we’ve both had earlier (in a Hyderabadi restaurant—The Golconda Bowl—in Delhi), ad found far too sweet for our liking. Both of us therefore settled for the double ka meetha. This is a Hyderabadi version of the North Indian shahi tukra, sliced white bread which has been fried and soaked in syrup, then served with rabri (milk cooked till it’s thick and creamy) and chopped nuts. 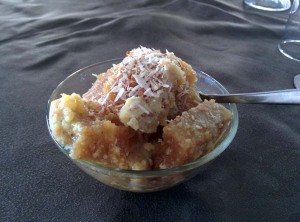 4 Seasons’s double ka meetha was rather too sweet for our liking. The bread was sliced thick, so the syrup hadn’t soaked through to the centre; and the rabri was in short supply.

We paid Rs 848, inclusive of taxes, for our meal. This is almost certainly not the best Hyderabadi meal one could have in the city, but if you’re looking for a somewhat upmarket restaurant that’s neat and clean and offers a variety of cuisines, you could do worse.