My husband and I end up visiting Select CityWalk Mall every other week or so, invariably combining shopping with lunch, followed by coffee and cake, mostly at either The Coffee Bean and Tea Leaf or Starbucks. When we saw that Krispy Kreme had opened a store here, we told ourselves we’d stop by someday to try out their doughnuts—but didn’t get around to it for the next few months.

A view of the display counter at Krispy Kreme.

When we finally did, it was on a sunny spring day. We’d eaten a light lunch at Pita Pit (just opposite Krispy Kreme), and had left ourselves enough room to have dessert at Krispy Kreme. Dessert and drink, since they do offer various coffees (both hot and cold), as well as fruit-flavoured drinks, tea, etc. And loads and loads of doughnuts, all the way from plain glazed to custard-filled ones topped with chocolate or coffee or Oreo cookies, to fruity ones.

Krispy Kreme has, in contrast to Pita Pit, lots of seating. Opposite the long counter (which acts both as the display as well as the order and service counter), there’s a series of two-seater tables. The L-shaped restaurant space has more tables, including ones with comfy sofas, around the other side, overlooking the front plaza of the mall. There wasn’t much of a crowd (most people seem to come by just to get a box of doughnuts to take away), so we got a good table next to the window, with the sunshine pouring in. 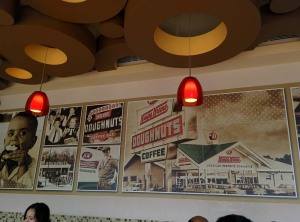 Both my husband and I decided we wanted to have a cold coffee each: I, a mocha; my husband, a cappuccino. Deciding on the doughnuts we wanted was a trifle more difficult, because the range on display was mouthwatering, glossy and plump doughnuts, all chocolate and vanilla and fruit and almonds and more. Eventually, I narrowed down on two that I wanted to try: a cinnamon-apple filled one, and a vanilla cappuccino. Either of those would do, I told the DH when he went to place the order.

He returned, to my (delighted!) surprise with not two but three doughnuts on the tray, along with the coffees. “I couldn’t decide between the two,” he admitted, “and I did want to try both of them, plus I wanted another doughnut.” The ‘other’ doughnut he’d ordered was a chocolate-topped, custard-filled one.

Krispy Kreme: a selection of doughnuts and coffee.

The coffees were just about average, certainly not Krispy Kreme’s strength. Both came with lots of ice cubes, which of course made them cool and refreshing, but the coffee itself hadn’t been adjusted to accommodate so much melting ice—the result being that our drinks were already quite watered down by the time we started on them.

The doughnuts, I’m happy to say, were far better: soft, fluffy, and with a very generous amount of well-flavoured filling. The custard-and-chocolate doughnut, for instance, oozed loads of good vanilla custard and had a good slather of melted chocolate on top. The cinnamon-apple filled doughnut had a lovely fruity filling of cooked and puréed apple spiced with cinnamon, almost like an apple jelly, and definitely my favourite of the doughnuts we tried. The only one I didn’t really care for was the vanilla cappuccino doughnut. This one, while it had a lovely custard filling, was topped with a spiral of vanilla and cappuccino frosting (which, admittedly, was what had attracted me to the doughnut in the first place—along with the fact that I love desserts flavoured with coffee).

Sadly, that attractive frosting was the downfall of this pretty doughnut. It was far too sugary for my liking, and the taste of coffee was almost non-existent: too mild, at any rate, for me to be able to tell whether there was any coffee in it or not.

Iced mocha and a vanilla-cappuccino doughnut: watery coffee, too-sweet frosting on the doughnut.

Our doughnuts and coffees cost Rs 558 (inclusive of taxes and service charges). The area is clean, very typical Krispy Kreme-themed, and the doughnuts are (despite the substandard—for me—vanilla cappuccino doughnut) overall very good. The staff is a bit clueless and poorly trained. One server, dishing up the doughnuts, got into an unseemly argument with the colleague who was making the drinks, because they’d got our order mixed up. My husband ended up getting called from one end of the counter to the other a couple of times before they got it all sorted out.

Still. We’ll be back. I want to try out some more of those doughnuts.