Till a couple of years ago, one of our favourite places to go for a good South Indian lunch in Vasant Kunj—somewhat upmarket (not Udupi style), non-vegetarian, yet not prohibitively expensive—used to be Zambar. Then Zambar shut down, and we mourned its demise. And hoped for something better to crop up.

This time, back at Ambience Mall and in time for a rather late lunch (it was nearly 3 PM), we saw that a new restaurant had opened pretty much where Zambar used to be. And, like Zambar, this one is a South Indian restaurant too: Peninsular Kitchen, specializing in—as the name suggests—food from the peninsular states (which means, of course, you don’t merely get food from Karnataka, Tamil Nadu, Kerala, Andhra Pradesh and Telangana here, but also from Goa and Maharashtra).

We took a quick look at the menu kept at the hostess’s desk outside the door, checked that they were still open for lunch, and were welcomed in. This is not a huge restaurant, but the décor—a large pillar with a boat-shaped base and metal birds ‘flying’ up the pillar; a display kitchen; pictures, motifs of anchors, fish, chillies and more; and a pleasing colour range of oranges and blues, complemented by clever lighting—makes this look larger than it is. 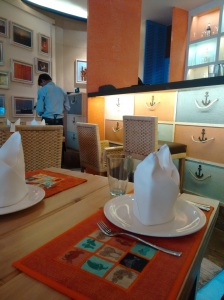 Though the menu is extensive and contained lots of interesting dishes that I’d have loved to try (Erachi fry? Crabs? Yes, yes, yes!), we were so hungry and so eager to get down to the business of eating that we decided not to waste time trying to figure out what we wanted to eat. So we opted for one of the set meals Peninsular Kitchen offers: the chicken curry lunch. (There are other set meals available too, including a fish curry lunch).

Our waiter informed us that we had three choices here: the soup, the dry chicken dish, and the bread accompanying the meal could all be either of two. Both of us chose the same options: mulligatawny (rather than rasam) for the soup; chicken Chettinad; and Malabar parathas (rather than appams). I ordered, from the mocktails menu, a coconut mojito.

Within a couple of minutes of the order being placed, a little amuse bouche had been served up: a small shot glass-size portion of sol kadi, pinkish-orange in colour, slightly tart from the kokum it’s flavoured with, mild and fragrant and just the perfect start to a southern meal. 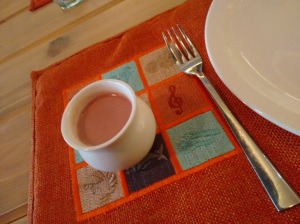 Up next came a bowl of strips of crisp fried papad, served alongside a set of four types of chutney: tomato, mint, coconut, and raw mango. These chutneys and papads are a common enough appetizer in South Indian restaurants, but what I especially appreciated about Peninsular Kitchen’s version was the gorgeously fresh, vibrant flavours of the chutneys. You could actually taste the herby freshness of mint leaves in the mint chutney, the tartness of raw mango in that chutney. Superb. 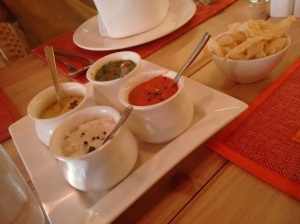 Papads and four types of chutneys at Peninsular Kitchen.

In the meantime, my coconut mojito—coconut water, brown sugar, wedges of lime, mint leaves and thin strips of coconut, lots of ice—had arrived too. Full marks there as well: it was deliciously refreshing.

Now the first course of our lunch was served up: the mulligatawny. Hot, peppery, with a garnish of cooked rice and very finely chopped fresh coconut. While this was good, it wasn’t terribly memorable: I’ve had better. 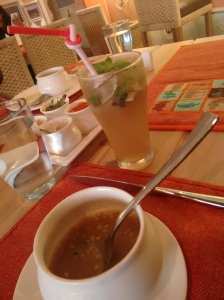 At Peninsular Kitchen: a mulligatawny, and a coconut mojito at the back.

Soup over, the main course was served up. This was in a large platter, with a generous heap of steamed rice in the middle, and the accompanying dishes arranged around it: a large bowl of chicken curry; the chicken Chettinad; a bowl of yellow daal; a small bowl of a salad-cum-raita; a bowl of dessert; and, balanced on top of it all, a fried papad. Our Malabar parathas—one each, more than enough—came in a bamboo steamer placed on the table between us. 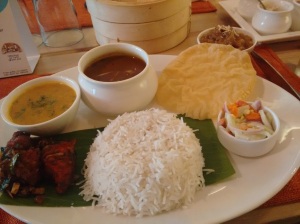 Impressions? The daal: very good, earthy, mild and simple. The sort of thing that reminds you of home and hearth. The Malabar parathas, gloriously flaky and light and possibly among the best Malabar parathas I’ve ever had. The salad (which consisted of thinly sliced cucumbers, onions, tomatoes, carrots, etc with a drizzle of yoghurt-based dressing) wasn’t something I’d paid much attention to when the food was put down in front of me, but one taste of this, and I wished there was more of it, it was so light and refreshing.

The chicken Chettinad, dry-fried with curry leaves, spices and chopped coconut, was delicious too. Spicy, but not too much, and with tons of flavour.

What disappointed both of us was the chicken curry. This was hot (which wasn’t a problem for us, since we had been expecting heat), but where it failed to deliver was in the taste: there was just too little depth of flavour, no interesting underlying notes coming up, nothing to lend complexity to the dish. Just chicken in a peppery, somewhat one-dimensional, gravy.

The dessert (the name of which I couldn’t catch, though our waiter did tell me) was a rich, halwa-like dish of rice cooked long with jaggery: sweet, luscious, not exactly the sort of thing you would be advised to have if you were on a diet.

By the time we finally put our cutlery down, we were full to the brim (and, may I add, had actually not been able to finish all our food: the portion sizes are generous). Barring the chicken curry, everything had been at least good, much of it excellent. The service was attentive and efficient, the waiters knowledgeable and able to answer whatever questions we had regarding items on the menu. We didn’t have to hang around waiting for our food, or for the bill—all of it came quickly.

And the icing on the cake? Our entire meal cost us just Rs 1,235. For a meal of that quality and quantity, in a place so pleasant, that’s a steal. Definitely recommended.