Of the three Kapoor brothers—Raj, Shammi and Shashi—Shashi Kapoor is the one who falls in the middle when it comes to my personal preferences. Raj Kapoor I tend to not like (except in the occasional film now and then, like Chori-Chori or Teesri Kasam). Shammi Kapoor I am nuts about and will gladly watch in just about any film from his heyday. And Shashi Kapoor—well, he did act in some films I don’t like at all (Bombay Talkie, Benazir, Satyam Shivam Sundaram, Aa Gale Lag Jaa, Raja Sahib…), but he also acted in some of my favourite films. In Prem Patra, for instance. And Waqt. And Pyaar Kiye Jaa. And my guilty pleasure, Sharmeelee.

He was wonderfully handsome in a boyish sort of way, he was a versatile actor (compare, for instance, his hot-headed young Hindu radical of Dharmputra with the madcap of Pyaar Kiye Jaa), he was extremely watchable. (And, to his credit—or his wife, Jennifer Kendall’s?—remained relatively well-preserved until quite late. Of the three brothers, Shashi had the longest innings as a believable leading man, all the way from the start of the 60s to the early 80s).

(Actually, I should perhaps change that opening sentence of mine. Shashi Kapoor doesn’t fall into the middle for me. He is not as much a favourite of mine as Shammi Kapoor was, but he comes close. Very close).

I was, therefore, very happy to hear that the powers that be have woken up to the fact that Mr Kapoor deserved the Dadasaheb Phalke Award. Rather late in the day, but anyway. It’s still cause for celebration. And, since Shashi Kapoor was to have been formally given the award this month, why not celebrate, I thought, with a list of ten of my favourite Shashi Kapoor songs? These are all, as always, from pre-70s (with one exception) films that I’ve seen. They’re all Shashi Kapoor solos (though one has a chorus included), and are listed in no particular order.

Here we go, then:

1. Khilte hain gul yahaan (Sharmeelee, 1971): When I mentioned that there was one exception amongst the ‘pre-70s films’, I meant this one. And for a reason: not just because I like this song a lot (though there are Shashi Kapoor songs from much later in the 70s that I also love), but because Sharmeelee always strikes me as more a late 60s film: its tone, its cast, its music, its costumes—are all more reminiscent of late 60s films than those of the 70s.

And this song is timeless. Khilte hain gul yahaan appears in two versions—male and female—in Sharmeelee. This one, the male version (sung by Kishore Kumar) appears pretty much towards the beginning of the film. The lyrics follow an oft-repeated theme: life is ephemeral (“Khilte hain gul yahaan, khilke bikharne ko/Milte hain dil yahaan, milke bichhadne ko”), so grab the moment: fall in love. Despite the patently fake rose, Shashi Kapoor is gorgeous. 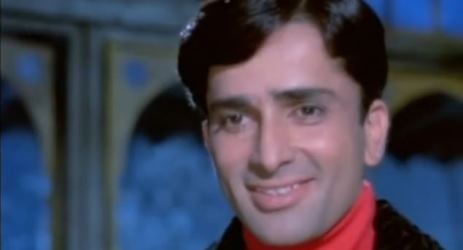 2. Tum bin jaaoon kahaan (Pyaar ka Mausam, 1969): Another lady, another serenade, another song which appears in multiple versions within a film (Tum bin jaaoon kahaan is picturised twice on Bharat Bhushan, lip-syncing to the voice of Kishore, and twice on Shashi Kapoor, for whom Mohammad Rafi sings playback). The second, sad version picturised on Shashi Kapoor is the song just before the climax: a piano song. This one, the happy romantic one (with Mr Kapoor strumming a mandolin) is, in my opinion, the better one. It’s quintessential romance: I can’t live without you, you are my life. Nothing terribly memorable about the lyrics, but the music and rendition are lovely, and both Shashi Kapoor and Asha Parekh are very easy on the eyes. 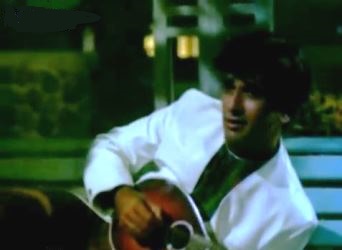 3. Likhe jo khat tujhe woh teri yaad mein (Kanyadaan, 1968): While we’re on the subject of Shashi Kapoor and Asha Parekh, here’s a lovely song from another film in which they acted opposite each other. Kanyadaan isn’t a film I like; the heroine is irritatingly, obstinately, illogically old-fashioned about being ‘married’ to the man she had been promised to as a child. In this song, though, she is being serenaded by the man who loves her—and whom she, too, has fallen in love with.

Against a backdrop of snowy mountains, pine woods, and a beautifully green landscape, our hero romances the lady, telling her what her love means to him. I love the different shades of love Shashi Kapoor manages to depict through his expressions here, all the way from playful mischief to seductive naughtiness, to the dreamy-eyed sweetness of the utter romantic.

4. Kehne ki nahin baat magar ab zor se kehna hai (Pyaar Kiye Jaa, 1966): From serenading to lambasting, from the romantic to the ridiculous. In the hilarious Pyaar Kiye Jaa, Shashi Kapoor is the poor young man who gets fired from his job after he annoys his wealthy employer’s daughters. Instead of being the noble hero who slinks off to find another job (invariably in the army), this man grabs the bull by the horns and hurls invective at it. He collects his friends, band and all, and sings a song to his ex-boss, calling him all sorts of names, from a chaar sau bees to an aath sau chaalees—and more.

Someone once told me that Shammi Kapoor was the only romantic hero of the early 60s (not counting comic heroes like Kishore Kumar) who had no inhibitions about dancing. This song was one I pointed out to refute that assertion, because Shashi (who also shows his lack of inhibitions in other songs, such as Suno suno kanyaaon ka varnan from Haseena Maan Jaayegi) is completely crazy here. He leaps about, hops around, lets himself be drenched, and generally ends up not behaving at all like the quintessential Hindi film hero. Totally delightful.

5. Yahaan main ajnabi hoon (Jab Jab Phool Khile, 1965): Most people tend to associate Jab Jab Phool Khile with either Pardesiyon se na ankhiyaan milaana or Ek thha gul aur ek thhi bulbul. I freely admit I hate both of those songs: the one Shashi Kapoor solo I do like from Jab Jab Phool Khile is this one, quieter, sadder, more sedate. Uprooted from his home and his life as a houseboat-owner in Kashmir and transplanted in Bombay (where he’s given a makeover)—all for the sake of love—our hero realizes that this high society life is not for him. He is a stranger here, an outcast. They have no use for him, and he has no use for them.

Shashi Kapoor brings out the emotion behind the song very well: he is bitter, but he also realizes that it’s not the fault of the girl he loves; it’s just that he and she belong in two separate worlds. He still loves her—you can see it in his eyes—but her world is not his.

6. Bhool sakta hai bhala kaun yeh pyaari aankhein (Dharmputra, 1961): In his first film as an adult, Shashi Kapoor played a role that wasn’t terribly likeable: his character is a radical Hindu, very bigoted and filled with hatred for all Muslims—little aware that his own biological parents are Muslim. He isn’t, however, evil through and through, and the softer side of the man is revealed in his feelings for the beautiful girl (a very pretty Indrani Mukherjee) whom he falls in love with.

This song, a gentle and soothing love song in praise of the beloved’s eyes, her sweetness, her loveliness—is a particular favourite of mine. Mahendra Kapoor’s voice fits Shashi Kapoor surprisingly well; N Dutta’s music is perfect, and Sahir—well, Sahir is sublime. Plus, Shashi Kapoor and Indrani Mukherjee—shy, hesitating, sweet—are wonderfully convincing as the two young lovers only tentatively stretching out their hands to each other.

7. Chale thhe saath milke chalenge saath milkar (Haseena Maan Jaayegi, 1968): Seven years down the line from Dharmputra, Shashi Kapoor woos onscreen another woman—this time Babita, who plays the role of Shashi Kapoor’s wife (but is this man really her husband? Or an impostor, taking advantage of the fact that he looks exactly like the man she married?) Whatever, this is a sweetly romantic song, which turns definitely seductive as our man turns on the charm and makes it pretty clear that he has more on his mind than mere piano-playing. 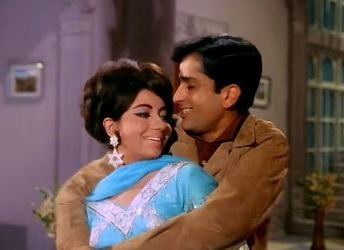 8. Woh tere pyaar ka gham ek bahaana thha sanam (My Love, 1970): My Love was a forgettable film with a barely-there plot about love coming up against a wealthy (and overbearing) parent’s ambitions, coupled by the age-old trope of an obedient (and easily bullied) lead who gives in to emotional blackmail and pretends to have never been in love anyway. Just a farce, ha-ha.

What My Love did have was a very unusual setting—Kenya, with its Masai warriors, its wildlife, and haunting African music.

And this song. Mukesh doesn’t usually rank among my favourites, and I don’t usually think of him as Shashi Kapoor’s voice (though Mukesh did sing playback for him in several films) but Woh tere pyaar ka gham is the reason I watched My Love in the first place. The music is beautiful, the words—yes, heartbroken and believing that the lover has been unfaithful, but more than that, cursing one’s own destiny—and Mukesh’s rendition. And, of course, Shashi Kapoor, who manages to look soulful and handsome, stubble and all.

9. Abhi na phero nazar (Biradari, 1966): Like My Love, Biradari is one of Shashi Kapoor’s less known films. Unlike My Love, however, it’s a good film, heartwarming and sweet and well-made: a film about a small community in a chawl, with all its accompanying joys and sorrows, trials and tribulations, triumphs and many relationships.

With a score by the oft-underestimated Chitragupta, Biradari had some fine songs. My favourite of the Shashi Kapoor solos is this sweetly romantic song. Abhi na phero nazar is gentle and very romantic. Faryal isn’t much of a favourite with me, but Shashi Kapoor so completely dominates this song that I don’t really notice her much, anyway. 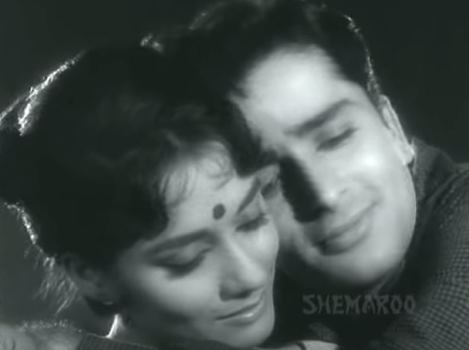 Like Paraayi hoon paraayi (also picturised on Shashi Kapoor, but with Asha Parekh lip-syncing to the song), or the more famous Ek ghar banaaoonga tere ghar ke saamne, Phir aane laga yaad wohi pyaar ka aalam has a man in his cups, beginning to imagine that his beloved has emerged among the bottles, the ashtrays, the glass of daaru. Here, despite the romantic nature of the song, it ends in a rude awakening, because our hero comes to his senses, aware that this is all just a pipe dream.

So those are my favourite Shashi Kapoor solos. Which are yours?

139 thoughts on “Ten of my favourite Shashi Kapoor songs”