Or, since the Neemrana Group insists on calling its properties ‘non-hotels’, a non–hotel review.

Over the years we’ve been married, my husband and I have developed a love for the properties of the Neemrana Group—and it all began with this one, currently the group’s hotel which is closest to Delhi. The Neemrana Fort Palace, just off the Delhi-Jaipur highway, is a 15th century hill fort above the village of Neemrana.

A little lawn and courtyard in Neemrana. 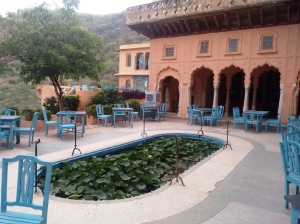 A courtyard with a lotus pond, in Neemrana.

This has been restored, added to, landscaped, and converted into a sprawling heritage hotel, complete with spa, gym, two swimming pools, hotel shop and souvenir centre, children’s play room (albeit rather dusty and dingy), and daily evening cultural performances of traditional music and dance (even as I type this, someone’s singing a traditional version of Laal meri pat outside, in the courtyard near our room). You can go on camel rides (which can include a trip to the hotel’s own gardens, where organic vegetables are grown—which end up on the hotel’s tables). You can walk down, as we once did—though it’s through the village, and a dusty trek—to an interesting old baoli or step well. Or you can, as we mostly do, just relax. Read, sleep, loll about from one meal to another.

September isn’t the best time to visit Rajasthan, but since we had a long weekend, we decided to take advantage of it, and go off to Neemrana. The fort stretches over many levels, connected by stone staircases, ramps, and walkways, such a sprawl that it’s easy to get lost. Our room, called Malabar Mahal, was fairly close to the reception as well as to the area where evening tea is served.

True to its name, Malabar Mahal looked like a bit of Malabar transported into Rajasthan: all the furniture, fixtures, pictures and more were very evocative of Kerala: brass lamps hanging from the ceiling; solid wooden pillars; a high and impressive bed (so high that it needed footstools on either side); reproductions of Raja Ravi Varma’s paintings, an old painting on wood of a Christian saint (Thomas? I wonder), etc.

A lovely old painting on wood.

One thing I especially liked was that even the more mundane practical things were elegantly ‘disguised’. The minibar, for example, was tucked away inside a small wooden cupboard, and the salver with the tea and coffee fixings was covered with a circle of block-printed cotton. 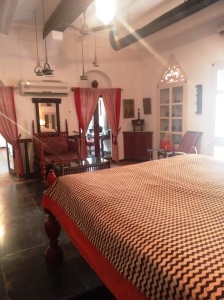 Inside Malabar Mahal: the height of that bed is impressive!

And you can see obvious signs of where features of the original fort, instead of being razed and built over, have been incorporated into the design. The niches are intact and house little objets d’art; sections of carved stone filigree have been covered with glass to let in light, and some of the many windows have been turned into cupboards or showcases for art.

The side effect of this is the sometimes uncomfortable part of actually staying here. Our room, for example, was connected to the bathroom through a corridor (fortunately part of the room, rather like a suite). And the bathroom itself was on two levels: the WC sat regally all by itself in a narrow little cubicle two high steps up from the bathing area and sink. Rather inconvenient, especially if you needed to go to the loo in the middle of the night, all bleary-eyed and groggy.

Also—considering this is Rajasthan, which is pretty hot through much of the year—there was no fan either in the bathroom, or in the corridor (which, by the way, made a good sitting area, what with its low stools and diffused sunlight) or even in the tiny study, with its desk, chair and wardrobe.

As in most Neemrana properties, the food service here is basically buffet (though there is a Japanese restaurant, Kanak Mahal). Venues for the buffet vary, though it’s mostly in a hall overlooking the swimming pool.

Neemrana: A view of one of the swimming pools.

The dining room at Neemrana.

The buffet’s a mix of Indian (with at least one local Rajasthani specialty) and Continental dishes, and the occasional East Asian dish. As I expected, the Indian dishes—from something as simple as moong dal to paneer lababdaar and rasmalai—outshone the Western dishes, though some salads, like an eggplant one with capers and olives, and a cucumber one with a yoghurt and garlic dressing were fabulous.

Breakfast at Neemrana: just a sample. 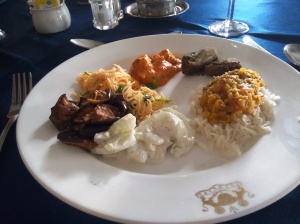 Lunch at Neemrana: some of the food.

A selection of desserts.

Daily breakfast and evening tea and coffee (which comes with snacks—some lovely chocolate cake, and assorted cookies, on our first day) are included in the room tariff.

Rates for lunch and dinner buffets are fixed, and you can order extras—drinks (soft or alcoholic), pakoras or other snacks at teatime, and so on—which are charged separately.

Neemrana isn’t perfect. The evening cultural performances may appeal to some (especially foreign tourists, many of whom stop by), but if you’re staying more than one night, as we were, it can become intrusive. The public spaces, since they’re so huge, can be hard to keep scrupulously clean —the little courtyard outside Malabar Mahal had two empty, crushed plastic bottles of mineral water lying about when we arrived. When other parts of the fort are being restored or added to (as they were while we were here), the sounds and sights of construction can be irritating.

Worst of all, on the second (and last) night that we spent here, it started raining—and so hard inside the corridor of Malabar Mahal that we had to get housekeeping to put a couple of buckets to catch the water (they were half-full by the morning), and we had to spread out bathmats, a bathrobe, etc, to prevent slipping in the puddles. Plus, my husband found a mouse cavorting about the room at night.

Despite all of that, this is still a nice place. The view—especially at sunset—is splendid. The parrots, squawking as they dive into their nests in the walls of the fort, are a vivid green against the beige and tan of the building. The courtyards and balconies are picturesque, and the place is so vast that it’s not difficult to find some quiet and tranquil place where you can settle down for a good read.

Just a word of caution: while some areas are wheelchair accessible, most are not—and several ramps (including the one leading to the hall where buffets are usually laid out) need fairly sure footing. The elderly, infirm, and small children should watch out (do note: once you’ve parked your car, you have to walk a couple of minutes before you even get to the reception).