Those who know me well know that I’m not much of a tea drinker. Given a choice, I’d rather have coffee, the stronger, the better. Sometimes, though, I like a cup of tea. Especially when it’s deepest winter, and when I have a bad cold. There’s nothing like a big cup of hot, kadak masala chai—the type my mum-in-law makes, and which I’ve never even tried to make—to soothe a sore throat and just generally make you feel better.

It seemed almost inevitable, then, that just a couple of days after a Chaayos menu arrived tucked into our daily newspaper, both my husband and I caught horrid colds and coughs. We were sniffing and sneezing and feeling like death warmed up when I fished the Chaayos leaflet out of my desk drawer and said, “Why don’t we order some chai?”

Chaayos, as its name suggests, specializes in tea of different types. Hot and cold. Very ‘Indian’ concoctions, brewed long and strong, heavy on the tea leaves, the sugar, and the milk. Refined English teas and Earl Grey. Darjeeling. Some coffee, and a few cool drinks, both tea-based as well as non-caffeinated. There’s plenty here for the tea lover, and enough for someone who’d rather have something other than tea, as well. 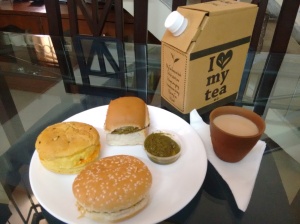 An array of snacks: keema pav (with some green chutney on the side), bun maska, bun bhujia – and a kulhad of chai.

Chai isn’t the only thing Chaayos offers, even if it is the highlight of their menu. No; Chaayos also offers a range of snacks, all the way from sandwiches to bun maska (the original, as well as with variations on the theme); pav with different fillings; cookies, and wedges of un-iced cakes.

We, so exhausted that we couldn’t even muster up the courage to make lunch, decided we’d order an assortment of snacks to go along with our tea. My husband, instead of phoning Chaayos, installed the Chaayos app on his phone and placed the order through that—quick and convenient.

Within about 45 minutes (the time they specify on the menu), our food and drink had arrived in an assortment of paper bags. [Yes, Chaayos do use rather a lot of paper—each snack was packed in a separate cardboard box all by itself, even when two snacks could’ve been packed together. The environment-loving me recoiled]. 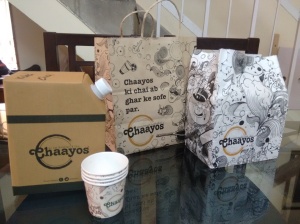 This was what we’d ordered, and how it turned out:

Keema pav: One of the few non-vegetarian options in the menu (other than in the sandwiches section). Spicy mutton keema sandwiched between pav, and sprinkled with a garnish of finely chopped raw onions. I’d have liked the chillies in the keema to have been a little less, but it wasn’t spicy enough to put me off it, so that was all right. Also, I like my pav lightly toasted on the inside, which wasn’t the case here. Good, not great.

Achari bun maska: A plain bun maska (a bun, cut in half and slathered with butter) isn’t a favourite of mine (in sharp contrast to well-buttered hot toast, the very thought of which can make me drool). But the Chaayos menu has bun maska—and its variants—in relative abundance, so I decided I had to try one. The achari bun maska, which has the butter flavoured with pickling spices, and therefore tasting somewhat like mango pickle masala had been mixed into the butter, was so-so. While the flavour was fine, the texture was too homogenous to be interesting: it would have been far better if one could actually get bits of spice—fennel seeds, mustard seeds, stuff like that—to break the monotony of the bun and butter.

Bun bhujia: Both my husband and I are fond of egg bhujia (for those not in the know, the north Indian version of scrambled eggs: eggs cooked with chopped sautéed onions, tomatoes, green chillies, ginger, and so on—sometimes all, sometimes just a couple of those ingredients). We were both so excited when we saw bun bhujia on the Chaayos menu, we didn’t even stop to see whether there was a ‘non-vegetarian’ asterisk next to the item. And we didn’t stop to think bhujia could mean other things. We simply ordered two of them straightaway.

And what did it turn out to be? A bun cut in half and liberally buttered, and sandwiched with a generous tablespoonful of Haldiram’s bhujia, those thin, lightly spicy squiggles of fried besan that are such a ubiquitous topping for everything from poha to chaat across much of North and Central India. This came as a surprise, but not an unpleasant one, and not even something unknown: there was a time when bhujia sandwich was one of my favourite guilty treats. Chaayos’s bun bhujia reminded me of those days, and was good.

Carrot cake: I have a sweet tooth: if there’s a dessert available, I’m almost certain to try it, provided it’s not one of those ghee- and sugar-laden Indian mithais. Carrot cake is one of my all-time favourites, so when I saw this on the Chaayos menu, I had to order it. What arrived was a disappointment. Okay, I wasn’t expecting cream cheese frosting and the works, but still. This one had not a trace of walnut, not a single raisin, not a hint of spice, and only a very few threads of grated carrot in it. It was also rather too dense, to the point of being chewy: certainly not a good cake. 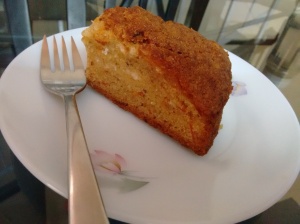 Chaayos’s carrot cake: nothing to write home about.

Desi chai: Of course, we had to order chai. My husband, for whom the word ‘experiment’ has no limits, ordered the desi chai. This comes with lots of customizations possible: regular or kadak chai patti; different proportions of milk to water; and up to twelve add-ons, ranging from the popular ones like ginger, masala and elaichi to somewhat whacky ones like green chillies and ajwain. My husband ordered a medley of add-ons, not the entire gamut, but most of the more predictable ones.

The Chaayos ‘tea kettle’ is an interesting one. An insulated pack inside a cardboard box, with a screw top lid and a spout to enable easy pouring. They say that the kettle will keep the tea hot for an hour and a half; we didn’t put it to that test, but yes—the tea certainly was good and hot when it came out of the kettle, and stayed hot in the kettle for the leisurely half-hour or so it took to finish off all three cups of it. (They say four cups, but that’s valid for the mid-sized paper cups they send, along with stirrers and sugar sachets; we used our own china mugs at home).

Kulhad chai: Among the specialty chais on offer are everything from rose cardamom to cinnamon green. I was in the mood for something more desi—and kulhad chai sounded good. This came with (instead of the usual paper cups) good old-fashioned earthen kulhads, which do make the tea taste different. Good, soothing tea, not too heavy on the milk, not too weak, not too strong—just right. In fact, it came with sugar already added (and to the right extent), so I didn’t even need to sweeten it.

So that was it. Lots of good tea, more or less passable snacks (the cake, no), and all for the princely sum of Rs 711, all taxes included. Considering we were full to the brim by the time we finished, I’d call that a steal.

In fact, this was such a satisfying comfort food experience that we ended up ordering again, a couple of days later, and a few days later, again. The second time, while my husband stuck to the tried and tested, I had a poha, a lemon cake, and a pahadi chai. The milkless pahadi chai, tart with lime juice, reminded me of a long-ago trip to Binsar and Almora and the environs… very nice. The poha, dotted with peanuts and with a good sprinkle of bhujia on top, came with two wedges of lime to be squeezed on top. Also good; in fact, my favourite of the snacks I’ve had from Chaayos so far. 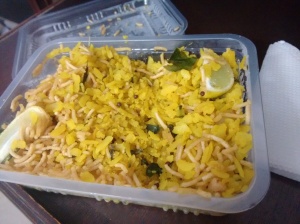 The lemon cake, sadly, was a disaster. The lemon component seemed to have come out of a bottle, and the cake itself had been cooked too much: in places it had turned biscuity, even brown instead of the otherwise fairly uniform yellow of the crumb.

The third time we ordered, we tried the egg bun—a bun sandwiched with an interesting egg salad: chopped boiled eggs, mixed with mayonnaise, kernels of fresh corn, and a lot of chopped basil. Unusual, interesting, and good. We also tried the oatmeal cookies (which were very light and crumbly, tasted all right, but didn’t really match up to my idea of a chewy oat cookie), and I had the aam papad chai: a milkless tea with a definite flavour of mangoes in it. Very nice.

No, I probably won’t be ordering their cakes again, but Chaayos I will definitely go back to. It’s good enough to turn me a tea freak.

(Chaayos serves almost all across Delhi and its neighbouring towns of Gurgaon and NOIDA. They deliver from 8 am to 8 pm).