Fellow blogger Harini and I have almost made it a ritual to meet up every couple of months on a weekend to spend a few hours together lunching, having coffee and tea, and chatting about books, cinema, and just about everything else. The first time we met, we decided to meet at Khan Market, since it was relatively easily accessible for both of us – and it offered a sufficient range of restaurants and cuisines to choose from. And, creatures of habit that we both seem to be, we have stuck to Khan Market. We’ve been to several restaurants in the market, and try to make it a point to visit some place new every time we come here.

This last Saturday, Harini, asked to pick a place for lunch, offered a choice between Au Bon Pain and Wok in the Clouds, both of which are pretty close to each other, in the middle lane. We stood in front, looking from one to the other – and then we noticed this rather charming-looking restaurant in the middle, on the ground floor (very unusual for Khan Market, where most restaurants are on upper floors). La Vie, a pizzeria (yes, with a name like that, I’d have expected it to be French food, but…) 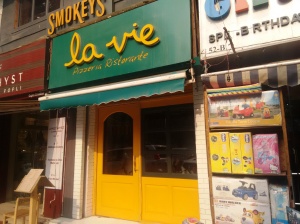 The entrance to La Vie, in Khan Market’s Middle Lane.

Both Harini and I like pizza, so (and mostly because I just liked the look of the place), I suggested La Vie. So we went in, a little surprised at the wood-fired oven and the somewhat cramped entrance – until we realized we’d entered at what is actually the staff entrance. The main entrance to La Vie is not through the middle lane but the back.

Anyway, we went in, and a few steps through, into the dining area, which is a long, narrow room rather like a broad corridor. With yellow painted tables, hunter green chairs and colourful murals of old European streets, half-timbered houses and all, this immediately appealed to me: there’s something warm and welcoming about it.

Luckily, we were relatively early for lunch (it wasn’t even 1 in the afternoon), so except for one other table, the rest of the place was empty. Harini and I got a table for two (most of the tables are for two) and had a look at the menu. This is a manageably small selection: some five or six salads, around ten appetisers, a few pastas and main courses, a handful of desserts, and soft beverages (including shakes, aerated drinks, and very basic tea and coffees). And pizzas from a wood-fired oven.

I am not a pizza freak, but I do like them now and then. And when I eat pizzas, I like to take the path less travelled. Give me the white pizza, the unusual toppings, and I’m happy. La Vie, thankfully, seems to cater to tastes like mine: they have some interesting pizzas, even though the range isn’t huge (there are only about a dozen, perhaps fewer options each in the vegetarian and non-vegetarian sections). I dithered between three options – one with eggplant, another with balsamic-marinated mushrooms, and a third with potatoes and leeks – and finally settled for the potato and leek pizza, which is called The Irish Farmer.

Harini chose a gnocchi in roasted pepper sauce. We had a wait of about twenty minutes or so before our food arrived. Both were European size portions, not outsize (I’d chosen an 8” pizza, though a 12” one is also available). Harini’s gnocchi, which came with lots of fiery-looking deep red sauce, had roasted red pepper as a base, with bits of broccoli studded in it. I had a taste, and found it a wee bit hot for my liking (the gnocchi too was somewhat more floury than I like my gnocchi to be). 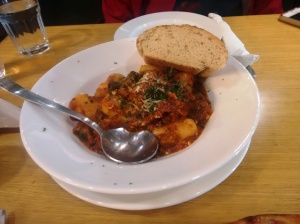 My pizza, on the other hand, pleased me a lot: it ticked all the boxes. The thinly sliced potato was slightly crisp, the leek soft and caramelised and lovely, the cheeses – mozzarella and cheddar – just right when it came to quantity. There was a light touch of herbs, and the tomato sauce wasn’t conspicuous (I am not a fan of tomato sauce). I loved this pizza. 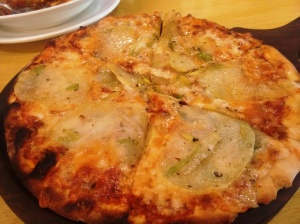 Because our main courses hadn’t been huge (and because I’d noticed apple crumble – a particular favourite of mine – on the menu), we decided to have dessert as well. Harini wasn’t keen on a full-fledged dessert and wanted only some ice cream. The restaurant, though it serves ice cream as a side with a couple of desserts, doesn’t serve ice cream as it is, so Harini ended up ordering a walnut brownie with ice cream. I, of course, ordered the apple crumble.

And we sat back, and waited, and waited. We wondered if they’d gone to pick the apples. We wondered why it should take so long to just pull readymade desserts out of the dessert counter (which was right there, behind us).

When our desserts were served, about twenty minutes later, and I was cautioned that my ramekin was “very hot”, I realized why we’d had to wait so long. The apple crumble had come straight out of the oven. The flour-butter-and-sugar topping had perhaps a little too much flour in proportion to the butter, but it was still good: hot and fragrant with cinnamon, with lots of beautifully cooked apple underneath and a scoop of slowly melting vanilla ice cream on top. Lovely.

The apple crumble at La Vie.

Harini’s brownie looked rather like the mass-market brownies you see in coffee places all across India: rather thin and very dense, even if chocolatey enough. It came with the vanilla ice cream on top, plus a generous drizzle of chocolate sauce. Harini ate a little over half of it, then left the rest, unable to manage any more. I didn’t taste any of it, but I doubt if I’d have been able to eat it all – it looked just too rich.

But, final verdict: yes, I had a great meal, a warm, comforting happy meal. The ambience is friendly and informal, the sunlight pouring in through the glass door at the main entrance lights up everything, and what I ate pleased me thoroughly. I am certainly coming back here. On a relaxed day, when waiting a long while for food isn’t going to be a problem.

We paid Rs 1726 for our meal, including all taxes and service charge. Steep (considering this was not very exotic, vegetarian food) but then, that’s Khan Market for you.