It’s been a long time since I reviewed a restaurant. Part of the reason has been that, what with the Little One (or the LO, as I refer to her) in tow, we’ve had to confine our eating out to places where she was—till recently—willing to attempt to eat something. [The LO is not one of those children who will happily eat; she has the most exemplary self-control of anyone I’ve seen]. About the only thing she would agree to eat if we went out for a meal was fries. [Yes. Facepalm. I am not a fan of junk food, so this was not at all something I appreciated].

Anyway, the good news is that suddenly, over the past few months, the LO has become less fussy about eating out, and more adventurous. We too have discovered that there are some things—crispy, crunchy stuff, or noodles, or meat in pretty much any form [she is a devoted meat-eater, this little girl]—have the best chances of being eaten. So we’ve started going to places other than burger joints.

The other day, visiting Select CityWalk, we noticed that a Burma Burma outlet had opened there. I’d eaten at the Burma Burma in Gurgaon and loved it, so I was quick to suggest that we eat lunch here. Luck was on our side: even though the restaurant was pretty packed, there was a table for three available.

The décor at Burma Burma is really appealing, especially the massive light fixtures that hang from the ceiling. The LO, for one, couldn’t take her eyes off the huge cane lampshades—or the shelves of prettily painted wooden dolls along one wall, and the opposite wall, with its (stucco?) patterns of rows of fish, lotuses, fans and more.

Pretty lampshades hang from the ceiling at Burma Burma.

Burma Burma is unique not just in that its cuisine—Burmese, of course—is one not often encountered in Delhi (except in the form of khao suey), but in that it’s also completely vegetarian. The menu is pretty extensive, with a range of soups, salads, starters (including dimsums), curries, stir-fries, noodle dishes, rice (there’s a separate section only for sticky rice dishes), desserts and drinks. Among the drinks, I immediately homed in on the bubble teas and ordered an Oreo bubble tea for myself. My husband, following my lead, ordered a yuzu bubble tea. I’ve had this at the Gurgaon Burma Burma, where—the bubble tea being served in milk bottle-like glasses, and the tapioca pearl ‘bubbles’ clumping at the bottom of the straw—it had ended up being a very messy affair. So (as I had done eventually in Gurgaon) I asked for the bubble tea in a glass rather than a bottle.

For food, we chose spring onion crisps as a starter, followed by dry khao suey and a ‘trio of mushrooms’ as a mains.

The bubble tea came, and was greeted with some suspicion by the LO. My Oreo bubble tea, when identified as being Oreo [something the LO adores], was immediately sampled, but was given a thumbs-down. [Not by me, I hasten to add: I liked it]. The yuzu bubble tea, all citrusy and lovely, was a big hit with the LO, though, and her father had a hard time getting her to stop drinking it so that she could eat her food.

Talking of food, then. [And here, too, there was a huge thrill for the LO: she got a kiddie plate, little compartments and all, along with a plastic spoon. Not ‘adult’ crockery and cutlery. Major excitement, and something we appreciated a lot too].

The spring onion crisps were strips of spring onion, onion, and tomato covered with a thin batter (rice flour? I don’t know) and deep fried, tempura style. Though there were several sauces on the table, these crisps had so much flavour of their own that we ate them mostly as they were. The LO, informed that these were ‘like fries’, agreed to taste some and liked them so much that she’d happily have made a meal only of them. The pleasantest surprise here was the tomato crisps: I’d have expected a batter-coated tomato strip, even with the pulp missing, to go limp and soggy, but it didn’t. Delicious. 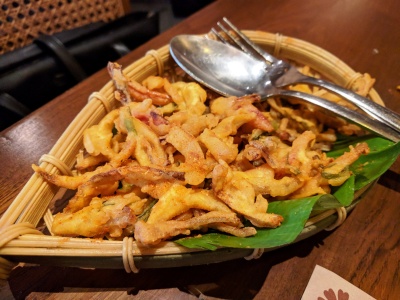 The dry khao suey came next (the trio of mushrooms took a long time coming, and was served up only after a long wait and two reminders). I’ve had the ‘regular’ khao suey—a hearty noodle and chicken soup with lots of spiced coconut milk—dozens of times, but never this. It turned out very nice indeed, rather like a noodle stir-fry with onions and various spices (no, not hot). Along with it came a selection of garnishes: chopped spring onions, fried onions, fried garlic, roasted peanuts, a dry roasted red chilli powder that was tasty rather than blow-the-roof-off hot, and wedges of lime.

The garnishes for the dry khao suey.

By the time the trio of mushrooms arrived, we’d finished most of the dry khao suey—which, in an odd sort of way, proved a blessing, because it allowed us to taste the mushroom dish unadulterated. And it was certainly worth the wait: three types of mushrooms (button, black Chinese, and snow ear) in a thick yellow sauce which was fragrant, rich in turmeric and absolutely lovely. There were pieces of bell pepper, red, yellow and green, in the sauce, but the mushrooms dominated, and were there aplenty. The LO turned up her button nose at the snow ear (which I loved: such a wonderful texture) as well as the black Chinese mushrooms, but the button mushrooms were such a hit with her that her parents had to dredge up every single piece of button mushroom we could find in our own plates and transfer to her plate. 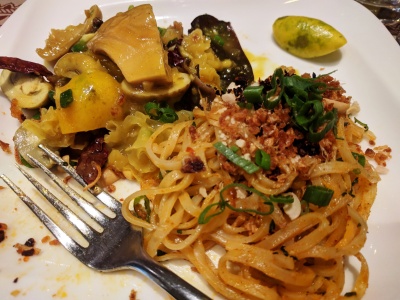 The dry khao suey, and the trio of mushrooms.

Even though there were several delicious-sounding dishes on the dessert page of the menu, we had to pass them up: we were just too full for anything more. But we will be back, because this is certainly a restaurant I want to return to. More than once.