By which I mean:

(b) and unusual because the actor in question is a well-known face, but doesn’t usually lip-sync to songs.

The idea for this post arose because of this wonderful post on Ashok Kumar’s songs, over at Ava’s blog. Ava drew attention to the fact that Ashok Kumar—one of the stalwarts of Hindi cinema, and with a pretty long stint as hero, too—rarely lip-synced to songs. In the post, another similar example was pointed out, in the case of Balraj Sahni: also a major actor, also a ‘hero’ in a lot of films, yet a man who didn’t lip-sync to too many songs.

That set me thinking of other people, other actors and actresses, who have rarely ‘sung’ songs onscreen. Not that they’re otherwise unknown; this is not a case of ‘Who’s that lip-syncing?’, but a case of people one generally doesn’t associate with doing too much singing onscreen. The leads of films (barring exceptions like Ashok Kumar or Balraj Sahni) are invariably excluded, because most songs end up being picturized on them. Major comedians, like Johnny Walker, Rajendranath, and Mehmood, also often had a comic side plot and a romance of their own, which allowed them to ‘sing’ often enough in films (have you ever seen a film that featured Johnny Walker and didn’t have him lip-syncing to at least one song?) And the dancers—Helen, Kumkum, Madhumati, Laxmi Chhaya, Bela Bose, et al—may appear in a film for only five minutes, but you could bet those five minutes would be a song.

Which leaves us with the somewhat more unusual people, the actors who played non-comic roles, character actors. Not stars, not dancers, not comedians. The Manmohan Krishnas, the Lalita Pawars, the other not-often-seen-‘singing’ characters. Here, then, are ten songs that are picturized on people not usually seen lip-syncing. As always, these are in no particular order, and they’re all from pre-70s films that I’ve seen.

1. Basti-basti parbat-parbat (Railway Platform, 1955): Manmohan Krishna. Manmohan Krishna, kindly and avuncular old gentleman of Hindi cinema, usually played the quiet and sweet (and often impoverished) father, uncle, grandfather. A lot of his roles required him to be a sort of male version of Leela Chitnis: put upon, having to plead, generally distressed. Not the sort of situations in which anyone would be keen to do much singing, even of sad songs.

In Sunil Dutt’s debut film, however, Manmohan Krishna not only appears (as a mendicant), but also sings one of the most famous songs of the film, a song that plays as the credits roll, and which continues after the credits. Plus, it appears at a later stage in the film as well. A philosophical song about the ephemerality of life.

2. Eent ki dukki paan ka ikka (Howrah Bridge, 1958): Om Prakash. Compared to Manmohan Krishna, Om Prakash was rather more versatile when it came to being cast: from the hero’s sidekick to the hard-hearted and greedy seth, from the naïve brother-in-law to the canny crook: he played just about every role there was besides that of the lead. He did appear onscreen, singing, in a handful of songs—but not enough to be billed as one of those actors who often had songs picturized on them. Here, in one of the classic suspense thrillers of the 50s, he acts the tonga-wallah who employs an interesting method of alerting the stowaway in the back about danger: he sings of the city they’re driving through—Calcutta—and warns of the dangers that lurk beneath its façade of charm and sweetness.

3. Sanam tu chal diya rasta (Maya, 1961): Agha. Agha, who acted in comic roles in lots of films across the 50s and 60s (and till well into the years after, too) never quite managed to make it into the same league as Johnny Walker or even Mehmood—which meant that even in films where he had a sizeable role (often as the hero’s buddy, with a girl to woo), he rarely lip-synced to songs. (Note the qualifier, ‘rarely’: this was the man who lip-synced to the cynical Andhe jahaan ke andhe raaste in Patita). Here, Agha is more his usual style: cheerful and funny as he defies his girl (played by a pretty Helen, who matches him when it comes to mischief and clowning around—just as he tries to shake a leg, too). A delightful little song set in a chawl, with all the neighbours looking on indulgently.

4. Jaaoon kahaan bata ae dil (Chhoti Bahen, 1959): Rehman. Like Balraj Sahni and Ashok Kumar, another of those actors who inexplicably have very few songs to their credit to which they’ve lip-synced. Compared to Mr Sahni and Mr Ganguly, Rehman of course acted the hero in far fewer films, but he’s played important roles in a lot of films, including roles (for example, in Jaanwar, Chaudhvin ka Chaand, Chhalia, etc) which one might have thought would have allowed scope for a song or two. But no; Rehman lip-syncs to precious few songs (Toot gaya haaye toot gaya from Maghroor is another I recall)—but more than that one, I like this classic sad song, for which Mukesh sings playback. Rehman, as the man who’s realized, a little late, that his jealous and conniving wife has caused his family to break apart, sings of his distress and angst at her betrayal.

5. Rakh lo khidmat mein (Rustom-e-Hind, 1965: Tuntun. Considering that probably the greatest classic comedienne of them all began her career as a playback singer—and a highly successful one at that—it seems odd that Tuntun has very few songs picturized on her. She does sing (and very beautifully, though without any instrumentation) Murli bairan bhayi in Solvaan Saal, but that seems to be about it. This song is an exception—and an insult (? In what condition was Tuntun’s voice by 1965?) to her, because while she’s lip-syncing to it onscreen, the female part of Rakh lo khidmat mein is sung not by Tuntun/Uma Devi, but by Minoo Purushottam.

6. Lapak-jhapak tu aa re badarwa (Boot Polish, 1954): David Abraham. Another well-known and very familiar face, yet precious few songs that he’s lip-synced to. Raj Kapoor’s Boot Polish, however, was a film that gave David several songs to ‘sing’ onscreen. This, a beautifully rendered classical-based song (sung by the master of classical music, Manna Dey) is the only one David’s character, John Chacha, gets to sing solo—to a bunch of fellow prisoners in the lockup. Lapak-jhapak tu aa re badarwa is an odd song, because the picturization, the situation, and part of the lyrics are supposed to be comical (I don’t find baldness especially funny), while the music, the singing, and some of the words are all pleasant, beautiful—and certainly not funny.

7. Ek chhoti si naukri ka talabgaar hoon main (Naukri, 1954): Iftekhar. Not quite as irrevocably slotted as the eternal policeman (not as much as Jagdish Raj, at least), Iftekhar did usually end up playing roles that required a certain gravitas. Policemen, of course; but also lawyers, doctors, army officers, priests—most of them men not inclined to do much singing (or have the time for it). In Naukri, however, one of his earlier films, Iftekhar played an unemployed man, who, along with Kishore Kumar, is staying in a boarding house and spending much of his free time trying to get a job. Here, while Kishore sings most of the song, Iftekhar joins him for a while in a light-hearted attempt at sending a message along with a job application.

8. Chunri sambhaal gori (Bahaaron ke Sapne, 1967): Anwar Hussain. While not anywhere in the same league as his vastly popular sister Nargis, Anwar Hussain was a familiar face through the 50s and 60s, and even throughout the 70s, having worked in hit films like Guide, Asli-Naqli, Humraaz, Raat aur Din, and so on. Rarely, though, did he get the chance to lip-sync to songs. But here he is, in a classic song from Nasir Husain’s most unusual film, Bahaaron ke Sapne. Interestingly, Rajendranath—another of those comedians who got to ‘sing’ quite a bit onscreen—is here, dancing along with Anwar Hussain, but it’s Hussain who actually ‘sings’ (in Manna Dey’s voice, for one of the singer’s best duets).

9. Nanhi kali sone chali (Sujata, 1959): Sulochana Latkar. Sulochana Latkar, besides working in Hindi cinema (and that too some of the biggest films from the 50s and 60s), also acted in Marathi films. She was by no means just the quintessential mother or middle-aged wife; she was probably almost as ubiquitous in a certain kind of role as were actresses like Leela Chitnis or Nirupa Roy. Surprisingly, then, she got little chance to ‘sing’ in Hindi films. This is one of the exceptions, and what a wonderful little song it is. A young mother lovingly pats her baby to sleep, singing a lullaby that also carries to the poor little low-caste orphan whom the family has willy-nilly taken under its wing. Soothing and lovely. 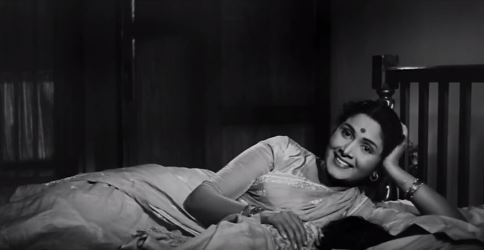 10. Chowpatty pe kal jo tujhse (Afsana, 1951): Jeevan. Of the top actors known for being slotted as villains, there are few who didn’t have songs picturized on them. Men like Ajit and Premnath, who started off as heroes before graduating to playing villains once they were past their prime, have umpteen songs to their credit from their heyday. Pran, the quintessential villain, had several songs picturized on him as a villain (think Aake seedhi lagi and Dil ki umangein hain jawaan), and many more—among them some landmark songs like Kasme vaade pyaar wafa—later in his career.

Not Jeevan, who while he played the villain in many, many films, is not one I remember as being the suave, song-singing type. Jeevan usually played the somewhat more ‘traditional’ villain: the greedy lala, the crooked munshi, the zamindar with the whip. Here, too, though he has his bodi firmly in place, he’s also dressed in suit and hat, and he’s singing a nutty song about how seeing a pretty girl on Chowpatty made him forget all about his paani-puri. What’s more, he’s dancing, and with none other than Cuckoo herself. A delightful song, and Jeevan shows a side of him rarely seen.

218 thoughts on “Ten of my favourite ‘Unusual Singer’ songs”