There’s a good reason why I’m reviewing this film today. Ideally, I should have reviewed it last week, on the hundredth anniversary of the Jallianwala Bagh Massacre, but since I didn’t want to publish two posts on consecutive days, I decided I’d let this wait for a week.

What connection is there between Elephant Boy and Jallianwala Bagh? Nothing, on the face of it, except perhaps the rather obvious Indian connection—since Elephant Boy was based on Rudyard Kipling’s Toomai of the Elephants (one of the chapters of The Jungle Book) and was shot extensively in India (it even marked the debut of possibly the most famous Indian export to Hollywood, Sabu—but that’s another story, which I’ll touch upon briefly near the end of this review).

No, what connects Elephant Boy to Jallianwala Bagh is that the man who tried to avenge Jallianwala Bagh acted in this film. Udham Singh, who killed the former Lieutenant Governor of Punjab, Michael O’Dwyer, the man who had ordered the massacre (which was carried out by Brigadier General Dyer), had worked at various jobs before he became an integral part of the story of India’s freedom movement. He had been a mechanic, and—briefly—an actor of bit parts, small roles of the blink-and-you’ll-miss-it type (more on the Udham Singh few know of, in this excellent article). Elephant Boy was one of the films in which Udham Singh appeared. Briefly, but still.

Elephant Boy, while it was not released in India, was a huge hit in the West. It made its leading man (boy?), Sabu, a hero pretty much overnight, leading to him eventually becoming almost a fixture in films requiring an Indian (or similar looking!) important character. Indians, Arabs, other Asian characters: Sabu played them all.

Here, Sabu, then about twelve years old, opens the film with a brief monologue in which he introduces himself. Little Toomai is his name, son of Big Toomai. They are mahouts, and have been so for generations.

Little Toomai’s best friend is the magnificent elephant, Kala Nag. The elephant and the boy sleep together out in the open; they wake up together, and go down to the river together, where Little Toomai gives Kala Nag a bath, making a point of scrubbing well behind the tusker’s ears. Little Toomai’s father, Big Toomai (WE Holloway) tells his son that their pachydermal pride and joy needs to be cleaned up well, because Petersen Sahib is coming to enlist elephants (and their mahouts) for a hunt. 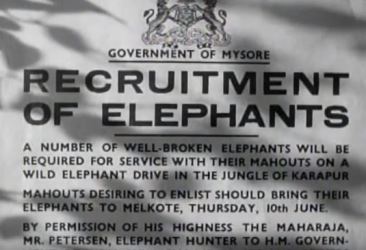 The hunt is not to kill animals, but to round them up. More precisely, wild elephants are to be captured so that they can be tamed and put to work. Little Toomai is very envious: he also wants to go. Why can’t he be a hunter, too? His father shuts him up and tells him he’s too young for all of that, and besides, they’re mahouts, not hunters.

In the meantime, Petersen (Walter Hudd) has been talking to his chief tracker, Machua Appa (Allan Jeayes) who has informed Petersen that the wild elephants seem to be drifting northwards. There are none now in the southern parts of the area. So Petersen gives orders for the hunting expedition to be organized for the north, and he himself goes off to appoint elephants for the expedition. 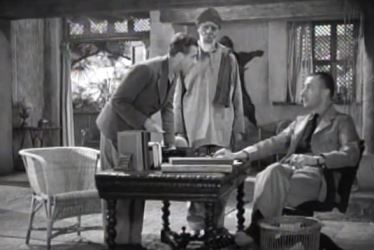 Among the elephants paraded before Petersen is Kala Nag, and the Englishman is immediately impressed. He is also amused, because along with Kala Nag is the precocious Little Toomai, whose antics (he has trained Kala Nag to lift him up with his trunk) are entertaining. Petersen jokingly asks Little Toomai if he uses this trick to steal green corn spread out to dry on rooftops, and the boy corrects him: no, melons.

Petersen is kindly disposed towards Little Toomai, and impressed too by the boy’s resourcefulness and air of self-confidence. So, when Little Toomai asks if he can come along too with Kala Nag and Big Toomai on the hunting expedition, Petersen agrees. 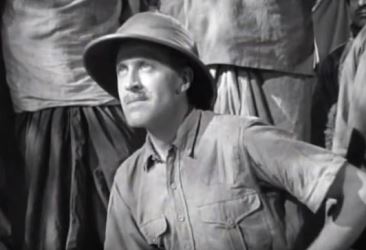 The entire contingent sets off northward, and an impressive sight it is, with dozens of trained elephants travelling steadily on through the countryside.

When they reach the northern jungles, Petersen gives orders for the stockade to be built. This is where the captured elephants will be herded in, so it has to be strong. The tame elephants, including Kala Nag (with Little Toomai seated atop him), get to work and we are treated to some impressive shots of massive building work in progress.

Little Toomai is soon popular with Petersen and Machua Appa. Not the other mahouts and trackers, though, most of whom regard Little Toomai as a precocious little upstart who thinks too much of himself. One evening, as the entire Indian population of the camp gathers around the campfire, Little Toomai again asks to be allowed to be a hunter—and finds himself being told that he may—once he’s seen the elephants dance!

The boy realizes he’s being made fun of and retires, hurt.

Meanwhile, Petersen is very dejected. They have spent six weeks in this area, the hunters and trackers have combed every inch of the forests around, and there’s no sign of the elephants they’ve come to hunt. This is a waste: of time, of effort, of government funds. They should give up and go back. Machua Appa, who hears him through, convinces Petersen that they should give it another month. One month, no more. They will find the elephants. 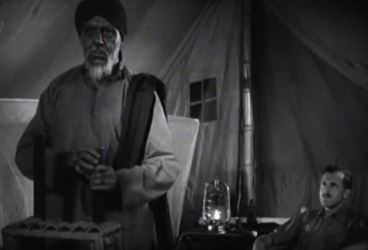 But before they find the elephants, catastrophe strikes. Because one night, Petersen is woken up in the middle of the night by Big Toomai. Big Toomai has news: there’s a tiger outside, prowling about near the stockade, right outside the camp. The mahout has only awoken Petersen and not the rest of the hunters and mahouts, because he does not want to cause a panic. Petersen, grabbing his gun, agrees that yes, that was the right thing to do.

The two of them go off, and Petersen manages to get close to the tiger. He shoots, the tiger falls, and an excited Big Toomai leaps forward—just as Petersen shouts out a warning, and the tiger (which isn’t dead) springs at the mahout. Petersen shoots again, this time killing the tiger, but the damage is already done: Big Toomai is dead. 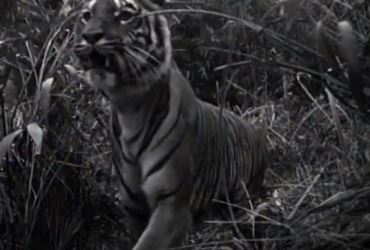 Little Toomai is heartbroken, of course, and so is Kala Nag. Big Toomai is ceremoniously cremated (this is where Udham Singh appears, as the Sikh priest who intones some prayers before letting Little Toomai take the torch and light his father’s funeral pyre–I found this a little odd, because I wouldn’t have thought Big Toomai was Sikh).

Anyhow, his father dead and gone, Little Toomai goes to Petersen with a request: to be granted charge of Kala Nag. Petersen, while sympathetic and understanding that now Little Toomai and Kala Nag only have each other, refuses. Little Toomai is just too little to handle a full-grown elephant on his own. No; Kala Nag will be given to Ram Lal (Bruce Gordon) to handle. Little Toomai panics: Ram Lal is a bad and vicious man. Please, not him! But Petersen does not believe Little Toomai. Ram Lal is a good man, a worthy mahout. He will look after Kala Nag well.

But Kala Nag, grieving for his master, has other ideas. He doesn’t like Ram Lal, who has put chains on Kala Nag, and who, when Kala Nag starts straining against his bonds, lashes out at the elephant with a handful of heavy iron chain. An enraged Kala Nag manages to free himself, and having thrown Ram Lal out of the way (injuring him in the process, breaking a leg etc) rushes off through the camp, leaving a trail of destruction and panic. 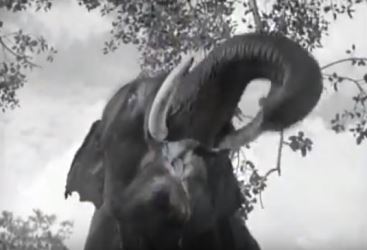 He is brought up short and soothed by Little Toomai, but the damage is already done. Soon, led by a self-pitying and furious Ram Lal, all the men in the camp—barring Machua Appa and Petersen, who don’t know yet what is brewing—are demanding that Kala Nag be shot.

Kipling’s Toomai of the Elephants is a short, magical little story about a little mahout boy and his relationship with his elephant. It’s mostly about Little Toomai and Kala Nag, with the climactic scene taking up a major chunk of the narrative. Elephant Boy takes the story and fleshes it out, introducing a larger cast of characters (there’s no Ram Lal in the original story), adding more human interaction, and introducing more conflict. It still fits together well as a compact, coherent story about man and elephant. Or, to be more precise, boy and elephant.

The elephants. I have a lot of respect and love for elephants, and seeing them all through this film was a delight. The scenes at the river, with the elephants bathing (and the tiny baby elephants tottering happily about their mothers—too cute!) especially got a thumbs-up from me. 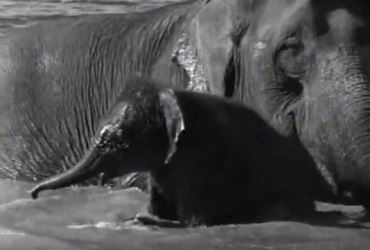 Sabu. Sabu Dastigar, as most sources seem to indicate was his full name, was a mahout who was noticed by Elephant Boy’s crew when they visited Mysore State (where the film was set and shot). The boy’s charisma and self-confidence (plus, naturally, his ease with elephants) impressed them so much that he was offered the role of Little Toomai—and the rest, as they say, is history. For someone who’s not a trained actor, Sabu is pretty convincing as an actor, especially when it comes to expressions. His diction is a bit lacking, since after all he hadn’t known English before he acted in Elephant Boy, but other than that, he’s good. And the very fact that he so happily and expertly fits in with the elephant—being picked up and placed on its head, riding it, playing with it, bathing it—makes him very believable: I doubt if anybody else who wasn’t already a trained mahout or elephant trainer would have been able to do that. 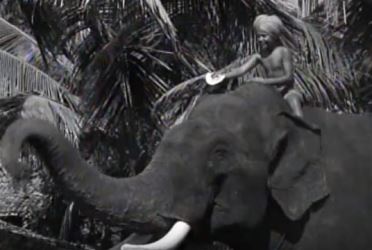 And, as I mentioned earlier, the story, which is a good one. Not quite just the Kipling story, but a good adaptation of it.

The round-up of the elephants. Yes, this was staged, and I bet all those elephants were trained ones, but still. The panic, the mad rushing about as they’re pushed towards the river and then into the stockade by beaters bearing flaming torches—I did not like that one bit. Perhaps no elephants were harmed in the making of this film, but there were plenty here, I can bet, that were very scared. The piteous squeaking of the little ones as they scurried about or got squeezed between older relatives was especially heartbreaking. Incidentally, this scene is missing from Kipling’s story, which is what makes it better than the film for me.

And, something very minor, but an irritant for an Indian viewer. I can understand why some of the major Indian characters—Big Toomai, Machua Appa, Ram Lal—were played by white actors in blackface. What I can’t understand is why none of them seemed to be able to get name pronunciations right, or at least consistent. Some pronounced Kala Nag perfectly (“Kah-lah nahg”), some didn’t (“kal-ah nag”) and Ram Lal’s name was distorted almost universally to “ram lal”, to rhyme with “damn pal”.

But, on the whole, a good film, an enchanting story and a fine debut for India’s first major Hollywood connection.