Love in Tokyo was before my time, but I can well imagine what its trailer should’ve been:

And so on and so forth. It probably would’ve mentioned a few other attractions: Pran as a lecherous villain (so what’s new?), Lalita Pawar as a tyrannical matriarch with a soft heart (ditto), surprise revelations, a gold digger without a conscience, and a comic side plot without a shred of sense in it.
In spite of all that lunacy, though, this is an entertaining film with a certain mad charm about it.

The film begins in Bombay, where the very wealthy Ashok (Joy Mukherji) is being forced into an engagement with the spoilt Sarita (Lata Bose). Ashok’s mother Gayatri Devi (Lalita Pawar), who’s the main instigator, is unaware that Sarita is after Ashok’s money. Ashok wriggles out of the engagement with the help of his madcap friend Mahesh (Mehmood) who cooks up a sudden emergency and takes Ashok off. 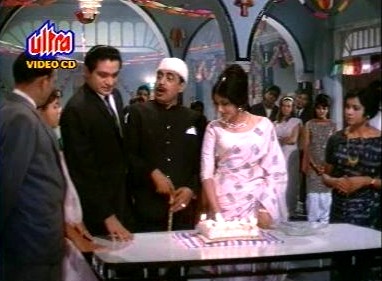 But Ashok’s troubles aren’t over. His elder brother, who’d gone off to Japan and married a Japanese woman—because of which Gayatri Devi disowned him—has since died, leaving behind a son. The little boy’s mother has also now died, and has left behind a sentimental note for Gayatri Devi, asking her to look after the little boy. Gayatri Devi therefore sends Ashok off to Tokyo to fetch the boy, Cheekoo (Master Shahid). 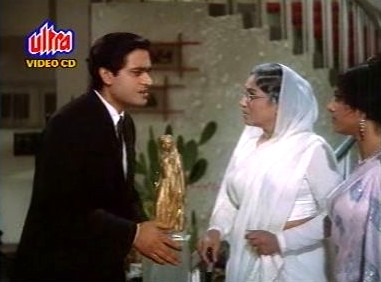 It’s not very clear who’s been looking after Cheekoo all this while, but Cheekoo very categorically refuses to go to India. Ashok tries bribery, cajoling, even bullying, but it doesn’t work. While Ashok is busy watching a dance performance on television—and falling for the gorgeous Indian dancer—Cheekoo sneaks off.

Cut to the dancer, an heiress called Asha (Asha Parekh). Asha’s only relative is her slimy uncle Madan (Madan Puri) who wants her to marry his equally slimy pal Pran (Pran), with whom Madan plans to split Asha’s millions. Asha loathes Pran, and when Madan insists she get engaged to Pran, she makes her escape. She and Cheekoo soon bump into each other and become friends. In the meantime, Madan has announced a reward of $5,000 for anybody who gets Asha back. 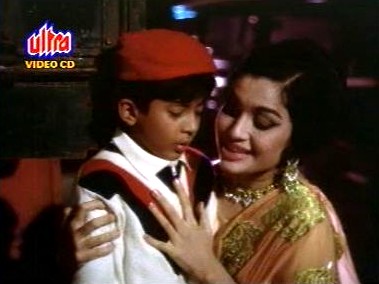 Ashok catches up with Cheekoo, but Asha helps Cheekoo `escape’, and then Cheekoo returns the favour when Pran tries to drag Asha off. At this point, Cheekoo suggests that Asha, in her sari, is bound to be recognised by people eager for the prize money. Smart kid, this one.
Asha and Cheekoo make their way to a shop that sells Indian goods. Its owner (Dhumal) is the father of Mahesh’s girlfriend, Sheila (Shubha Khote). It’s a small world, and chockfull of coincidences.

Asha disguises herself as a Sikh; they dress Cheekoo up as a little girl, and both get out of the shop without Sheila’s father realising. He recognises Asha and excitedly phones Pran for the reward, but ends up getting yelled at for his pains when Pran arrives to find only the shop assistant Mohan (Mohan Choti) gagged, tied and draped in Asha’s sari.

Asha and Cheekoo run into Ashok, who recognises Cheekoo and insists on taking him back to his hotel. Cheekoo kicks up a fuss and refuses to let go of his sardar friend, so Ashok asks the sardar to join them too. Ashok soon hits it off with Cheekoo’s mentor: the young sardar is a good sport.

Ashok confides in the sardar about the only girl to whom he’s ever felt attracted: a lovely Indian dancer he saw on television in Tokyo. Oh joy! Oh happy day! Asha is delighted to know her dreamboat also thinks she’s quite the ticket. The next step, therefore, is to reveal herself to Ashok. I’d have expected her to show herself off as Asha, but I guess I’m more logical than romantic. She chooses to pretend she’s Cheekoo’s aunt, and comes to have a quarrel with Ashok over Cheekoo’s guardianship. 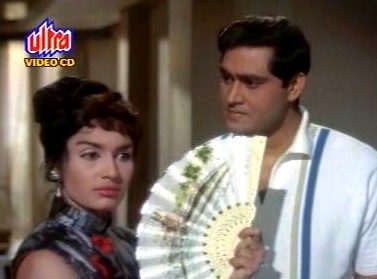 That evening, Ashok tells his sardar friend about the aunt who’s threatening to whisk Cheekoo off. The sardar’s solution to the problem is that Ashok should romance the aunt: softened up, she’s bound to relent and let Ashok keep Cheekoo. Ashok thinks it’s a grand idea. The next day, he goes to meet the aunt with a bunch of chrysanthemums in hand. Their romance develops swiftly, and by the time she’s singing Sayonara sayonara to him, Ashok’s smitten.

The sardar cuts his thumb while cutting an apple, and Ashok binds it up with his own handkerchief. The next day, meeting Cheekoo’s aunt, he sees his own handkerchief on her thumb, and Asha’s charade goes kaput. Ashok doesn’t confront her, of course (again a case of romance winning over logic) and pretends to have left for India never to return. Asha is heartbroken, but Ashok comes to console her—and win her back—with a lovely song: O mere shaahe khubaan o meri jaane jaana na. 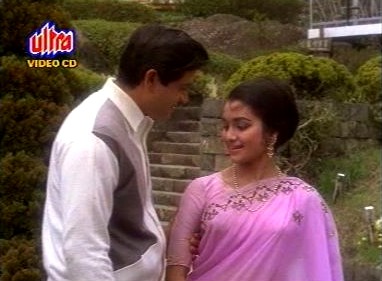 We now have a long and increasingly irritating interlude concerning Mahesh (who’s managed to wheedle Gayatri Devi into funding a Bombay-Tokyo ticket for him, ostensibly so he can find out how Ashok’s doing). Mahesh however comes to Tokyo to be with Sheila, whose father wants Sheila to marry Mr Chatterjee (Asit Sen). Much lunacy occurs, with Sheila’s father pursuing Mahesh through train stations, parks, a chemistry lab where Mahesh gets a flubber-like substance on his feet and jumps all across the Tokyo skies—and a geisha house where Mahesh passes himself off as an international geisha who speaks Hindi, Gujarati, Punjabi and Marathi.

Asha, now that she’s in love with Ashok, seems to think it’s safe to discard all disguises. Nobody seems to be keen on that $5,000 anyway. But Pran sees her and kidnaps her from virtually under Ashok’s nose. I do think Ashok needs his eyes checked, by the way: a man who couldn’t recognise his lady love through the flimsy disguises she wore certainly can’t claim 20/20 vision.
Pran and Madan imprison Asha in a house and try to bully her into marrying Pran. But Mahesh, Sheila, Cheekoo and Ashok rescue her and spirit her away. 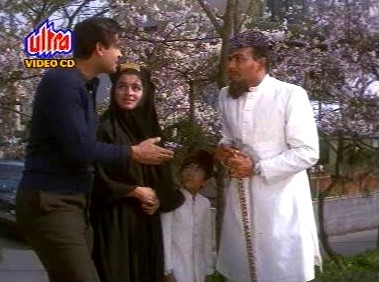 Mahesh (wearing a Mr Chatterjee mask and wig—when will the idiocy stop?!) marries Sheila, and true love, no matter how inane, triumphs. But Ashok and Asha have a bad blow in store for them: Gayatri Devi, concerned at Ashok’s delay in returning, arrives in Tokyo, accompanied by Ashok’s would-be fiancée Sarita and Sarita’s father. Gayatri Devi takes one look at Asha and dismisses her as a slut. Ashok tries arguing (and Cheekoo lets fly at Sarita’s father with his catapult), but to no avail.

Asha takes herself off to Hiroshima to utter some weepy remarks about how she wished she’d died too. Duh. Ashok finds her (okay, this guy may have weak eyesight, but he’s got sixth sense or something: how’d he know where she was?). He hears her singing O mere shaahe khubaan, and follows after her.

In his hurry to stop Asha, Ashok gets hit by a car. (Pran’s driving it, but nothing emerges from this particular fact, other than perhaps adding rash driving to the list of his vices).
In the hospital, Gayatri Devi is hollering unkindly at Asha and telling her to shove off, when the Indian surgeon Dr Roy (Tarun Bose) emerges from the operation theatre. (Hallelujah for Indian surgeons who just happen to be abroad! We couldn’t have trusted our hero to a Jap, could we?). The news is grim: Ashok will live, but he may well be blind for the rest of his life. 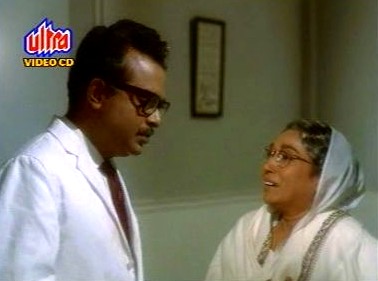 Ashok can see again if an eye transplant is done. Gayatri Devi offers her eyes but the doctor says she’s too old. Then Gayatri Devi has a brilliant idea: Sarita should donate her eyes; after all, Ashok is going to be her husband. Sarita, evil (and thankfully sensible) creature that she is, refuses. But there’s another who’s willing to give up her eyes for Ashok: Asha. True love, weepy and stoic, will survive even if it means going blind for the sake of the loved one… or will it? Will Ashok see again? Whom will he marry? What will happen to Cheekoo? And what’s happening on the Pran-Madan front?

If you can live through the moments (or let me amend that: minutes) of sheer lunacy, this is a good, old-fashioned masala film: everything’s there, and in ample doses.

What I liked about this film:
The songs. The music’s by Shankar-Jaikishan, and the score is among their best. The more popular songs aside, some of my favourite ones are the lovely Mujhe tum mil gaye humdum sahara ho toh aisa ho and the seductive Aa jaa re aa zara aa, Mohammad Rafi singing one of 60’s Bollywood’s few come-hither male songs. I like the picturisation of this song too: there’s something very sensual about it.

The Japanese gardens: I loved them in Aankhen, and I love them here. So very beautiful.
Asha Parekh. One of my all-time favourite actresses, and very lovely here. I can live without the weepy bits, but her feisty sardar and Cheekoo’s aunt avatars are delightful, and she is just so beautiful in a sari.

Joy Mukherji isn’t as good-looking as he was in Phir Wohi Dil Laya Hoon, but he’s attractive enough in some scenes.

What I didn’t like:
The comic side plot. So long-winded, so idiotic and such a waste of some good comic talent.
All those usual weaknesses exhibited by 60’s Bollywood films in a foreign setting: too many Indians scattered about; too many local people who know Hindi (or in this case, English, which I didn’t think rang true for Japan); and too many obviously Indian extras being passed off as foreigners.

Silly, really. And yet fun to watch, mainly because the serious bits are few and far between. This is a happy film, with lots of good songs, a lovely heroine, some nicely soppy romance, and no need for any brain power.