I first heard about this film when I was a child—The Magnificent Seven was being shown on TV, and one of my parents said it was based on Seven Samurai. End of story, for then.
I’ve grown up since. I’ve heard about the brilliance of Akira Kurosawa. And I’ve recently read that Shichi-nin No Samurai (Seven Samurai) was supposedly the first film ever to use the concept of a group of unconnected people being brought together for a common cause. It therefore seemed high time to finally see the film for myself.
Having just finished watching it, I’m still stunned. This is a mind-blowing film, colossal and profound, gut-wrenching and brooding and action-packed and funny and romantic and… Well, simply unforgettable.

The story begins in a remote village tucked away at the base of the mountains. The villagers are tilling their fields when a band of horsemen comes swooping in towards the village, sending its inhabitants screaming helplessly for cover. They escape by the skin of their teeth, though: the bandit chief realises that his band had raided this village recently, and the crops wouldn’t have had time to ripen since then. Energy spent looting this village is energy wasted. So they ride away, telling themselves they’ll be back once the barley has turned ripe. 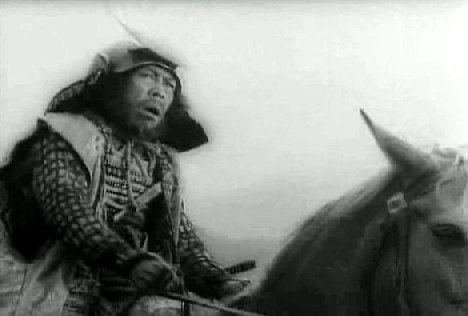 When the bandits have gone, the villagers emerge from wherever they’d sheltered and bemoan their fate. There is no one to turn to for help, and if things continue in this manner—with every harvest bringing in its wake the bandits—there’s not much point staying alive.
They’re at the end of their tethers when one voice of reason speaks up: they should go and seek counsel from the village elder Gisaku (Kokuten Kôdô), the universal ‘Granddad’. 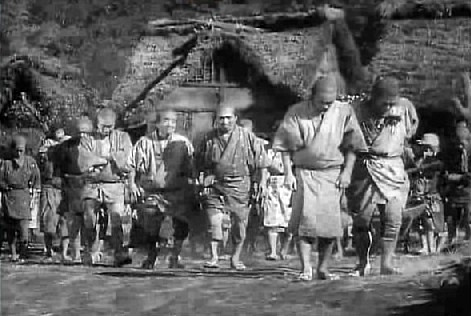 And Granddad has a solution to offer: hire defenders. Samurai. When the other villagers complain that the village has nothing to offer—not even proper food, since the villagers have been reduced to subsisting mainly on millet—and samurai are known to be very proud, Granddad has more words of wisdom: “Find hungry samurai.”

So a quartet of villagers, including the enterprising Rikichi (Yoshio Tsuchiya) and the timid, blubbering and eternally gloomy Yohei (Bokuzen Hidari), go off to town to see if they can find any hungry samurai who might be willing to come and save their village from the bandits.
Unluckily for the men, they end up facing polite refusal, ridicule (they don’t have anything to offer except rice? Hah!), and even blows.

They’re on the verge of giving up and returning to the village when they are accidental witnesses to the simple but startlingly effective rescue of a kidnapped child: an aging samurai, Shimada (Takashi Shimura), shaves off his hair, dons a priest’s robe and convinces the kidnapper he’s a benign priest come with food. With the kidnapper’s suspicions lulled, Shimada kills him in a swift, sudden attack, not just rescuing the child, but impressing Rikichi and Co. enough for them to approach him with their proposition. 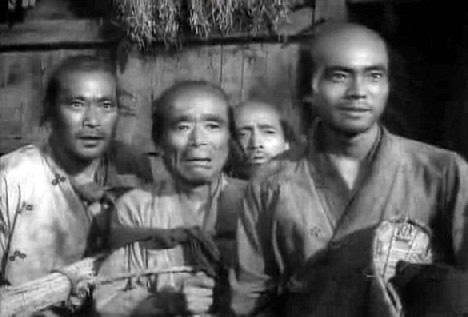 Shimada is initially dismissive, but when he realises the village is desperate enough to give up its last grains of rice to feed the samurai it will hire—it simply does not have the money to pay them—he acquiesces (in a fabulously poignant scene, where he holds up a bowl of rice and says “I won’t waste your food”).
Based on what Rikichi and the others have told him about the village, Shimada calculates that to be effective, they’ll need seven samurai, including him. 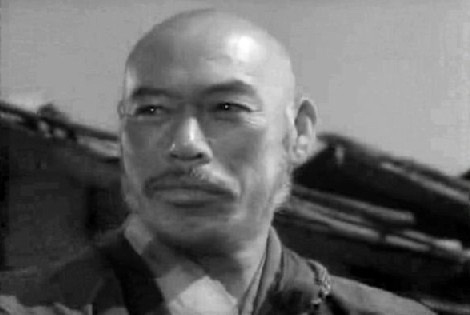 But hungry samurai are still scarce. And the two samurai whom Shimada has blundered into don’t look as if they’d suit his purpose. The first one is the very young and earnest Katsushirô Okamoto (Isao Kimura), who’d seen the rescue operation Shimada had mounted for the kidnapped child. Okamoto is deeply impressed and begs Shimada on his knees to take him as a disciple. Shimada refuses: this one, though he may come from a family of samurai, is no warrior yet. He’s just a child.

Then there’s the crude and utterly cocksure Kikuchiyo (Toshirô Mifune), who loudly asserts he’s a samurai—but whom Shimada regards with disbelief, before disregarding altogether. 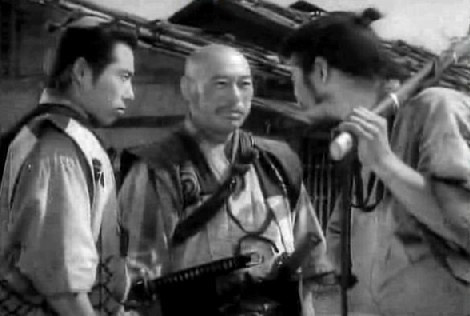 Meanwhile, Okamoto’s tenacity and general eagerness to please has made Shimada accept him as an informal apprentice of sorts. It is Okamoto’s task to carry out the preliminary test on each candidate they invite: to mount a surprise attack on the man by hitting him over the head with a stout stick—a good samurai, reasons Shimada, will be able to protect himself.
One such man, who becomes the second samurai to join the gang, is the cheerful Katayama (Yoshio Inaba), who enlists mainly because he finds Shimada intriguing, a man he’d like to know better. 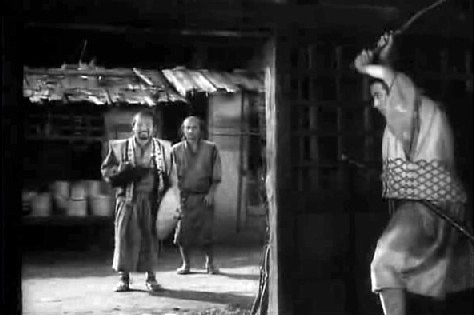 And Katayama, in his turn, finds them another: the witty Hayashida (Minoru Chiaki), whom he comes across chopping firewood for an innkeeper in exchange for a meal. Hayashida is just a second-rate fencer, but he’ll compensate by being good company.

One day a windfall comes their way: Shimada’s old right-hand man, Shichirôji (Daisuke Katô) turns up in town, and after a meeting with his ex-boss, agrees to join the group. 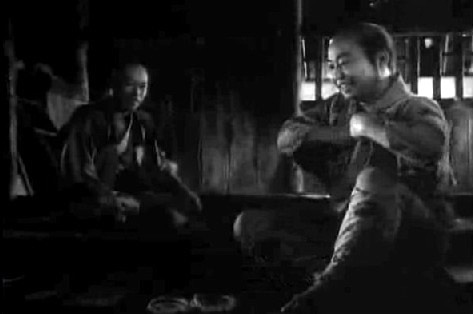 …as does the taciturn, somewhat reclusive and highly accomplished fencer Kyûzô (Seiji Miyaguchi), who had originally refused Shimada’s invitation but now joins.

Even counting the inexperienced Okamoto, they’re still only six men, and Shimada decides it’s time they set off for the village. On the night before they’re to leave, the boisterous Kikuchiyo shows up again, thoroughly drunk and armed with proof that he is a samurai, like he’d claimed: he’s come with a scroll of his family tree. Unfortunately, according to that,  Kikuchiyo should be 13 years old. He’s obviously a fraud.

But a small matter like being shoved out all over again isn’t going to dissuade Kikuchiyo (or whatever his real name is—we never learn that in the film). When the samurai set off for the village the next morning, he tails them, constantly on their heels. 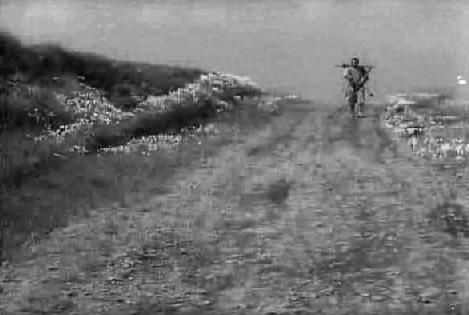 In the village, meanwhile, doubts are surfacing. The expected samurai will be dashing men, says one anxious father; they’ll seduce our daughters. One daughter, Shino (Keiko Tsushima) has already been forced by her father to cut off her hair and dress as a boy. Will the other women be safe (will Shino herself be safe?) from the charms of these worldly-wise warriors? Will other differences, too wide to be bridged, crop up between the poor peasants and the samurai? And what about the samurai themselves (not yet seven, mind you—just five, plus one persistent boor and one green lad)? Will they be able to save the village from the bandits?

At a whopping three and a half hours in length, Shichi-nin No Samurai takes its time to build up, but never with wasted scenes or dialogues—every minute contributes in some way to the overall fabric of the film. We see the distinctive character of each of the samurai emerging; we find relationships building up between the samurai, and (unlikely though it may appear at the start) between the samurai and the villagers. There are moments of hilarity, even sheer buffoonery, and moments of the deepest despair. There is sound military strategy and unsound, irrational passion. There is fear, hatred, and compassion; bitter memories and secrets too terrible to speak of. And there is the rapidly ripening barley in the fields…

Watch this. It’s a brilliant film, and never once during that three and a half hours did I find my interest flagging.

So, so much. The plot, the superb characterisation (of both samurai and villagers), the excellent use of silences or mere expressions instead of dialogue, the sound of rain and rippling water as music: everything.

But my favourite of all has to be Toshirô Mifune’s Kikuchiyo. This is a wonderfully etched character, at first glance uncouth and often clownish but nevertheless a powerful and skilled warrior. He struts around, leering at the village women; he roars with maniacal laughter and pulls tricks that amuse no-one. Yet, in a sudden decisive moment when the villagers’ attitude towards the samurai is sharply negative, it is Kikuchiyo who turns the tables. And when it is the turn of the samurai to view the villagers with hatred, it is Kikuchiyo who takes the part of the villagers. This man, enigmatic and multi-layered, is ever the one who straddles the boundary between good and bad, rich and poor, samurai and peasant: a memorable character, and superbly acted by Mifune. 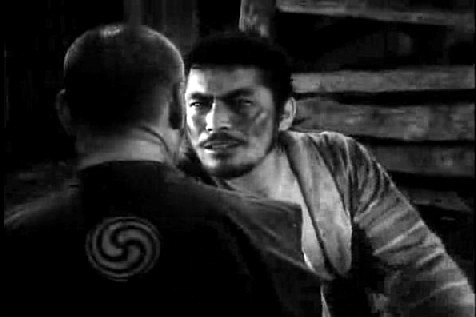 Nothing. Except perhaps what finally happened to my favourite, Kikuchiyo. I’d have liked the film to have ended a little differently for him.
But when I look at it from the point of view of art, I guess the end Kurosawa created was the best there was.