…with due apologies to Gerald Durrell.

Since my review of Aan consisted to a large extent of my family’s almost constant commentary on the film, I figured it was time to introduce you to them – and show you what we’re all about, especially when it comes to watching, appreciating, and mangling cinema.

This is an early shot of the Liddles: 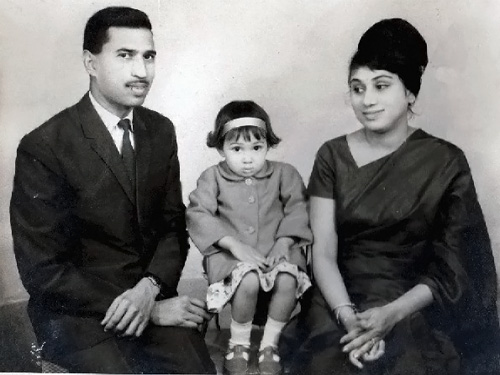 On the left, my father, Andrew Verity Liddle. On the right, my mother, Muriel (née Banerji). In the middle, looking terrified, my then 2 ½ year old sister, Swapna (this photo is from 1970). I was yet to appear on the scene.

Swapna was introduced, as I was, to Hindi films and Hindi film music at a young age. (Our parents, fortunately – unlike some of our ancestors – were liberal-minded enough to think of cinema as harmless entertainment, not the devil’s own creation). For Swapna, at least, Hindi film music seems to have been more of a draw than the films themselves. One of her earliest favourites was Bijli hoon main toh bijli, from Chanda aur Bijli (1969). These are the words of the chorus:

– which translates (roughly) as:

“I am lightning! Each time I go out,
Swaying my way around town,
I crackle my way through people’s hearts.”

“I am lightning! Each time I go out after eating a bun,
There’s a fish in people’s hearts
– the same fish that Baby (i.e, Swapna) ate!”

Hmm. One can see that food played an important part in this kid’s life.

Swapna wasn’t quite so food-obsessed by the time she grew fond of the songs of Aan Milo Sajna (1970). But she still got things a bit muddled: the line “Phir kab miloge?” (“When will I meet you next?”) from Achha toh hum chalte hain became “Phir kab hilogi?” (“When are you going to move off?”). In the same song, Swapna now admits that she did wonder why the two lovers wanted to climb up the curtains: “Aao paas baithein pardon par” (“Come, let’s sit together on the curtains”) was what she thought they sang. The actual lyrics are “Aao paas baithein pal do pal” (“Come, let’s sit together for a moment or two”).

On a similar note of popular film songs mangled beyond belief: there’s a cousin of mine, my Vijai bhaiya, who used to love Nana karte pyaar tumhi se kar baithe, from Jab Jab Phool Khile (1965). The original lyrics are meant to be “Na-na karte pyaar…” (“…despite having said no, and no again…”). Vijai bhaiya honestly thought the lyrics were “Nana karte pyaar” (“Granddad loves me…”), and used to sing it while snuggling up affectionately to his maternal grandfather, his nana.

While on the topic of Vijai bhaiya (and this is where I make my entrance): he was the one who first told me what The Sound of Music was all about. Vijai bhaiya is 11 years older than me, and my earliest memories of visiting him are from when he was in high school. My aunt, and my uncle – who was a Colonel – would be chatting with my parents, and my sister and I would be entertained by Vijai bhaiya. Invariably, his school notebooks used to be lying around, and drawn carefully in the margins would be dozens of detailed pictures – always of military tanks and guns. I guess it was not much of a surprise that Vijai bhaiya ended up in the army.

But: The Sound of Music. When I was about 13, and had still not seen The Sound of Music, Vijai bhaiya took it upon himself to tell me what it was all about. At the end of the narrative, I asked, “Oh, so it’s a war movie, is it?” After all, Vijai bhaiya’s story-telling had dwelt on the fact that WWII was the backdrop for the film, and that the Nazis’ pursuit of the Von Trapp family – and how they’re hoodwinked, with the help of the nuns – seemed to constitute the bulk of the film.

Vijai bhaiya conceded that it wasn’t strictly a war film, but it wasn’t until I’d actually seen The Sound of Music for myself that I realised how utterly varying individual perceptions of cinema can be.

Okay, so now that I’ve managed to wriggle myself into the storyline, perhaps it’s time to take over the story for a while.

The first film I saw was Bobby – my parents watched it in a cinema hall when I was about 1 ½ years old, and Mama took me along too, thinking I’d sleep through the film. I didn’t – I sat up and watched, not understanding a word, but loving it all. Later that year, Majboor was released – and though I didn’t watch it, one of my earliest favourites was a Majboor song I used to gleefully (and in complete innocence) render as “Michael Dadu peekar ganda karta hai” (“Granddad Michael makes a mess after drinking” – not, as Anand Bakshi meant, “…Michael creates a ruckus after drinking”). My vocabulary, unfortunately, hadn’t evolved to the stage of including words like daaru and danga.

…which, now that I think back on it, was probably just as well. A little mite like me shouldn’t have known words like that, my paternal grandma would’ve said in her stern voice. She was a fervently orthodox Pentecostal, and on one of her visits, was entertaining me by singing hymns. I bore it for a while, then piped up, “Dadi, aapko Julie picture ke gaane nahin aate hain?” (“Granny, don’t you know any songs from Julie?”)

My (and my sister’s) love for Hindi film music probably has something to do with the fact that my mum used to sing film songs to us as lullabies. She’s got a gorgeous voice – she used to sing in the church choir – and even today, despite touching 70, she’s got a voice that’s more controlled, beautiful and in tune than just about anybody else I know.

Anyway, Mama would pick up whichever baby daughter needed to be lulled to sleep, and she’d stroll about and sing. To my sister, she invariably sang O mere pyaar aaja (Bhoot Bungla, 1965). To me, she sang Yehi woh jagah hai (Yeh Raat Phir Na Aayegi, 1966). No wonder it’s still one of my favourite songs, ever. 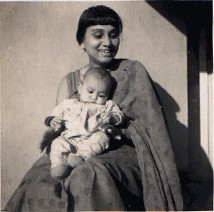 Mama, before she got married, didn’t get much chance to watch films. Her grandfather was a patriarch who believed in ruling his house with an iron hand, and cinema, in his opinion, was evil. Until he died in the late 1950s, he let his children and grandchildren watch only two films: The Ten Commandments (1956) and Quo Vadis (1951), both of which he deemed unlikely to be corrupting influences. Mama’s parents – and her uncle and aunt – were also allowed to see Kismet (1943), though since Mama was then only a year old, for her, it was as good as not watching it.

Ironic, then, that Mama should grow up to resemble a film star: Sadhana. Sometime in the early 60s, after they’d gotten engaged, Papa took this photograph of Mama’s:

One print of the photo Papa hung in his room, back home in Saharanpur. A visiting cousin, who’d never seen Mama, was taken aback. “I didn’t know you were such a fan of Sadhana’s,” he said to Papa. “I’m not,” Papa replied. “That’s my fiancée, not Sadhana.” 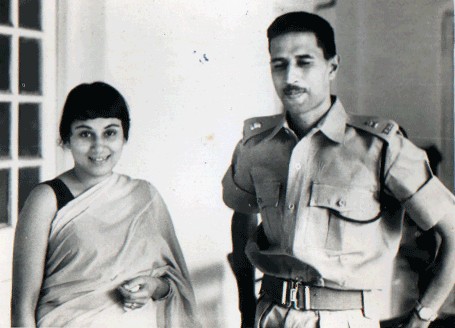 It wouldn’t have mattered, Mama says, if it hadn’t been for the neighbourhood boys. When Mama would walk down the street to go to college, they’d all hang about and yell after her: “Sadhana! Sadhana!” Thoroughly irritating, says Mama. (Sadhana’s photo on the left in this screen shot from Mera Saaya always makes me want to yell out: “Maaamaa!!”)

Then, in 1965, Aarzoo was released. My maternal grandmother decided, in a fit of magnanimity, to give two of her servants, the brothers Kaathik and Bahadur, a treat. (Bahadur, for those of you who read my post on Love in Tokyo, was the one who used to sing “Le gayi dil budhiya Japan ki” – “an old crone from Japan took my heart away” – instead of “Le gayi dil gudiya Japan ki” – “a Japanese doll took my heart away”).

Kaathik and his wife, along with the then-14 year old Bahadur, went off to watch Aarzoo. It was the first time they’d been inside a cinema hall. Everything was awesome, new, wonderfully strange. And then, when Sadhana came onscreen, Bahadur couldn’t believe his eyes.

“This country bumpkin!” Kaathik said scornfully when the trio got home later that evening. “He leapt up right there and began yelling, ‘Mirial Baba! Mirial Baba!‘ Everyone was looking at us and laughing! So embarrassing!”

Two more tiny film connections (and one biggie!), and this already over-long post will end. I promise.

One: my mother’s father, my nana, used to be a sound recordist with HMV in Lahore before the Partition. At the studios, he’d often see a struggling young singer who was trying to get a break.

The second story, not quite so brief. In the mid-1970s, Papa was posted in Rewa, Madhya Pradesh. My father was the Superintendent of Police (the SP) of Rewa, and the bungalow we lived in was an imposing one – it used to be once the house allotted to the Inspector General (IG) of Police. It had a long driveway, and one day Mama noticed a large car coming up the driveway. “I was puzzled,” she says. Not without reason; Rewa was (and still is) a small town, pretty much a lazy backwater. Big cars were unknown.

The car drew up at the front door, and from amongst the people seated, one man got out.

“It was Premnath,” Mama says. “He was wearing a gaudy multi-coloured bush-shirt. A multitude of chains and rudraksh malas dangled around his neck.” He smiled and told her that he’d stayed in this house, because his father used to be the IG at Rewa. “I just wanted to see the house once, for old times’ sake,” he told Mama. She invited him in to have a cup of tea, but he declined – he was off to the Kumbh Mela with some friends. “I wanted one glimpse of the house, that was all,” he said.

Ooh. Yes, I know he must have looked something like this by then: 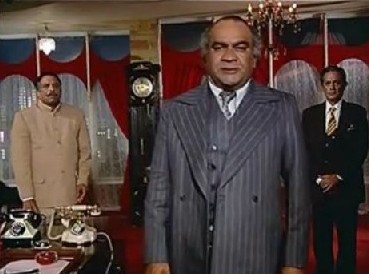 But still. My mum, being the dignified lady that she is, didn’t fall on him and beg for an autograph. I’m not sure if I would have acted with such restraint.

(My father says that Premnath’s father’s name was probably Diwan Mahendernath – Papa wasn’t sure. The house in Rewa, incidentally, was also the one in which Raj Kapoor got married).

And now for my BIG bit of news. I actually discovered this only less than a year ago. Not only have we lived in the house where Raj Kapoor got married, we’re actually connected – a long and very tenuous connection, but still – through marriage to Raj Kapoor. My paternal grandmother, my dadi, had a brother, who had two daughters. One of them, named Ivy, was married to Raj Kapoor’s (and most importantly for me, Shammi Kapoor’s!) cousin. Yahoo!

For now, that’s it. There are other stories, but they’re for later.

106 thoughts on “My Family and Other Film Fanatics”