Do you know what this is called? 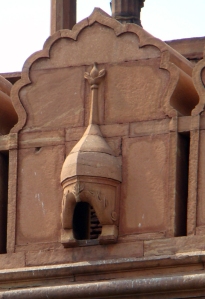 A damaaga at Red Fort

If you’ve been to Delhi’s Red Fort (or to some of the other Mughal-era forts, such as the fort at Agra), you might have seen this odd-looking architectural element, typically positioned high up on one of the outer walls of the fort.
Those familiar with history might know that the vertical slits in the walls are known as arrowslits or loopholes—because they allowed soldiers inside the fort to shoot arrows at an external enemy from the shelter of the wall.

This helmet-like structure, which is often seen alternating with arrowslits, also forms part of the defensive architecture of the fort. It’s known as a damaaga (a ‘damaaga’ is a ‘nostril’; the name is probably because of the similarity in shape). Damaagas were used as outlets to pour burning pitch on enemies trying to scale the wall.

Another feature of Mughal architecture directly related to defence are kanguras, or battlements. Kanguras were not a Mughal invention; they had been around for centuries in India before Babar arrived. In fact, kanguras—in the form of roughly triangular or rectangular shapes—can be seen crowning the walls of early medieval forts in Delhi, including Tughlaqabad.

Well before the Mughals took over, kanguras had become decorative elements of architecture. This is why rows of kanguras can be seen in buildings of a very varied nature, all the way from mosques to tombs, sarais, and (of course), forts and palaces.

Kanguras (battlements) atop the main gate of the Agra Fort.

Another architectural element that had been in use long before the Mughal period was the pishtaq, or niche. At its most basic, this is a quadrilateral shelf-like niche let into a wall. These started off (like the kanguras and damaagas) as a practical element of architecture: pishtaqs could be used as a shelf, to store items, and to hold lamps to illuminate a chamber. Unlike kanguras or damaagas, however, pishtaqs retained their functionality, especially as a receptacle for lamps.

This row of pishtaqs at the Red Fort are in front of the Rang Mahal.

In pre-Mughal Delhi, for example, pishtaqs were very common as a form of decoration in mosques (especially during the era of the Lodhi Sultans). 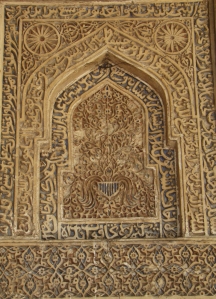 An example of a highly ornate pishtaq, from the Lodhi-era mosque at Bada Gumbad (Delhi).

One interesting example of pishtaqs fulfilling both functional and decorative roles is in garden pavilions. For example, at the Saawan and Bhaadon pavilions in the Hayat Baksh Bagh (at the Red Fort), a series of pishtaqs carved from white marble cover the front part of the platform. During the heyday of the Mughals, these niches used to hold silver vases filled with golden flowers during the day, and burning lamps at night: a pretty sight indeed.

In Delhi’s Hayat Baksh Bagh, a view of cusped arches and a chadar, at one of the garden pavilions.

Garden pavilions also often incorporated another important feature of Mughal architecture, the chadar. A chadar is a stone slope which acts as the bed for a water channel when it descends from a higher level to a lower one. The chadar is lightly carved with a pattern of shallow scallops or similar repetitive patterns. Water flowing over these ripples pleasingly.

A chadar – a carved slope for a water channel – at Red Fort.

Lastly, one architectural feature that is not just typically Mughal, but can actually be traced back quite specifically to Shahjahan’s reign. This is the ‘daantedaar mihrab’, also known as the denticular arch, the scalloped arch, or the cusped arch, because it consists of a series of semi-circular scallop-like cut-outs that form the inside of the arch.

An example of a cusped arch – at Safdarjang’s tomb.

Some believe that Shahjahan himself invented the daantedaar mihrab; at any rate, it is also commonly called a Shahjahani arch.

9 thoughts on “A quick lesson in Mughal architectural elements”