I came to know of Love in Bombay a few months back, when a newspaper article mentioned that Joy Mukherji’s sons were finally going to be releasing this film. I forgot about it until I discovered that it had finally been released this last Friday—and then I was in a quandary. To see or not to see, as I put it. Various friends urged me on: Harvey, for instance, said that with Agha Jani Kashmiri having revised the script, it may be pretty good. Beth said that she’d heard the costumes were good. Sidharth Bhatia suggested that the presence of Joy Mukherji and Kishore Kumar might be one reason to watch. 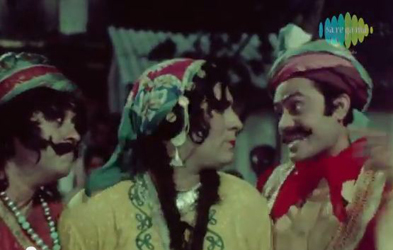 Harvey it was, however, who added the clincher: how often would I get to review a film after having watched it on the second day after its release? Considering my blog is confined to pre-70s films, that of course, would make this a once in a blue moon opportunity.

So I took the plunge.

Joy Mukherji had debuted (opposite also-debuting Sadhana) in Love in Simla (1960). Six years later, he had starred, opposite Asha Parekh this time, in the very popular Love in Tokyo. Love in Bombay, made in 1971 at a whopping cost of 30-35 lakhs (300-350 crores today), was to be the third in the series of ‘Love in—’ films. Produced and directed by Joy Mukherji himself, this one, however, didn’t see the light of day for over 4 decades—the expenses incurred in its making left Mukherji with no money to release the film.

It was only after Joy’s death last year that the negatives of the film were discovered in cold storage (Joy used to personally visit the cold storage every year to have the negatives cleaned)—and his sons decided it was time to finally release Love in Bombay. The film was digitally remastered, its scratchy sound and off-colour (literally!) sections cleaned up, and it was released in select PVR theatres on August 2.

A quick synopsis, now (and yes, this is going to be a shorter one than usual, because—since I watched this in a theatre and not on DVD/VCD— I don’t have as many screenshots as I usually would).

The story begins 50 miles outside Bombay, at sea off an island named Malvi. The unscrupulous captain (Kamal Kapoor) of a ship, along with his mate (Rajendra Nath) are watching a diver (Joy Mukherji) at work, and are very impressed with his skill. We soon realize that the captain and his man are up to no good—they want a good diver to haul up some smuggled, but sunk, gold for them. [Not, of course, so that they can hand over the gold to charity or the cops].

They manage to hoodwink the diver, Badal, into agreeing to work for them by telling him that it is a consignment of medicines—earmarked for 50,000 suffering patients—that has sunk. Badal is a brawny but not especially brainy villager who doesn’t think to ask why seawater wouldn’t have put paid to the medicine, and agrees to help in this noble endeavour. Along with his horse Cheeta (billed as ‘Wonder Horse Joker’), he boards the ship…

…and meets the other main passengers. These consist of the very wealthy Mr Mehra (Rehman); Mr Mehra’s spoilt daughter Preeti (Waheeda Rehman), and Preeti’s lecherous suitor Roshan (Narendra Nath), whom Preeti dislikes but Mr Mehra is rooting for, because Roshan is the son of his old friend (Bipin Gupta). 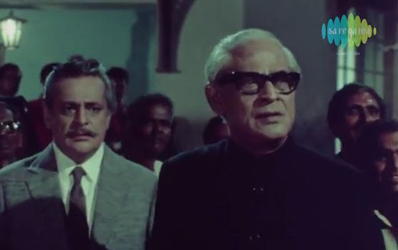 Before long [since Preeti is pampered silly, and Badal is arrogant to the point of sheer boorish], there’s a huge quarrel between all of these people. Fists fly, blood is spilt, and Badal ends up being tied to a mast. Which is where he is when a terrible storm hits the ship and wrecks it.

Badal, being the hero, is able to untie himself from the mast and rescue Preeti, who is on the verge of drowning. This, despite the fact that Preeti, by her own admission, had “dealt him a hundred slaps”.

This is enough to make Preeti suitably grateful (though she doesn’t fall in love with Badal yet). They wash up on an island and are reunited with Mr Mehra, Roshan, Cheeta, and the rest of the ship’s crew, and are immediately assaulted by a bunch of warriors, all in crimson grass skirts and plastered with warpaint.
The captain and his mate are killed (short roles, those, for Kamal Kapoor and Rajendra Nath), Roshan manages to escape with an unconscious Mr Mehra, and Preeti is carried off by the savages…

…who put her in a red grass dress, festooned with plastic flowers, and make her the centerpiece of their party that night.

Badal, who’s been hovering around, rescues her with the help of Cheeta. They escape to  a nearby island, where love blossoms [along with more artificial flowers—again, on Preeti’s outfit, which seems to be made of strips of green plastic decorated with yellow]. By the time Roshan and Mr Mehra turn up, searching for Preeti, she and Badal are deeply in love. This irks Daddy and Beau enough to make them thrash Badal and leave him for dead, before taking Preeti away with them.

It is at this moment that the action finally moves to Bombay, where we are introduced—by himself—to a madaari named Ganpat Rao (Kishore Kumar). Ganpat Rao has a dancing bear named Birju [who, occasionally played by what looks like a man in a bear suit, even swings a mean fist, clobbers goons, and dances], and a pretty girlfriend named Motia (Sonia Sahni).

One evening, when Ganpat Rao gets into a brawl and is heavily outnumbered, he is helped out by a stranger. This is Badal, who has been picked up from that island by a passing ship and has now arrived in Bombay. He confides in his new friends, and goes off to meet Mr Mehra to ask him for Preeti’s hand. [Cheeta is the one who discovers where the Mehras live. Truly a wonder horse].

Sadly for Badal, his hopes of winning Mr Mehra over are dashed; Preeti’s father tells him in no uncertain terms that he isn’t going to let his daughter marry a no-account who doesn’t even have a naya paisa to his name.

Badal, being Badal, doesn’t plead or beg; he tries bluster, and it finally works. Mr Mehra agrees that, if Badal can show himself capable of earning money, he will let Preeti marry him. A time and a sum are set: if Badal can earn Rs 5 lakhs within the next 3 months, Mr Mehra will back down and give his blessings.

Which is what the rest of the film is about. With Ganpat Rao, Motia, Preeti (and a friend of hers), Birju, Cheeta (and Cheeta’s new girlfriend, a mare named Sharbatia) on his side, Badal sets about trying to get 5 lakhs. Will he manage? After all, ranged against him are Roshan and his goons, as well as Sharbatia’s cantankerous owner, a tonga-waali (TunTun) who also happens to be Motia’s mum. The odds are stacked, and the chances of success very slim indeed.

The poster. (So vivid and colourful and utterly attractive, even if Waheeda Rehman ends up looking more like Babita than herself).

Kishore Kumar. OTT and in a very bad wig, but fun, all the same. And he gets to sing some really nutty songs.

The songs, by Shankar Jaikishan. These aren’t the best works in their repertoire, but some of the songs—Na main boli na woh bola, Saiyyaan saiyyaan, and Maazaa naav ahe Ganpat Rao—are pretty catchy.

It’s not as if Love in Bombay is downright bad (I’m saying this because I’ve seen films like Bhabhi, Parivar, and Suhaagan, which take ‘bad’ to a completely different level—a combination of tedious, unbeatably melodramatic, and just pure shudder-worthy). Love in Bombay, while the core story is all right (if predictable), fails mainly because it’s executed badly.

For one, the film is loud (literally so, too—there are long sections where people scream and laugh maniacally for no good reason; in fact, many of the songs are also punctuated by frequent screams). There are scenes that consist almost entirely of people slapping each other, or hitting each other with a rod. And not because they’re in a life-or-death struggle, but simply because nobody seems to have taught them a civilized way of expressing differences.

Also, despite the fact that the cast is so mouthwatering, they are mostly wasted here. Waheeda Rehman, for instance: why cast an actress capable of so much more, in a role that requires her to only screech, slap, and (occasionally) prance about a bit? (Plus, her chemistry with Joy Mukherji is pretty much nil—not that they get a chance to display much chemistry, though, since most of their scenes consist of them fighting with each other). 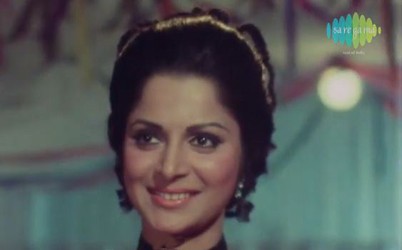 This brings me to what is probably my main grouse with this film. When I watch a Joy Mukherji film, I’m looking for something entertaining and enjoyable, with lovely songs, make-me-melt romance (as in Love in Tokyo), and lots of eye candy. This film, unlike favourites such as Love in Tokyo, Phir Wohi Dil Laaya Hoon, and Ek Musaafir Ek Haseena, has little to recommend it: Joy looks definitely over the hill; the songs are mostly forgettable; and the film is screechy and consists mostly of slapstick.

Recommended? Only if you want to see every Joy Mukherji film out there.