The Indira Gandhi National Centre for the Arts (IGNCA) at New Delhi is currently hosting—since November 21st, 2013, up to December 31st, 2013—an exhibition titled ‘The Mughals: Life, Art and Culture’. I’d read a notice about this in the newspapers a month back, and had mentally billed it as something I wanted to see, especially since it was mentioned that the exhibition was in collaboration with the British Library. 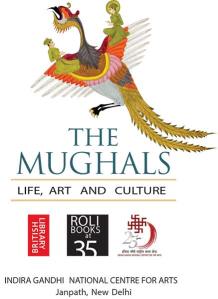 What with various other things to attend to, I finally ended up visiting the IGNCA only this weekend. The exhibition, a much larger collection than I’d expected, turned out to be not just interesting, but much more: immensely absorbing, very colourful, and showcasing aspects of the Mughals that aren’t too well-known. (And that, coming from someone who spends a lot of her time doing research on obscure facets of life in Mughal times, is saying a lot).

The exhibition spreads across two large spaces, the Twin Galleries at the CV Mess. As you enter, the gallery on the left (the larger one) begins with a history of the Mughals, in chronological order. This extends into the second gallery and is limited to not just to a political history of the 16th through to the 19th centuries, but also glimpses of religion, society, culture, literature—just about every facet of life.

Portraits of the ‘Great Mughals’, at the entrance to the exhibition.

Probably the most eye-catching are the Mughal miniatures: there’s everything here from portraits of the emperors (including a very famous one of Aurangzeb in his old age), to portraits of other members of the royal family (of particular mention: three pages from the famous Dara Shukoh album, including portraits of Dara, his wife Nadira Banu Begum, and the dedication page of the album, lovingly penned from Dara to Nadira). 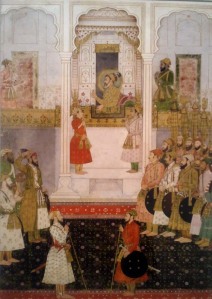 Aurangzeb reports to Shahjahan in the durbar.

There are paintings of hunts, battles (a highly detailed one of the Battle of Panipat, for example), festivities (a nobleman celebrating Holi), common people (a village scene in Kashmir, a scene of Haryana’s Raniya village, a riverside scene in Bengal). A shepherd offers a flower to a pot-bellied, skinny-limbed holy man in one image; in another, a party of ‘kanphat’ yogis, their ears pierced to accommodate heavy earrings, gathers. In another, rather more risqué one, the Emperor Mohammad Shah ‘Rangeela’ makes love to a woman.

A painting from the collection: a party of kanphat yogis.

Another interesting angle on paintings is the literary one. Since books at the time were often illustrated, there’s a wealth of exquisite excerpts from manuscripts here. Some are classics, very well-known and well-loved works from Mughal libraries: Sa’adi’s ‘Bostan’ and ‘Golestan’, the ‘Hamzanama’, the ‘Baadshahnama’, ‘Akbarnama’, ‘Jahangirnama’, and ‘Baburnama’, and some gorgeously painted, gold leaf-embellished sections of the Quran.

A copy of the Quran, dating back to the 16th century, at the exhibition.

Alongside these more familiar works are pages, beautiful calligraphy alongside meticulously painted images, from more obscure works: a manual on horses; a guide to archery; romances, and more.

Besides these, there are documents, many of them utterly priceless and unique. There is on display, for example, what may be the oldest Mughal document in existence: the land grant given to Babur. There are excerpts from Thomas Roe’s journal from when he visited the court of Jahangir; crop revenue tables for Agra from Akbar’s period; farmaans, marriage contracts, letters (including one by Mirza Ghalib), astrological charts, atlases, maps—including a long scroll detailing the route from Delhi to Qandahar—and recipe books.

The only known photo of the last Mughal emperor, Bahadur Shah ‘Zafar’

Intrigued? Excited? Please be. And please go! This is a delightful, informative, and very good exhibition, and there’s still more than a week to go before it winds up. Visit while it’s around—you won’t regret it.

Note: The Mughals: Life, Art and Culture exhibition is a collaborative effort between the British Library, the IGNCA, and Roli Books (who have published a catalogue of the exhibition, on sale at the venue along with various Mughal-related books published by Roli). The exhibits aren’t originals—they’re reproductions, but so well executed that you wouldn’t know the difference, except in cases like the scrolls.

The exhibition is open daily from 10.30 AM to 7 PM. There are no entry charges, and photography is allowed.

2 thoughts on “The Mughals: Life, Art and Culture Exhibition at the IGNCA”