Here’s wishing all of you a very happy Christmas, and much joy, good health, and prosperity over the year to come. 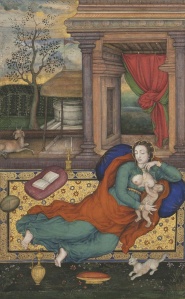 Painted by Akbar’s court painter Basawan, this Madonna and Child is from the Jahangir album.

And, just in case you were wondering: this painting is a Mughal one. It’s by the very accomplished Basawan (who is believed to have been active between CE 1580 and 1600). Basawan was a court painter for Akbar, and continued to work during Jahangir’s reign.

This painting, of the Madonna and Child, was part of the Jahangir album. It is an interesting hybrid of Mughal miniature and European art. The pavilion depicted is very Mughal in style, as is the gold-patterned carpet on which Mary and Jesus lie. The clothing and curtains, richly textured and unpatterned, are very similar, however, to those seen in medieval European art. Other little details, like the candlestand, also indicate the influence of European art.

Basawan was one of the first painters of the Mughal court to be influenced by European art; in later years, more of this influence was to be seen in Mughal art. Christian-themed paintings, like one of Jesus being presented at the Temple, or the visit of Elizabeth and John to Mary and Jesus, were among the most prominent examples. Here, from the collection at Delhi’s National Museum, is another example of the ‘Madonna and Child’ theme. This painting is from the late 18th century, during the reign of Mohammad Shah ‘Rangeela’.

An 18th century Mughal miniature, from during the reign of Mohammad Shah ‘Rangeela’, of the Madonna and Child.