Sadly, the only thing I knew about Hyderabad’s Mecca Masjid, before I began researching the city to create our itinerary, was that it was the scene of a brutal terrorist attack in 2007. Someone mentioned to us that, in the wake of the bombing, the mosque had been shut for visitors. It’s open now, though, said someone else. And, since it’s right next door to the Charminar (the implication being that the Charminar cannot possibly not be on your itinerary!)—and it’s a very historic mosque—it’s worth checking it out. 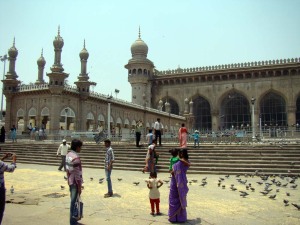 The Mecca Masjid, seen from the road.

The Mecca (pronounced ‘Makkaah’) Masjid was built by the same man who built the Charminar, Mohammad Quli Qutb Shah, the fifth Sultan of the Qutb Shahi dynasty. He also laid the foundation stone of the mosque with his own hands.  The Mecca Masjid, being no small structure (it’s one of the largest mosques in India) took 60 years to build, and its construction was finally completed under the aegis of the Mughal Aurangzeb after his conquest of Hyderabad.

Having already had a bird’s eye view of the Mecca Masjid from the balcony of the nearby Charminar, we walked down to the mosque—a short but busy stretch of road lined with vendors’ carts selling everything from fruit to handkerchiefs. Because this was noon on a summer afternoon, the vast sehan (the courtyard) of the mosque was pretty much deserted. Walking past the railing which separates the sehan from the road, we arrived at a gate where we had to remove our shoes (these are looked after by a caretaker for Rs 10 per lot of shoes). 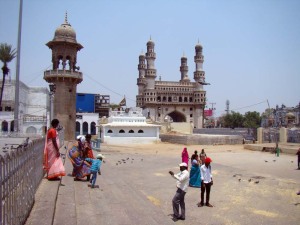 Outside the Mecca Masjid: a family gets photographed against a backdrop of the Charminar.

Stepping through the gate, still a little dazed from the hot sun, we were immediately taken under the wing of a sort of self-appointed guide who’d obviously identified us straightaway as tourists, and that too tourists whom he could probably get money from. Since there’s precious little in the way of signage to explain what the Mecca Masjid is all about, this was—in hindsight—not too bad an option.

From the gate to the main prayer hall of the mosque (and perpendicular to the prayer hall) stretches an unusual graveyard: a long, broad platform of white marble, with a row of tombstones. These are of the Nizams of Hyderabad (the Asafjahi dynasty) and their families. Our ‘guide’ named a few of them, each tombstone intricately carved from white marble, resting on a base of black granite. This long graveyard is completely covered, so it had been taken over by a motley crowd, all resting here: men stretched out on the cool marble, fast asleep; burqa-clad or sari-draped women chatting in small groups; children running about between the gravestones. All somewhat macabre.

The graves of the Asafjahi Nizams, at the Mecca Masjid.

We walked through this area, up to the prayer hall. A five-arched façade with minarets at either end, this is most notable for the fact that the red tiles under the chhajja (the dripstone, or overhang, protruding above the columns) of the large central arch actually do owe their provenance to Mecca. Our ‘guide’ told us that Aurangzeb had had these tiles especially imported from Mecca to be placed here. The truth is that Mohammad Quli Qutb Shah himself commissioned the making of these tiles—made from soil brought from Mecca. 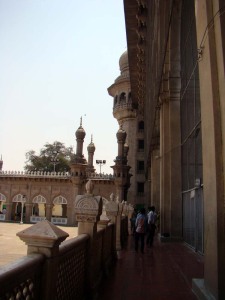 Looking up towards the central arch of the Mecca Masjid, decorated with bricks of soil brought from Mecca.

Also of interest here are the tall stone columns that hold up the high ceiling of the mosque (some of them are carved from a single block of granite), the chandeliers (according to our guide, of Belgian glass, though since they were draped in shapeless khaki sacks, we couldn’t appreciate them), and a bench of black stone (sang-e-musa, as it’s known) that sits in the sehan, close to the prayer hall. “It’s said that if you sit on the bench, you will return to Hyderabad,” said our guide. We do have a lot to see yet in Hyderabad, but racing across a burning hot stone courtyard just to sit on a bench—no, not quite our thing.

The sehan of the Mecca Masjid. The sang-e-musa bench can be seen on the left.

A high metal railing separates the prayer hall from the area outside. We were told that I would have to keep myself entertained, since women aren’t allowed into the prayer hall; my husband, however, was accompanied inside. (It later transpired that all and sundry, even when male, aren’t allowed in; this was merely a ploy to get my husband to donate some money because he’d been ‘favoured’ thus). My husband went in—not yet aware that he’d have to shell out money for the privilege—and emerged a few minutes later, having paid off our guide and the man in charge of the donations box.

In the prayer hall at the Mecca Masjid.

The Mecca Masjid isn’t one of the most exquisite or impressive mosques I’ve seen (Srinagar’s Shah-e-Hamdan and Jama Masjid and Delhi’s Jama Masjid might qualify for that title). It is, however, very historic, and it’s certainly one of Hyderabad’s better sights. Best of all, it takes little time to see, and other than the Rs 10 you’ll pay the caretaker who looks after your shoes, you actually don’t need to necessarily pay anything else.

The Mecca Masjid is open all days of the week, though Fridays are (obviously) reserved for namaaz.  Please go suitably clad; women must cover their heads at all times in the premises.

To read about the other sights we visited on our tour of Hyderabad, click these links: