When I posted my review of Pakeezah last week, I mentioned that I’d be posting something further about Pakeezah. This is it, and the reason why I rewatched Pakeezah in the first place: I wanted to see, once again, the nuances of the film, before I got around to reading Meghnad Desai’s Pakeezah: An Ode to a Bygone World (Harper Collins; 2013; ISBN: 978-93-5029-369-0; 152 pages; Rs 250).

To start with, I must confess that I haven’t read any of the academic works written about Pakeezah (which, seems to be a favourite with writers on cinema, both Indian as well as Western). For me, watching Pakeezah again, and this time with a view to seeing it for more than just entertainment, made me think of things that I had either not noticed before, or had simply forgotten over the years. With Pakeezah now fresh in my mind, I got down to reading Desai’s book on the film.

Pakeezah: An Ode to a Bygone World is aptly named, since, by the time Pakeezah was released in 1972 (after having been in the process of being created since about 1957), Hindi cinema—and India itself—had moved on. Desai mentions the films and the tropes that had come to dominate Hindi films by the 70s: Sholay, the angry young man, etc. Pakeezah, a Muslim social that unmistakably belongs in the era of Chaudhvin ka Chaand, Mere Mehboob, and Barsaat ki Raat, shared little in common with other films released around the same time: definitely a harking back to an era that was already half-forgotten. 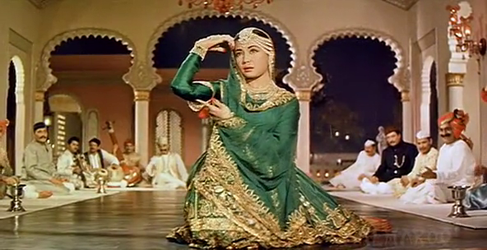 Desai’s book begins with a brief prologue (which I found rather rambling in its meandering through everything from Andaz and Mughal–e-Azam to Sholay and the TV series Ramayana and Mahabharat in its attempt to list cinematic works that endure and those that do not—the point being that Pakeezah is one of the former).

This is followed by eight chapters:

The Story (a literally scene-by-scene synopsis of Pakeezah);
The Origins (how Meena Kumari and Kamal Amrohi came together—both personally and professionally, and how this partnership resulted in Pakeezah)
The Making, 1957–1971 (as its name indicates, how the film was actually made: from the initial cast and crew to the way the story evolved over the years)
The Rewriting (going deeper into the way the story changed over the 14 years Pakeezah was in the making, including Meghnad Desai’s own interpretation of what may have prompted Kamal Amrohi to make these changes)
Pakeezah: The Many Themes (discussing the tropes and cinematic themes that find expression in Pakeezah, such as the Muslim social; the women’s film; the reluctant tawaif; and so on)
The Man Behind Pakeezah: Kamal Amrohi (about Kamal Amrohi, his background, how he came into the film industry, and his films—in particular, the classic Mahal)
The Stars (brief biographies of the leading lights of Pakeezah’s cast: Meena Kumari, Raj Kumar, Ashok Kumar, Veena, Nadira and Vijaylakshmi, along with brief introductions to the character each of these people plays in Pakeezah)
The Music (about Ghulam Mohammad—who composed the music for Pakeezah; touching very briefly upon Naushad, who helped him, and later provided the background score for the film; and the lyricists—Majrooh Sultanpuri, Kaif Bhopali and Kaifi Azmi, who wrote the songs, along with Kamal Amrohi himself).

For me, the main irritant in this book was the repetition of the storyline. Of course, while discussing a film, one is compelled to provide at least a brief outline of the plot, an aim achieved adequately by the first chapter, The Story. Unfortunately, large sections of the stories—including entire scenes—are repeated all over again here and there, at times with little reason for the mention of the scene to be so detailed.

Along with the repetition of certain scenes, there are repetitions of certain interpretations that Desai makes. As an example, there’s the climactic Aaj hum apni duaaon ka asar dekhenge, when Sahibjaan’s anguished mujra culminates in her cutting her feet on the glass of a chandelier she’s broken, and dancing on, getting her feet bloody—the very same feet that Salim had begged her not to lower to the ground, for fear of them getting sullied. It’s a striking, ironic link to that first time Salim saw Sahibjaan; but it hardly needs repetition to drive the message home. Once, possibly, if one wants to draw more attention to the symbolism of that scene. But repeated twice after the first mention? Not needed. 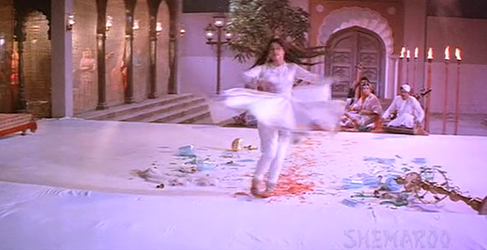 There are other aspects of the book that seem to indicate a lack of clarity at times. At a basic level, the language is, now and then, a little vague: “We next see Shahbuddin… But he now knows he has a daughter. He goes to Nargis’s grave where the woman tells him her aunt has taken her away.” (Considering there are four females being mentioned in this little paragraph—Nargis, Nargis’s sister Nawabjaan, Nargis’s baby daughter Sahibjaan and the woman at the graveyard—the ‘her’ in the last sentence can be confusing if you haven’t seen the film, or aren’t really paying attention).

Majrooh Sultanpuri, too, is credited with having written Inhi logon ne (the earliest occurrence of this song I’ve come across is from the film Himmat, 1941, in which it was sung by Shamshad Begum; two years later, in Aarzoo, the same song was picturised on Yaqub. Majrooh Sultanpuri didn’t debut in the Hindi film industry till Shahjehan, 1946).

Against that are the interesting snippets of information, the anecdotes about Pakeezah, which are contained in two main chapters: The Making, 1957-1971 and The Man Behind Pakeezah: Kamal Amrohi. For me, these were the best part of the book: things I learnt that I hadn’t known before, like Amrohi’s almost obsessive perfectionism (he had borrowed, from MGM, Cinemascope lenses to film Pakeezah. During shooting, Amrohi complained to MGM that the lenses were slightly unfocussed. Lengthy altercations resulted, with Amrohi insisting that the lenses did malfunction, while MGM defended their lenses. The impasse was brought to an end when the lenses were finally tested at a Hollywood lab—and were found to be out of focus by 1/1000 mm). Similarly, the scene showing the barge floating down the river against a backdrop of a sunset took over a week to film, because Amrohi just wasn’t satisfied with the sunsets till then. There are other interesting anecdotes along these lines, and background information—like that of how the film’s story and cast changed over the 14-odd years Pakeezah was in the making.

That is the main reason I would suggest reading this book: to read about how Pakeezah was made. If you’re a trivia hound (like me), you probably already know that Padma Khanna was Meena Kumari’s dancing double for Aaj hum apni duaaon ka asar dekhenge. But do you know who was first slotted to play the hero opposite Meena Kumari? Do you know how much the set of the Bazaar-e-Husn (which is where Sahibjaan lives with Nawabjaan initially) cost—and what flaw Kamal Amrohi discovered in it?

If that intrigues you, look out for this book. However, if you’re looking for deep insights into what Pakeezah stands for, what it arose from, its symbolism and any deeper meaning, you may well be disappointed. Desai does talk about the many themes of the film—the tawaif, the woman, the patriarchal society, the ‘Lucknow of imagination’, the very epitome of tehzeeb, and so on—but to no great extent. (I have to admit: when I finished reading this book, I thought some of the people who’d commented on my review of the film had offered more insights into it than I’d gleaned from the book).

Recommended? Yes, if you like trivia (and some gossip about Meena Kumari’s and Kamal Amrohi’s personal lives). No, if you’re keen on insights and deeper meaning.

18 thoughts on “Book Review: Meghnad Desai’s ‘Pakeezah: An Ode to a Bygone World’”