One of my favourite places to eat—irrespective of cuisine—in Delhi is the fabulous Yum Yum Tree. My husband and I discovered it the day after it opened, when we happened to be in New Friends Colony Community Centre. We ate lunch there, and loved it so much that we came back the very same day with relatives for dinner.

So, to discover that the Yum Yum Tree people were opening another restaurant, and that too in a location I tend to frequent quite a bit, was good news. My husband and I ended up in Select CityWalk Mall this afternoon (having, in the meantime, forgotten that this was where Yum Yum Cha was opening). We were walking through the mall, wondering where to eat, when we chanced upon the restaurant, its outside still covered with paper, its look—on the outside—still of a place that hadn’t quite opened. The person at the door was very welcoming (as a matter of fact, everybody was very friendly—several staff members came by to say hello, to welcome us, and to check on us throughout our meal).

At Yum Yum Cha, a wall covered with origami.

The restaurant’s small, and with a décor and style very different from the relatively posh look of Yum Yum Tree. This looks friendlier, what with its very café-style dark wood and white furniture, and its origami theme (the highlight of which is an impressive ceiling installation of 250 large colourful paper butterflies, though other works of origami—sheep, tea pots, slippers, umbrellas, etc—decorate the walls and ceiling).

But, to the most important thing: the food. As its name suggests, the emphasis here is on yum cha dishes: the menu has its fair share of dim sums (as also other Oriental starters, including sushi and sashimi). There is, however, a fairly substantial selection of rice and noodle dishes, stir-fries, and more, so we decided we’d have a bit of both. For starters, therefore, we chose three dim sums (four pieces per portion): crystal duck dumpling, pink crab dumpling, and prawn yellow curry dumpling. For our main course, we settled for braised pork belly, along with rice—with soy, mushrooms, chives and garlic. For drinks, both of us chose a Thai orange with kaffir lime leaves.

Our starters began to arrive, one at a time (which I appreciate; I don’t like basketfuls of dim sums to be bunged on the table all at once to get cold). Meanwhile, our waitress had put down a set of five different sauces (sticky soy, chilli oil, and a delicious chilli jam among them). As it turned out, none of these sauces were really needed, since the dim sums had so much flavour to them. 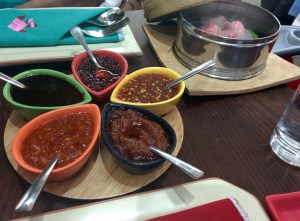 Five types of sauces at Yum Yum Cha, with pink crab dumplings in the background.

First up was the pink crab dumpling, a pink-tinted dumpling stuffed with a delicate garlic-and-pepper flavoured crab meat filling. Good and light and flavourful on its own, though my husband and I also tried some with the chilli jam, and enjoyed it.

Next up was the prawn yellow curry dumplings. These came in shallow ceramic mini-trays nestled inside a steamer, two prawn dumplings sitting in yellow curry, per tray. There was a problem here: unless you’re used to very hot surfaces, getting a hot little tray out of the steamer and into your plate can be painful. Sadly, there was also another problem with this dim sum: the yellow curry had a distinct flavour of raw turmeric. My husband also thought the curry should have been more fiery. I liked the level of chilli and other flavourings in the curry—barring that uncooked turmeric—so that didn’t matter to me.

The prawn yellow curry dumplings, the only not-quite bright spot in an otherwise excellent meal.

The last of our starters, the crystal duck dumpling, is something we’ve had often at Yum Yum Tree, and have always liked: little dumplings filled with a sweet-spicy filling of duck with cherries and hoisin sauce. Delicious as always.

(Oh, and the Thai orange and kaffir lime leaf drink? Served in a container rather like a milk bottle, and beautifully refreshing).

For our main course, the braised pork belly (a portion just large enough for two not-very-hungry people) arrived a few minutes before the rice was brought. This wait for the rice, by the way, was the only hiccup in service: otherwise, even though the restaurant was pretty full, service was on the whole efficient and prompt.
The rice, when it came, was in a big, very hot, grey stone bowl which was uncovered to reveal a bed of rice on which were arranged heaps of lightly cooked mushrooms, corn kernels, red and yellow bell peppers, and fresh chives. Our waiter mixed it all up for us (rather like a bibimbap), warned us again that the bowl was very hot, and left us to eat.

Even though I’d been skeptical about the use of bell peppers and corn in an Oriental dish, this rice tasted great; it had, too, a hint of what seemed to me like cooking wine. Which, in my lexicon, is a good thing. The braised pork, cooked with spring onions, came in its own juices, thin but rich, and heavenly. Full marks on that (and yes, I’m a pork belly aficionado who recognises a good pork belly when she eats it).

The main course: rice with veggies, and a fabulous braised pork belly.

Last up was dessert. We’d initially not planned on having any—cheesecake, crème brûlée and other rather Western desserts aren’t my idea of a perfect finish to an Oriental meal. But a quick glance at the menu post the main course, and I spotted a section of mochi ice creams, of which two flavours—macha green tea, and coconut and jaggery—sounded like something we wanted. We ordered one of each therefore, and decided to share.

Mochi, for those unaware of this product, is made by pounding sticky rice. Nothing to write home about, you might think, but ever since I saw a video of the amazingly skillful way it’s made, I’ve been keen on tasting mochi. It doesn’t taste of much, but has an interestingly elastic, chewy texture that provided an odd contrast to the ice cream. Each large round scoop of ice cream came encased in a skin of bright green mochi, the scoop helpfully already cut into four quarters. The ice creams were both excellent: the green tea delicate and fragrant, the coconut and jaggery perfect in its coconuttiness.

Verdict? A place we’re going to come back to, and soon (Yum Yum Cha formally opens on Monday, October 20). Though there are minor niggles—we thought our table too cramped; the chopsticks were far too thin (“like matchsticks”, said my husband); and there was that problem with the raw turmeric in the prawn yellow curry dumplings. But, on the whole, the food was excellent, the service good, and the ambience pleasant and cheerful. While it’s not cheap (we paid Rs 3,234 for our meal, all taxes and service charges included), it is worth it.

P.S. A couple of months later, on a cold winter evening, we happened to be back in Select CityWalk Mall. We were headed home. But a sudden craving for ramen hit—and we remembered people saying that Yum Yum Cha served a good pork ramen. Let’s get some takeaway, we decided. It would take ten minutes to prepare, we were told, so once we’d finished with the rest of our shopping in the mall, we stopped by again at Yum Yum Cha, placed our order, and waited (not ten, but closer to twenty) minutes for our order to be ready.

By the time we got home, of course, the ramen had gone cold – as we expected – but because the noodles and the soup had been packed separately. Heating it up wasn’t a problem. To start with, one thing I really appreciated was the packing: the soup and noodles (two portions each) were packed in good sturdy spill proof boxes of clear plastic. Not a drop here and there. Along with that came two little boxes of chilli oil and chilli sauce, chopsticks, and paper napkins.

We emptied the noodles into bowls, microwaved the soup separately, poured it onto the noodles, and then, for good measure, nuked the noodle soup again for half a minute. By the end of that, it was nice and hot.

On to the most important thing: the soup itself. This consisted of pieces of roast pork, shiitake mushrooms, thin slices of carrot, and bean sprouts, in a flavourful broth. The good bit of this was that the meat and the vegetables were in generous quantities, and well-balanced: the sprouts fresh and crisp, the mushrooms and pork meaty (I could have done with a teeny bit more fat on the pork), the noodles cooked just right – not too al dente, not gloopy and overdone. Both my husband and I agreed, however, that there was too little broth and too much noodle (yes, in hindsight we could have added less noodle to our bowls, but how were we to know that the proportions wouldn’t work out?) The result was more a soupy noodle than a noodle soup.

My husband had other another problem with the dish: he thought the broth didn’t have as much flavour as it could have.

We paid Rs 1,512 for our two bowls of ramen. It was very filling, but we were a bit disappointed. For that much money (not cheap, mind you), we’d have expected a far better ramen. And there’s an odd fact: Yum Yum Cha put a service charge of 15% on our bill too. When my husband pointed out that since there was no service being provided, this was incorrect, we were told that that was the default setting; it couldn’t be changed. Since we order in frequently from Yum Yum Tree—Yum Yum Cha’s sister concern—Yum Yum Tree has given us a discount voucher, which entitles us to a 15% discount (the sole purpose of which is to neutralise that 15% service charge). We told Yum Yum Cha about that. “Give us a discount, then,” my husband said. But while they admitted that the service charge wasn’t called for, they refused to give us a discount. Unfair, unfair.