In my not-too-recent posts about the impact of the Revolt of 1857 on Delhi’s monuments, I’d dwelt quite a bit on the mosques of the city. The many masjids, which are among Delhi’s most visible historical monuments, and which suffered both indignities as well as damage in and after 1857.

Why not, I thought, talk a bit more about mosques? Most people, after all, even those interested in history, tend to only remember the city’s largest or most splendid mosques – Jama Masjid, the Quwwat-ul-Islam at the Qutb Minar Complex, or at a stretch, the Qila-e-Kohna mosque at Purana Qila. Few people have been to the lovely little Neeli Masjid, or even realise that the gorgeously decorated section behind the Bada Gumbad in Lodhi Gardens is a mosque. 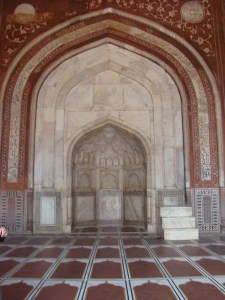 The mihrab at the Taj Mahal mosque, with the mimbar next to it.

Therefore, after having done series on secular monuments and tombs in Delhi, I’m going to begin a series on mosques. I’ll be writing about some of Delhi’s lesser-known but beautiful (or historic, or otherwise worth visiting) mosques.

But, before I start off on that, a little introduction to mosques, and, specifically, their architecture.

Too many non-Muslims have a set idea about what a mosque looks like. Very different structures, actually, all the way from what you see at Atgah Khan’s Tomb to what stands atop Bhojla Pahar, opposite the Red Fort. The basic function of a mosque is to indicate the direction of prayer: i.e, the direction of Mecca – in India, West. As long as a structure marks a direction as West, allowing devotees to know which direction to face while offering namaaz, it is a mosque. This is why the mosque was often seen, in medieval Delhi, in the form of a ‘wall mosque’, a wall on which a decorated mihrab or arch marks it as facing West. Among the examples of wall mosques in Delhi are the ones at Atgah Khan’s Tomb in Nizamuddin, and at the Wazirpur Group of Monuments in RK Puram.

The wall mosque at the tomb of Atgah Khan.

That is the basic mosque. Larger mosques designed for more regular use (mosques at tombs were invariably meant to enable and encourage visitors to pray for the soul of the departed) have more features. Here are some of the more common ones:

The sehan, or courtyard. Since Islam is a congregational religion, mosques typically include a wide space for people to congregate. This is in the form of the sehan, the courtyard in front of the mihrab. Not all mosques have sehans; for example, indoor mosques—like the Jama Masjid in Srinagar—have all their space inside the mosque. In Delhi itself, the Khirki Masjid is, for all practical purposes, without a sehan.

Begumpuri Masjid, with its large sehan.

The hauz, or water tank. Ritual ablutions, or wazu, is an integral part of offering namaaz, so clean water must be readily available at a mosque—and that is in the form of a hauz, a water tank. (Interestingly, if you’re near Delhi’s Jama Masjid, you might want to make your way into the alleys behind the mosque; in one of these is Chaah Rehat, the well that once supplied the water for the hauz at the Jama Masjid. Chaah Rehat is kept locked these days, but the plaque over the gate bears its name). 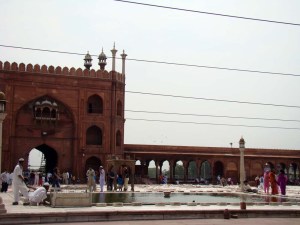 The hauz at Jama Masjid.

The sawaal-jawaab. Okay, if one is to be precise about syntax, this isn’t an architectural feature, and it’s not confined to mosques. ‘Sawaal-jawaab’ (‘the question and the answer’) is a term used to indicate architectural symmetry. The Mughals, of course, were obsessed with symmetry, but even before them, mosques were being built in a fairly easily recognisable form: a sehan in front, and a covered space with a façade of arches. The number of arches, both in pre-Mughal and Mughal mosques, is always an odd number: 3, 5, 7, or—as in one of the most spectacular mosques in India, Delhi’s Jama Masjid, 11. The arch in the centre is larger and more prominent than the arches on either side. And the sets of arches on either side comprise the ‘sawaal’ and its ‘jawaab’: they match each other.

Jama Masjid, its facade a fine example of the sawaal-jawaab.

The iwaan. The central arch of the façade is the iwaan: on either side of it are the sawaal and the jawaab.

The liwaan. This is the name given to the space under the iwaan. You step through the iwaan—the main arch—and you’re in the liwaan. Some people also use it to refer to any enclosed space in a mosque, with a wall on one side and a row of arches on the other, but there is another specific term for that…

…which is the riwaaq. ‘Riwaaq’ is, like sawaal-jawaab, not a masjid-specific term: it is used in architecture to refer to something like a cloister: an arcade or colonnade, looking out onto an open space on one side, and with a wall or other inner chambers on the other side. Larger mosques (like the Jama Masjid) have riwaaqs to act as resting places for devotees and visitors to the mosque.

The mimbar, also written as minbar. The mimbar (or minbar) in a mosque is the equivalent of a pulpit in a church: an elevated platform that allows a preacher to address a congregation. Generally placed on the right of the mihrab, the mimbar usually consists of a short flight of steps, on which the imam stands (traditionally, the topmost step is left vacant—it is believed to be occupied by the Prophet). Interestingly, the Jama Masjid in Delhi has two mimbars: one inside, next to the mihrab; and another, erected after Shahjahan’s time, in the sehan outside. 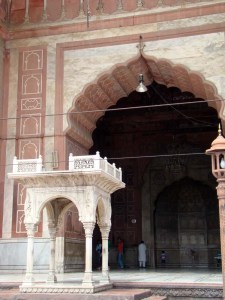 At the Jama Masjid, a mimbar which stands outside; the main mimbar is inside, next to the mihrab.

Note, also, that mosques, based on which gender they’re supposed to cater to, are divided into the more usual mardana (male), and zenana (female) mosques. Some larger mosques, like the one at Begumpuri, have a separate, smaller section that serves as a zenana masjid adjacent to the mardana masjid.

Those, therefore, are some of the terms you’re likely to come across when you read my posts on masjids.

And, before I sign off, a funny little sher with a masjid connection:

(Where I had once sung songs of joy,
Look at fate—there I wept.
My shoes were lost at the masjid;
Where I had got them, there I lost them).

Of course, everybody knows you must take off your shoes before you enter a masjid, or even its sehan—but most people don’t realise that you can actually carry your shoes into a masjid, as long as the soles of the shoes are facing each other (the logic is that, even inadvertently, the dirty soles of the shoes shouldn’t touch the sacred space of the mosque). So, if you’re visiting a masjid and not going to offer namaaz (in which case, you wouldn’t be able to hold your shoes all the time), you can slip off your shoes, hold them so that their soles touch each other, and carry them in.

18 thoughts on “A Quick Guide to Mosque Architecture”