Today is the 80th birthday of my father, Andrew Verity Liddle. Papa has influenced me in many ways, but possibly the greatest influence on my life that I owe to him is my love for old Hindi cinema and its music. Ever since I was a toddler, I’ve been surrounded by the voices of the 50s and 60s—if it wasn’t our old record player and the LPs whirling on it, it was the radio, with Ameen Sayani’s voice announcing one song after another… and most of it courtesy my father, who loves the music of that period.

As I’ve mentioned on several other posts on this blog, my father had an elder brother who worked in the cinema industry. David Vernon ‘Verni’ Liddle (also known professionally as ‘David Kumar’, or ‘Kumar Sahib’), nine years older than my father, was a guitarist who played for some of the greatest hits of Hindi cinema (and yes, I have mentioned some of these before, but recent research done by my father has thrown up pleasant surprises far beyond what I’d expected).

END_OF_DOCUMENT_TOKEN_TO_BE_REPLACED

A few days back, an old photo I’d posted on Facebook, of the Chand Baori at Abhaneri, suddenly began drawing a good deal of attention. People wanted to know where it was, how old it was, and so on. That … END_OF_DOCUMENT_TOKEN_TO_BE_REPLACED

Delhi has a vast number of mosques (not unusual, considering the many centuries this city was ruled by Muslims). They’re large and small, obscure and prominent. And some of them have really odd names: the Imliwaali Masjid (‘the mosque of the tamarind’); the Amrudwaali Masjid (‘the mosque of the guava’), and the Randi ki Masjid (‘the prostitute’s mosque’, formally known as Masjid Mubarak Begum, but called by its unsavoury epithet because it had been built by General Ochterlony’s extremely unpopular Indian wife Mubarak Begum).

And then there’s the Moth ki Masjid, near South Extension: the ‘mosque of the lentil seed’. 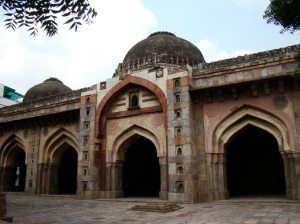 END_OF_DOCUMENT_TOKEN_TO_BE_REPLACED

Some days back, I’d written about one of Delhi’s large but little-known mosques, the massive Begumpuri Masjid, near Malviya Nagar. In a turn-around, this week’s (or fortnight’s, whatever) interesting medieval mosque is one that’s much more visible, even though most … END_OF_DOCUMENT_TOKEN_TO_BE_REPLACED

A few weeks back, I’d decided to begin a series of articles on some of the more interesting medieval mosques of Delhi. I began with an introduction to mosque architecture, then wrote a piece on one of the most striking … END_OF_DOCUMENT_TOKEN_TO_BE_REPLACED

A good way to begin a new year? Launch a series of articles on some of my favourite medieval mosques in Delhi! As is probably obvious from my article on mosque architecture, I find old mosques fascinating (well, old any … END_OF_DOCUMENT_TOKEN_TO_BE_REPLACED

In my not-too-recent posts about the impact of the Revolt of 1857 on Delhi’s monuments, I’d dwelt quite a bit on the mosques of the city. The many masjids, which are among Delhi’s most visible historical monuments, and which suffered … END_OF_DOCUMENT_TOKEN_TO_BE_REPLACED

A couple of weeks back, I wrote a post on the repercussions, in Delhi, of the revolt of 1857—not just on the people of the city, but on the monuments. Especially the mosques of Delhi. A couple of readers made … END_OF_DOCUMENT_TOKEN_TO_BE_REPLACED

Last week, on my Facebook page, I’d posted a brief history of the origins of one of Delhi’s most unique festivals, the Phoolwaalon ki Sair (also known as the Sair-e-Gulfaroshan). In the discussions which ensued, one reader pointed out that … END_OF_DOCUMENT_TOKEN_TO_BE_REPLACED

Ever wondered why a lot of Delhi’s medieval monuments—the ones with plastered exteriors, not stone—have that blackened look about them?