Some days back, I’d written about one of Delhi’s large but little-known mosques, the massive Begumpuri Masjid, near Malviya Nagar. In a turn-around, this week’s (or fortnight’s, whatever) interesting medieval mosque is one that’s much more visible, even though most people who come by here are probably not too keen on admiring the architecture. The Bada Gumbad mosque, in the Lodhi Gardens. 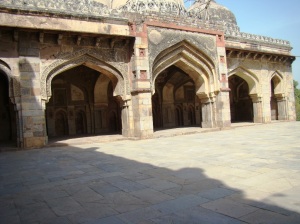 The facade of the Bada Gumbad Mosque.

The Bada Gumbad (‘large dome’, literally) is one of the largest and most visible tombs in the Lodhi Gardens (an easy way to identify it is by the fact that it stands right opposite the Sheesh Gumbad, a very similar tomb in size and appearance, which has traces of bright blue tiles above the doorway). Nobody knows who is buried in Bada Gumbad, though the building—a large square one, topped with a dome—is impressive enough to imply that this was someone important and wealthy. It dates back to the Lodhi period, the 15th-16th century CE. 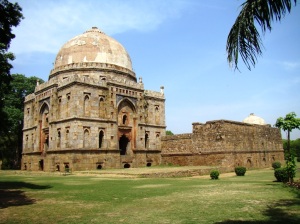 Bada Gumbad, seen from a distance.

Bada Gumbad, while imposing enough as far as size is concerned, is not extremely ornate. It’s made largely of grey Delhi quartzite, which is so hard, it’s difficult to carve. There is some ornamentation in the tomb—the doorways, for example, have carved red sandstone, and there’s more red sandstone in the jharokhas (oriel windows) on the outside. The exterior is pleasant—strips of stone and narrow arches marked in stone give it the illusion of being a double-storeyed building—but the Bada Gumbad’s best-kept secret is hidden away behind a surrounding wall.

This is the Bada Gumbad Mosque, a tiny little five-arched mosque that stands just behind the tomb, abutting it. It’s not huge—all of it could probably easily fit into one bay of the Jama Masjid—but it’s the exquisite beauty of it that is breathtaking. Because the Bada Gumbad Mosque is, in my opinion, the finest example of incised plaster (for which, incidentally, the Lodhi period is well-known: if you see ornate incised plaster in an old monument in Delhi, you can probably safely assume it’s from the Lodhi period).

Inside the Bada Gumbad Mosque.

Incised plaster used to be made by slathering a lime-based plaster thickly onto a surface, and then, before the plaster could dry, carving patterns into it. This, obviously, made for a far cheaper and less labour-intensive option than stone carving. It also allowed much more intricate work, making for what is known as the ‘horror vacuii’ technique: literally, work that’s so intricate and so filling-every-available-space that it shows a ‘horror of vacant spaces’.

… and the Bada Gumbad mosque is almost ethereal in the intricacy of its incised plaster decoration.

The arches are outlined with bands of incised plaster, carved with floral designs and verses from the Qu’ran:

A view of the mosque’s interior.

There are niches (also known as pishtaqs) with incised plaster:

Incised plaster on a niche at the mosque. 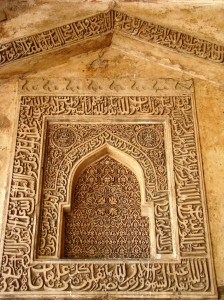 More incised plaster on a niche.

The squinches, too, are not merely squinches; they’re works of art.

Incised plaster decorating the squinches in the mosque.

The ceiling under the main dome of the mosque too has a circular design of incised plaster, and this has the added attraction of still having some of the original paint—mostly in red and blue—intact. 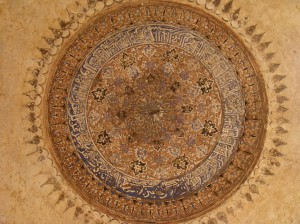 A circular pattern of painted incised plaster on the mosque’s ceiling.

If you go to Lodhi Gardens (and this is a good time to visit, what with Delhi’s weather still not unbearably hot), do have a look at the Bada Gumbad mosque: it’s stunning.

14 thoughts on “Tiny but exquisite: the Bada Gumbad Mosque”