A couple of years back, in celebration of the birth anniversary of C Ramachandra, I’d posted a selection of my favourite songs from his oeuvre. In my post, I’d described C Ramachandra as ‘underrated’ (a reflection of the fact that the average person who listens to old Hindi film music—not the diehard enthusiast who knows, or tries to know, just about every detail about the songs of yesteryears—tends to talk about ‘bigger names’ like SD Burman, Naushad, OP Nayyar, etc). A couple of readers refuted that: they said C Ramachandra wasn’t underrated; among the music directors of that period who were underrated was Chitragupta.

I may not have agreed with AK and Kersi Mistry on C Ramachandra, but I do agree about Chitragupta: very talented, and oh, so overlooked when it comes to lists of great composers. Yet, when you listen to his songs, you’ll find some of the loveliest tunes, the most nuanced of compositions. Even some immensely popular songs.

Born on November 16, 1917 in Gopalganj district of Bihar, Chitragupta ended up in the film industry after an initial stint as a lecturer in Patna (interestingly enough, he held a master’s degree in both journalism as well as economics). In Bombay, Chitragupta began his career as an assistant to SN Tripathi; from about 1946 onwards, he was composing on his own. He went on to compose songs for both Hindi as well as Bhojpuri cinema, right up to 1990 (he passed away in January 1991). It’s sad that more people know of Chitragupta’s sons—Anand-Milind—than they do about the duo’s much underrated but extremely talented father. 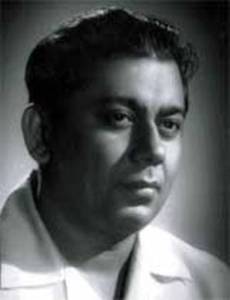 Here, therefore, are ten Chitragupta songs that I especially like. Some are well-known ones (though a lot of people would probably not be able to say who had composed the song in question). Some are less popular, but undeservedly so. All, as always, are from pre-70s films that I have watched.

1. Ae saba unse kh zara (Ali Baba aur Chaalees Chor, 1954): What an absolutely lovely song this is. I confess that I fell in love with it the first time I heard it, decades ago on Chitrahaar (the lucky thing was, we had a blank VHS cassette in the VCR when this song came on, and were able to record it—which meant we watched it over and over again in the years to come, and never tired of it). Just listen to the simple charm of the music: it’s so gentle, so melodious, and so very not in your face. Asha’s and Rafi’s voices are allowed to be the song; the instruments just provide a wonderfully subdued background to them. 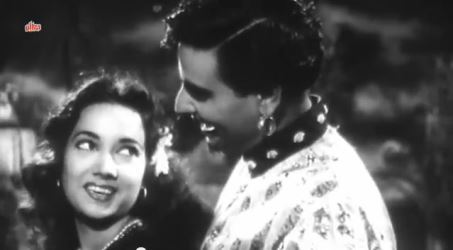 2. Agar sun le toh ek naghma huzoor-e-yaar laaya hoon (Ek Raaz, 1963): I remember this song from my childhood: it was on one of the LPs my parents were always playing at home. I grew up, therefore, loving Agar sun le toh ek naghma, and didn’t realize till about a year ago that not too many people knew about it (that emerged when I listed this in my post on male pianists). Even if it’s an obscure song (as Ae saba unse keh zara is, too, I concede), it’s a good song: the tune is wonderful, Kishore’s voice is perfect, and the interludes—so very different from when he’s singing—are a superb contrast to the rest of the song. 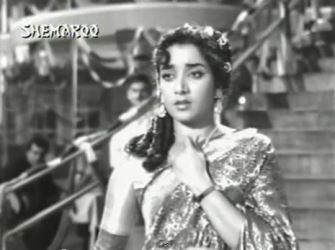 3. Ae meri zindagi tu nahin ajnabi (Pyaar ka Sapna, 1969): Like Ek Raaz and Ali Baba Chaalees Chor, Pyaar ka Sapna was another fairly obscure film (a contributing factor, perhaps, in Chitragupta’s lack of popularity, that he ended up composing far too often for B- or C-grade films?). The music for this prettily romantic song is appropriately gentle and soothing. I like the occasional notes—on different musical instruments—which come in now and then, bridging the words and lending a somewhat Western touch to the song (apt, considering most of the film is set in Europe). 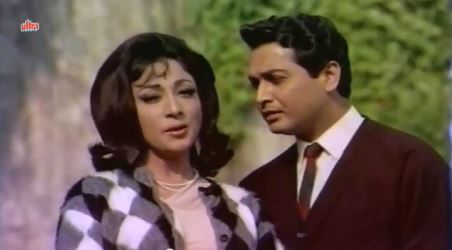 4. Ek raat mein do-do chaand khile (Barkha, 1959): Chitragupta’s versatility is undeniable, if you examine his repertoire closely, going all the way from peppy Westernized tunes to very classical Indian ones, from the delightfully comic to the mournful. Yet one type of song that stands out as his forte (even in this list, actually) is the romantic song. Melodious and lovely, like Ek raat mein do-do chaand khile, in which a newly-married young husband serenades his shy young bride, comparing her to the moon: one moon shines in the sky, he says, for everyone—and one moon shines here, just for him, wrapped in a ghoonghat. 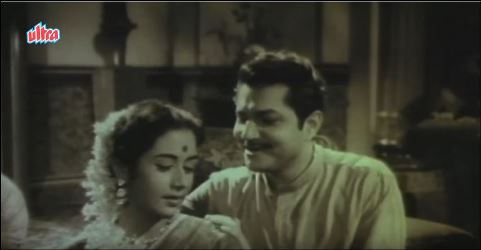 5. Machalti hui hawa mein chham-chham (Ganga ki Lehren, 1964): Ganga ki Lehren was a relatively forgettable film; what is memorable about it, however, are its songs, composed by Chitragupta—and a very eclectic set of songs too, from the beautiful bhajan (and that says a lot, coming from someone like me, who doesn’t usually care for bhajans) Jai jai hey Jagdambe maata to the frothy Chhedo na meri zulfein. And the title song, about the Ganga—not a solemn religious song to the Mother of Rivers, but one that celebrates the swiftness and freedom of its waves. The music and the singing are, to me, a good reflection of the playfulness of the waves of the Ganga. 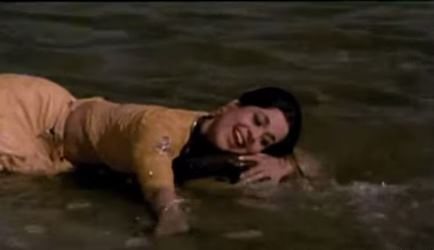 6. Koi bata de dil hai jahaan (Main Chup Rahoongi, 1962): Main Chup Rahoongi fared slightly better than most of the films from which I’ve listed songs previously in this post: at least most people have heard about it (possibly because it featured two major stars—Meena Kumari and Sunil Dutt?) While not really appealing to me (the lead female character was far too self-sacrificing a Sati Savitri for my taste), it did have some memorable songs. Tumhi ho mata pita tumhi ho is from this film; so is Mere dil kabhi toh koi aayega; and so is the very romantic Chaand jaane kahaan kho gaya. And another lovely romantic song, Koi bata de dil hai jahaan.  I love the melody of this, the playful charm and the rippling, light music. 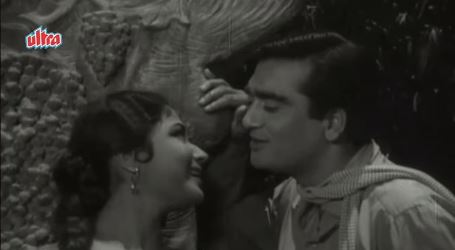 7. Yeh parbaton ke daayre yeh shaam ka dhuaan (Vaasna, 1968): I will admit that I watched Vaasna mostly for this song. It had a cast (Rajkumar, Biswajeet, Padmini, Kumud Chhugani) that didn’t really appeal to me, but this song helps compensate for the two and a quarter hours of high melodrama. Against a series of backdrops of the heritage monuments of Hyderabad—the Golconda Fort and the Qutb Shahi Tombs in particular—two lovers sing of their love for each other. Sahir Ludhianvi, despite that promising start to what might have been a paean to natural beauty (something he was very good at), turns this into a fairly run-of-the-mill romantic song. And Chitragupta’s music is lovely, haunting and melodious. 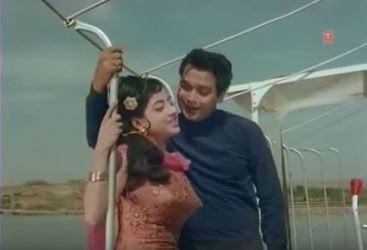 8. Mahalon mein rehnewaali dil hai gareeb ka (Tel Maalish Boot Polish, 1961): Tel Maalish Boot Polish was another of those films that really has very little to recommend it—except Chitragupta’s music. He composed some wonderful tunes for this film, and I had a hard time choosing between the classical duet Kaanha jaa re (where Manna Dey sings playback for Chandrashekhar) and this one, where Talat sings playback for the actor. Mahalon mein rehnewaali won by a narrow margin. It’s a lovely, liltingly romantic song (and I personally think Talat’s voice is perfect for it). 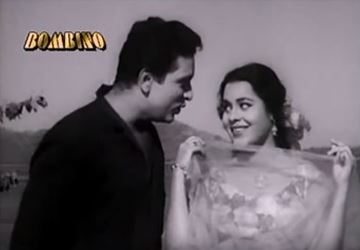 9. Jaag dil-e-deewaana rut jaagi (Oonche Log, 1965): Oonche Log was one of the few good films for which Chitragupta composed. Offbeat, unusual: unusual enough to not appeal to an audience which was perhaps too fond of the predictable to be pleased with something so different from what one expected of Hindi cinema. The film didn’t do well, but two songs from it are still remembered. One is the duet Aaja re mere pyaar ke raahi; the other is this dreamily romantic solo. Rafi’s voice caresses the tune: so melodious, so soothing. 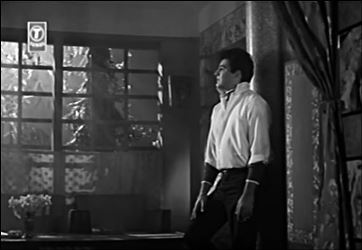 10. Mujhe dard-e-dil ka pata na thha (Akashdeep, 1965): Akashdeep was one of those films I’ve watched simply because of one song—and it was this one, a Chitragupta composition. Akashdeep had other nice songs (Dil ka diya jalaake gaya and Mile toh phir jhuke nahin are among my other favourites from this film), but I have a soft spot for Mujhe dard-e-dil ka pata na thha: the music, with those little flourishes now and then, the gentle romance of the song, Rafi’s rendition—all combine to make this a very romantic song. Classic Chitragupta. 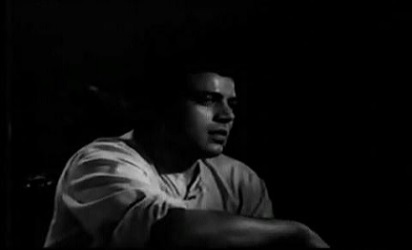 And, because I couldn’t resist it: a bonus song. I call this a bonus song, because it’s from a film I haven’t seen (and which I haven’t even been able to track down anywhere, so the chances of my watching it—at least in the foreseeable future—are pretty dim). From Insaaf (1956), which, according to IMDB, starred Ajit and Nalini Jaywant, the absolutely lovely Do dil dhadak rahe hain aur aawaaz ek hai. Sung by Asha Bhonsle and Talat Mahmood, this duet is simply sublime—all the way from the brief opening aalaap, to the very gentle sweetness of the tune. The way the two voices meld together, the way the music swells and dips, the soft romance of it all.

(Someone’s commented on the Youtube clip for this that it’s borrowed from Blue Danube, but I think there’s sufficient difference between the two tunes for it to not be immediately recognizable—at least not to me).

70 thoughts on “Ten of my favourite Chitragupta songs”