Some time back, I received a request from a blog reader and long-ago professor of mine: would I do a post on songs sung at pianos? Hindi cinema, back in the good old days, invariably had a song at a piano per film, often more. I had to inform my ex-prof: I had already compiled, some time back, a post on piano songs: specifically, women pianists. But this gave me an idea: how about a post on male pianists? After all, there has been no shortage of songs picturised on men sitting at pianos.

Therefore, this post, of ten ‘male pianist’ songs that I like – for various reasons, of which one is always that I like the music and the rendition of the song, though in some cases, there’s the added bonus of good picturisation too. As always, each song is from a pre-70s film that I’ve seen. I have, however, imposed a few more restrictions on myself to make the compilation of this post a little more challenging:

(a) No two songs are picturised on the same actor
(b) All songs are solos, or – at the most – a solo with a chorus; and
(c) In all songs, the person at the piano is the one singing (this is why I’ve excluded gems like Tu jahaan-jahaan chalega, Mujhe tum mil gaye humdum, Main khushnaseeb hoon, and the female version of Yoon toh humne laakh haseen dekhe hain)

Here we go, then, in no particular order:

1. Kisi patthar ki moorat se (Humraaz, 1967; Sunil Dutt): When I was thinking of men playing pianos in Hindi films, the one face that kept popping up in my memory was that of Sunil Dutt: accompanying Sadhana as she sang the title song in Mera Saaya; singing Chalo ek baar phir se in Gumraah; and this song. I have always liked the songs of Humraaz a lot, and this one is a particular favourite. It’s the most popular setting for a piano song: a party, in which the hero serenades the woman he’s in love with. She is still nursing a broken heart, but his assertions that he will melt this ‘patthar ki moorat’ (and doesn’t Vimmi do a very good impersonation of a stone statue?!) do seem to have some effect. Lovely music and rendition, and Sunil Dutt is a sight for sore eyes.

3. Main dil hoon ek armaan bhara (Anhonee, 1952; Raj Kapoor): Another party song with a man at a piano. This time, it’s Raj Kapoor, lip-synching (unusually) to the voice of Talat Mahmood. This is, again, a romantic song, but unlike Kisi patthar ki moorat se – which addresses one particular individual, and is sung wholly for her – or Khwaab ho tum ya koi haqeeqat, which addresses an amorphous dream woman – Main dil hoon ek armaan bhara is more an expression of the singer’s own love for romance, his desire to be desired: and it has the desired effect – it intrigues a beautiful woman to sit up and listen.

Besides the fact that the song is lovely, I find it interesting that at the start of the song, the first few notes played on the piano do seem to be played correctly by Raj Kapoor – did he learn them especially for this song, or did he actually know how to play the piano?

4. Pyaar deewaana hota hai (Kati Patang, 1970; Rajesh Khanna): Yet another song set in a party, with the hero at a piano (and, in a change from the usual, accompanied by other musicians, too). I always think of Pyaar deewaana hota hai as a Yeh shaam mastaani, but in an indoor setting: the hero tries to entice the heroine, knowing full well that his love for her is by no means one-sided, and unable to understand why she insists on keeping her distance. In this song, he has a little more success: she is initially embarrassed and awkward, but the way her eyes light up shows that she is, indeed, attracted. Wonderful song, though I wish the rather garishly dressed people around the piano (not to mention the fat, intrusive candle on top of it!) had been dispensed with. 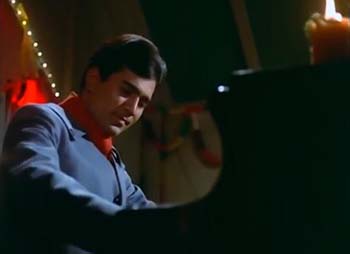 5. Manzil wohi hai pyaar ki (Kathputli, 1957; Balraj Sahni): Finally, a change: not a piano being played at a party. Manzil wohi hai pyaar ki, sung in Subir Sen’s beautiful but underrated voice and picturised on one of my absolute favourite actors, Balraj Sahni. Manzil wohi hai pyaar ki can be a highly deceptive song, because the entire piece – lyrics and much of the picturisation (unless you note the people going past, on various errands, towards the end of the song) – tends to convey the impression that this is a romantic song: a lover sitting at a piano and singing to his beloved who dances around and gives him loving looks. It couldn’t be further from the truth: in Kathputli, Vyjyantimala is paired with Jawahar Kaul, and Balraj Sahni plays a theatre director to her dancer. No romance there, just a business relationship. You wouldn’t think it to watch this song. But what a lovely song, nevertheless. 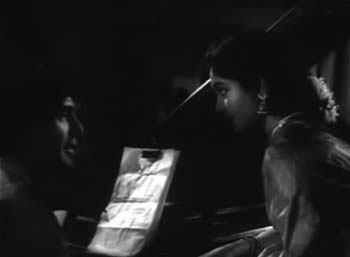 6. Tum bin jaaoon kahaan (Pyaar ka Mausam, 1969; Shashi Kapoor): Just about anybody with an interest in the Hindi film music of the 1960s knows that this film featured two versions – both excellent – of a wonderfully romantic song, Tum bin jaaoon kahaan. The first, with Bharat Bhushan lip-syncing to Kishore Kumar’s voice, came pretty much at the start of the film. The second, longer version, sung by Rafi for Shashi Kapoor, was later.

Most people tend to forget that there’s a third version – a sad one, of despair because a love is being throttled. And it’s a piano song. A party song, but one with a difference, because the camera keeps moving from the scene of the party to another nearby room where the half-deranged mother (Nirupa Roy, who else?) of a long-lost son suddenly remembers. 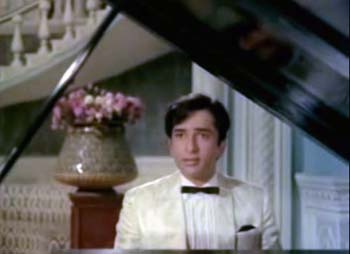 7. Aaj ki raat mere dil ki salaami le le (Ram aur Shyam, 1967; Dilip Kumar): Somewhat similar in tone to Tum bin jaaoon kahaan – set at a party, but also a farewell from a man to the woman he loves – is this song. The words are lovely (though I must make a somewhat embarrassing confession: as a child, the only ‘salaami’ I knew of was the Italian sausage, so the lyrics puzzled me a bit); the music is wonderful, Rafi sings it with emotion – and Dilip Kumar, though not looking quite as debonair as he was in an earlier piano song (Jhoom-jhoomke nacho aaj, from Andaaz, nearly two decades earlier), conveys a lot of feeling without looking melodramatic.

8. Aapke haseen rukh pe aaj naya noor hai (Bahaarein Phir Bhi Aayengi, 1966; Dharmendra): In another change from the piano-at-party theme, a piano played at a home. Dharmendra plays the young journalist who goes to meet, at her home, the woman who owns the newspaper he works for – and finds, when he gets there, that her younger sister is the girl he’s in love with. What he doesn’t realise is that the elder sister is in love with him – and when, at the request of the two women, he sits at the piano to sing a song, the song is accepted as an avowal of his love by both women.

I love the sheer romance of this song: the music and lyrics are meltingly beautiful, and the picturisation is perfect: Dharmendra, oh-so-handsome, Tanuja as pretty as ever, and Mala Sinha, lovely in that shyly demure way.

9. Patthar ke sanam tujhe humne (Patthar ke Sanam, 1967; Manoj Kumar): Another song featuring a love triangle, of two women and one man. Manoj Kumar plays the man, in love with Waheeda Rehman’s simple village belle character, but also lusted after by her chic urban friend (played by a very attractive Mumtaz). Unlike Aapke haseen rukh pe, however, this isn’t a romantic song; it’s of a blighted romance, of a fidelity that has proven to be all a hoax. And, as Anu pointed out in one of her posts, everybody in Hindi films seems to crib about being duped or having their hearts broken in public. This is no different.

I like Manoj Kumar when it comes to some of his early (and non-patriotic) roles, but Patthar ke Sanam isn’t one of my favourites. This song, however, sounds absolutely lovely, and that is why it features on this list. Plus it has Mumtaz. Enough. 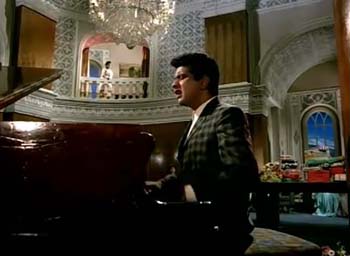 10. Agar sun le toh ek naghma (Ek Raaz, 1963; Kishore Kumar): And, to end the list, one of the very few piano songs in which you can see that the actor (as far as I can tell) actually does play the piano. And not merely at one point, but again and again. The scene is a familiar one: the heroine, the villain (not just leering at the heroine, but actually gloating, because his engagement to her has been announced); the hero, singing of his broken heart; and the rest of the people at the party, who are almost an audience for this drama being played out. A very melodious song, by the underappreciated Chitragupta.

Someone in the cinema blogosphere had once commented that one of their relatives had married an American. This American bahu had seen her fair share of old Hindi films. When she went to her first party in India, she was very disappointed to discover that there was no piano and nobody to sing a song! But Hindi films remained full of pianos till well into the 1990s, though I rarely see them now except in period films.

180 thoughts on “Ten of my favourite ‘male pianist’ songs”