Last May, my husband, my daughter and I shifted house. We’ve shifted house before (though never with a toddler in tow), but this time was rather more harrowing than every previous experience. The movers and packers we’d hired turned out to be a thoroughly inefficient and poorly trained lot, requiring constant supervision. They left debris—newspaper, scraps of cardboard and more—littered all across our new home, and the dumped al my books, each one of my precious books, in one untidy pile on the floor.

Then, on the second day in the new house, an insect flew into my eye and caused an infection that didn’t go for a month. Within the first week, the RO conked out; the kitchen tap suddenly started spewing black water; and we discovered that one of the pipes was so badly choked with plaster left behind by the repair-and-renovation gang that it had to be torn up and redone.

But at least we didn’t have people getting murdered in our backyard. 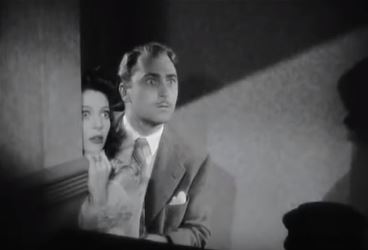 A Night to Remember is one of those sadly rare films, the comedy combined with the mystery. It begins early one night with Nancy (Loretta Young) and her husband, a murder mystery novelist named Jeff Troy (Brian Aherne) getting out of a taxi at their new flat. Nancy is very excited about it; Jeff less so, though he remarks that the place looks familiar [oddly enough, neither of them has visited the place before. Which just goes to show, in light of what follows, how you can’t be too careful when choosing a home]. 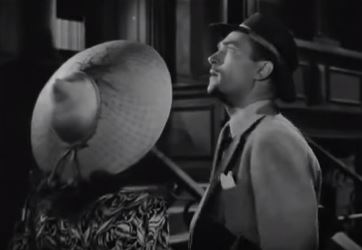 Jeff can’t remember, though, why this place is familiar. The cab driver pipes up: he certainly remembers. This was where he got paid 25 bucks to haul away a pair of dead bodies.

Huh? Jeff is already getting ready to jump back into the taxi, but Nancy dissuades him: oh, this is a lovely place. Come on in, come on in. They are met by the landlord, Mr Turner (Don Costello), who is taken aback—and it seems, unpleasantly—at their arriving so soon; they were supposed to come on Thursday. Nancy explains that she was so excited about moving in, she couldn’t wait. Their furniture is already on the way, too, and should be arriving soon.

That’s all very well, Mr Turner says, but the problem is that none of the lights in their flat work, and the door leading out doesn’t close.

This conversation is interrupted by shrieks, and the housekeeper comes racing up from the basement to say that a huge monster has been crawling over her foot again. [That Nancy is still not cowed says a lot for her nerves]. Mr Turner hushes the housekeeper—her screams have also attracted the attention of a man whom we glimpse briefly as he begins to come down the staircase; Nancy and Jeff don’t see him, but he, noticing them, quickly ducks back into the room from which he’s emerged.

Mr Turner takes the Troys to their apartment—which is in the basement [with that monster or whatever]. Having shown them whatever can be seen by the light of candle, he goes off, and Nancy tries to buoy up the spirits of her husband by predicting how wonderful this place will look once their furniture is in and the lights are working. They’ve even got a garden! They go out to it [and a shabby, weed-grown bit of land it is, too] and Jeff finds a horseshoe there. A horseshoe for luck, Nancy says, so they bring it in. 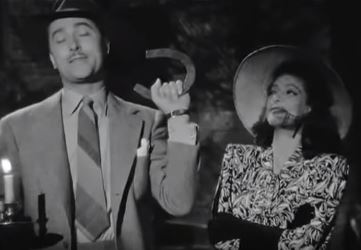 And now some unwelcome news arrives. A telegram comes from the movers, saying that they’ve got delayed; the Troys’ furniture will be delivered after two hours.

Are they going to stick around in the dark for two hours? No; Jeff suggests they go out and have dinner somewhere nearby and then return in time to receive the furniture.

When they step out into the street, Nancy runs into an old friend, Anne (Jeff Donnell), whom she hasn’t seen for several years. It turns out that Anne, who is now married, lives in the same block of flats as Nancy and Jeff. But—the Troys have moved into the basement apartment? Suddenly, as if a switch had been thrown, Anne becomes flustered and worried and scurries off upstairs, saying that her husband will be waiting for his dinner…

Upstairs, we see Anne, her husband Scott Carstairs (William Wright), Turner and another man named Lingle (Richard Gaines) talking. The mood is tense; all four of them seem on edge, with Anne pretty much on the brink of toppling over. How much longer will they have to stay cooped up here, they ask. Should one go to the cops—no, no; that isn’t possible.

Jeff and Nancy find a nearby restaurant, a cheery place run by a woman named Polly (Lee Patrick). While Jeff seats himself and orders some dry toast—to put under the table leg, which is very wobbly—Nancy goes off to make a phone call to the movers, to follow up. While she’s looking through the telephone directory, a man goes into the next phone booth, and Nancy overhears him making an appointment—in a threatening tone—with somebody. Meet me at 13 Gay Street, he says. In the basement.

Which, realizes Nancy, is their flat. She is so horrified that she hurries back to her table, where Jeff is chatting with Polly. Nancy blurts out what she’s just heard, and Polly looks somewhat goggle-eyed when she finds out that the basement flat at 13 Gay Street is where Nancy and Jeff have moved in. It turns out, then, that Polly also lives in the same building, on the second floor. She tells them not to mind the man Nancy had overheard; she knows him, and he’s a bully, but no-one to be scared of.

Polly races off (and we soon see her ensconced with the lot on the second floor, also pacing about and fretting)…

… while Jeff tries to confront the man Nancy had overheard, and gets whacked for his efforts.

Finally, the Troys come back to their flat. Among the things they notice is the sound of running water. This they trace to the bathroom, where they find the bathtub draining. Who filled it?

They also discover other odd things. The horseshoe, for example, which Jeff had left on the windowsill, is now lying on the floor, well away from the window. Something very puzzling seems to be going on.

Anyway, the movers arrive, the furniture is arranged, and Nancy and Jeff are finally alone. Even as they’re getting things in place, the Troys discover what the crawling-over-foot monster is: a large turtle, with a couple of initials (including JT) etched into its shell. This serves to jog Jeff’s memory, and he remembers why this place seemed familiar: this used to be a speakeasy! This turtle was a regular mascot back then, and the initials of the people who won the regular drinking competition here used to be etched on its shell. JT stands for Jeff Troy.

But next morning, when Nancy and Jeff wake up, it’s to find that there’s a dead body in the garden outside, and it’s the man whom Nancy had heard fixing up to meet in the basement apartment the previous night.

What is going on?

Pretty much everything, to be honest. The balance between comedy and mystery is good: there is a decent enough mystery here, surrounding that murder and the very odd behaviour of some of the characters. And there’s a hefty dose of comedy, most of it in the little things: the door that jams (but mostly only for Jeff; everybody else seems to know just how to open it); the interactions between the cops and Jeff; Jeff’s efforts to be detective… all are fun.

And, especially, Brian Aherne, who is a hoot as the mystery writer trying to be detective. I like that his character isn’t completely clueless (he, along with Nancy, does manage to crack some important clues and get to the heart of the matter), but then it’s not as if Jeff is the muscle-flexing, all-powerful hero who runs the culprit to earth all by himself. The balance is maintained.

Nothing, really, that I outright disliked, but yes, the housekeeper and the turtle were a bit tedious and too obviously there just as red herrings.

Nevertheless, a delightful film. Entertaining, fast-paced, with good dialogues and great acting, and just generally thoroughly enjoyable. If you want to watch A Night to Remember, it is—at the time of writing—available on Youtube, here.