Summer is around the corner. And summer, for me, means mangoes and watermelon and tall cold glasses of nimbu-paani. The sight of amaltas and gulmohar trees in full bloom.

For my four-year old daughter, the Little One (or LO, as I refer to her on this blog), summer means swimming. Till last spring, we lived in one of those Delhi Development Authority colonies (which meant no decent swimming pool anywhere in the vicinity). Then, in May, we shifted to Noida, and to a housing complex which has its own lovely little swimming pool (including, on the side—much to the LO’s delight—a kiddie pool). My husband decided to start the LO off on swimming lessons immediately, and she took to them like a duck to water.

With summer looming, the LO can’t wait to get back into the water. Tuesday last week, we were given the very welcome news that the pool was going to be opened this past Sunday. Since that was Easter and the LO was pretty much partying all day, swimming was out of the question. But she knows (and she’s made sure we know) how Saturday morning is going to begin.

… which reminded me just how often we see swimming pools in Hindi cinema, especially in the 60s. You couldn’t have a film in a modern, urban setting (I’m not talking of the historicals and the stories in rural settings) without a swimming pool somewhere or the other. It could be a place where a hero and heroine flirted (Waqt); it could be a spot for some unwanted attention (Sharmeelee); it could even be used for some rigorous exercise by an ageing wannabe Casanova (Shagird).

And it could be a setting for songs. 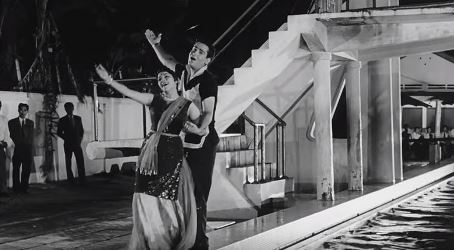 Ten of my favourite (some more favourite than others) songs whose setting is a swimming pool. A modern swimming pool, not just a natural body of water where someone’s swimming. Besides my usual self-imposed rule of listing only songs from pre-70s films that I’ve seen, one criterion I added was that the setting for at least three-fourths of the song should be the swimming pool. The singer needn’t necessarily be in the pool (it could be a poolside song, as several in this list are)—but the swimming pool and its immediate vicinity should be the setting through most of the song.

1. Tirchhi nazar se yoon na dekh (Ek Phool Chaar Kaante, 1960): This song gets first billing on my list for two reasons. One, because I generally like the song a lot—Rafi’s singing and Shankar-Jaikishan’s music. Two, because (like me), the LO is a big fan of Johnny Walker’s. And Johnny Walker is a delight here as always, as he goes about flirting with a lovely blonde (does anybody know who this actress is?) who carries about with her a black cat—the cat, it seems, basically being there only to add its meows to the song at appropriate moments. Plus, of course, as in any self-respecting swimming pool song from the 60s, there are plenty of backup dancers and backup swimmers/divers. Very pleasant and fun.

2. Thandi hawa kaali ghata aa hi gayi (Mr & Mrs 55, 1955): This was the first song that occurred to me when I started thinking of this list. Madhubala’s frothy Anita, along with a bevy of sahelis, sings a song in praise of the monsoon—and, inevitably, its link with romance. I love the picturization of this song: there’s very little dancing, really, but the action is all beautifully choreographed to fit the music. The timing of the divers as they lithely run along the diving boards and leap off; the timing of the girls in the pool as they bob up from the water and smile into the camera; the timing of Anita’s friends, each of them with an open umbrella, as they go tripping by.

3. Yeh raaste hain pyaar ke (Yeh Raaste Hain Pyaar Ke, 1963): Perhaps the most easily recognizable swimming pool when it came to classic Hindi cinema was that of the Sun-n-Sand Hotel, India’s first beachfront hotel. Built in 1962 in Juhu, the hotel soon became a favourite haunt for the film industry (Dev Anand reputedly had a suite booked permanently here on the first floor—a suite which he kept for 15 years). And the Sun-n-Sand had this iconic swimming pool, which was the setting for many scenes in Hindi films over the years. Here, in what must have been one of the first uses onscreen of the pool (Yeh Raaste Hain Pyaar Ke was released just a year after the hotel was built), the poolside becomes the venue for a party. A quiet evening party, some slow dancing, and the obvious chemistry between a man and the wife of his friend.

… which does not go unnoticed by the jilted sweetheart of the man in question. Shashikala acts the jilted and embittered lover well: not hurling imprecations, not shrieking and causing a scene, but saying what she has to by way of a song that cautions: the paths of love are difficult. Walk carefully. A warning, which could be against anyone—society, the cuckolded, absent husband. Even her own self.

4. Aa gale lag jaa (April Fool, 1964): Shashikala just about let her toes dip in the water in Yeh raaste hain pyaar ke (not surprising, considering she was wearing an expensive sari and all). Saira Banu in Aa gale lag jaa is at the other end of the spectrum: a heroine who is in a swimsuit, and who does a good bit of swimming. The swimming pool itself is put to good use in this song: a troupe of synchronized swimmers from Germany were commissioned to perform, with Saira Banu joining them midway. The song itself is preceded by a long prelude of instrumental music, which accompanies the swimmers as they go about their routine. Not a great song, though a passable one; it makes it to this list because of that pretty unusual display of swimming. 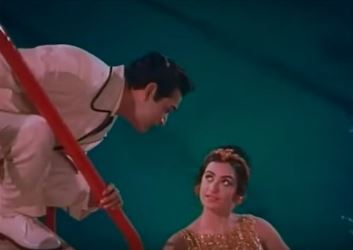 5. Soorat haseen lagta hai deewaana (Budtameez, 1966): The swimming pool at the Sun-n-Sand features all over again, but this time in broad daylight—and not just as a backdrop to a party, but as a well-used swimming pool, filled with a bunch of swimmers. The central figure, clutching a beach ball, is an indignant Shammi Kapoor, and he’s surrounded by Sadhana and her sahelis, ribbing the life out of him. While the song’s okay—Budtameez was one of the few Shammi Kapoor films that didn’t have outstanding music—what I like about Soorat haseen lagta hai deewaana is how the pool is so central to the song, and used so much. He’s in it; she slides into it soon enough (and then out again). There are long shots, there are close-ups. The pool is the focus.

6. Tu mera jo nahin (Bheegi Raat, 1965): Shashikala again, and at yet another poolside party. This one, though, couldn’t be more different than Yeh Raaste Hain Pyaar Ke (even though Shashikala’s character is again in love with a man who loves another woman). This one’s peppy and very much the epitome of the picnic-cum-pool party type: there are balloons, there’s dancing, there is lots of Coca Cola being drunk. Rajendranath, wearing a horrid swimsuit (a woman’s—why on earth did film makers seem intent on dressing him up in women’s clothing?) is painful to look at, but one can only be grateful that he’s not in a bikini.

7. Chal shuru ho jaa (Humjoli, 1970): Another pool party, but like none of the others on this list. It starts off well, with a mix of people decked up in their Sunday best, as well as some (nearly all men) obviously ready to leap into the pool and therefore dressed for the part. But by the time this song comes around, the party has taken an unexpected (for some) turn: a bunch of goons has sprung up with evil intentions. And our two heroes—played by Jeetendra and Mehmood—quickly jump into the fray to thrash the living daylights out of the goons. Or rather, to bash them and dispatch most of them into the swimming pool. What’s the point of having a pool around if you don’t pitch someone into it, after all? A fast-paced song which is rather funny to listen to, though I would really rather have liked Jeetendra and Mehmood to have kept their pants on.

8. Lehraake aaya hai jhonka bahaar ka (Waaris, 1969): Jeetendra and Mehmood again, though this time it’s only Jeetendra at the poolside, while Mehmood (again romancing Aruna Irani, as in Humjoli) cavorts about in a colonnade. This song has the distinction of being the only one on this list which is picturized at a private swimming pool. Not a hotel pool, not a club pool, but one in the grounds of a large and fancy mansion. Which, of course, allows you to fill your pool with all sorts of junk, such as balls andrubber ducks by the dozen (and in all sizes and colours). Not a great song, but I think Hema Malini looks really pretty. 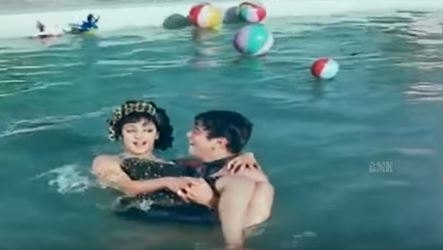 9. Ae haseenon naazneenon (Shart, 1969): Swimming pools, like gardens, seem to be tailor-made for romance of all kinds: the passionate romance (bare skin and simmering passion is de rigueur for swimming pools, though rarely in our rather more staid films of the 50s and 60s); flirting; playful teasing; and just general anticipation of romance, as in Thandi hawa kaali ghata. Here, in Ae haseenon naazneenon, Sanjay Khan’s character is setting out to woo Mumtaz, as she sashays about the poolside. His aim is to win a bet with his friends that he can cadge a date with this girl; what they don’t realize is that the joke’s on them: this girl is already his girlfriend, and the entire flirting-and-getting-the-girl routine is a farce.

(By the way, one of the little details I love here is the cute little swimming cap Mumtaz wears. Unlike the glamorous hairdos of nearly all the other women in this list who end up in the pool—Sadhana, Hema Malini, Saira Banu—her hair isn’t all beautifully coiffed and sprinkled with glitter or threaded through with shiny ribbons: more pragmatically, it’s neatly bound up under a no-nonsense cap tied under her chin). 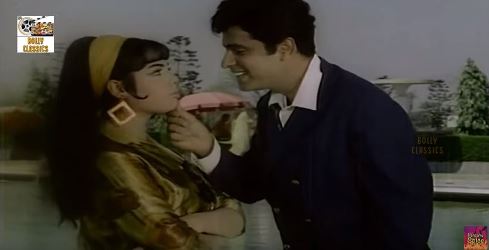 10. Tum bhi khoobsoorat ho (Rootha Na Karo, 1970): And, to end, a song from yet another filmi pool party. Rootha Na Karo was one of the last films for which C Ramachandra composed music, and his music was really one of the very few things that made the film—otherwise very draggy—an okay watch. That, and the Shashi Kapoor-Nanda jodi, two actors who (probably as a result of having worked in so many films together) bring to their onscreen relationship a playfully romantic camaraderie that is convincing. Here, in a delightfully infectious song that’s a paean to the charms of his girlfriend—even though she’s just shoved him into the water—our hero ends up pulling her in as well. They have no inhibitions about getting out and dancing (rather cutely, I think) in their wet clothes, too.

42 thoughts on “Ten of my favourite Swimming Pool songs”