I have a confession to make. While it’s been many, many years since I first heard the name of Ingmar Bergman (perhaps I was a teenager? I remember wondering at the time if he was in any way related to one of my favourite actresses, the gorgeous Ingrid), I have actually never got around to watching any of his films. Despite having heard high praise of his cinema. Despite being given recommendations. And despite having started to watch one of his films (The Seventh Seal), which I abandoned after perhaps about ten minutes.

Today is the hundredth birth anniversary of Ingmar Bergman, and it seemed high time I watched one of his films. I remembered that a blog reader had mentioned Persona as being a good way to ease into Bergman’s cinema, so this was what I watched to commemorate this birth centenary.

Persona (from the Latin for ‘mask’) begins with a series of isolated frames: an animal (sheep? Goat? Too close up to be able to recognize) is strangled, its eyes wide with terror. A massive nail is hammered into a palm while another hand holds down the wrist to which the palm belongs. A series of people, still as death, lie in clinically cold and sterile-looking rooms, looking more like corpses in a morgue than living souls.

And one of them, a boy, finally gets up. Tosses about, trying to sleep. Gives up, takes out a book, tries to read. Then reaches out a hand towards a screen on which appears the blurred face, much larger than life—it takes up what would be the wall—of a woman. He strokes her face, and as we watch, the face changes. Or, rather, the faces change. Now it is one woman, now another. Now with her eyes open, now shut. 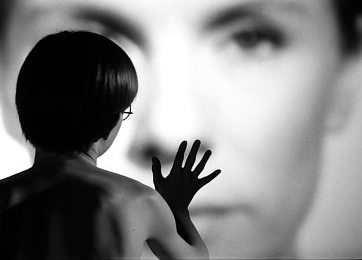 The story then begins in earnest, with a doctor (Margaretha Krook) informing a nurse, Alma (Bibi Andersson) that her new charge is the famous actress, Mrs Vogler, Elisabeth Vogler. Three months earlier, while playing Electra, Elisabeth suddenly went quiet for about a minute, then burst into laughter—before relapsing into silence.

She has been silent ever since. Three months have passed; tests have proven that Elisabeth Vogler is physically and mentally sound, but her silence continues.

Alma is confident and self-assured as she goes to look in on her new patient. Elisabeth—right now ‘Mrs Vogler’ to the nurse—is silent, of course, but it isn’t as if she doesn’t communicate. She lets Alma know that she doesn’t like a radio soap, for instance; and when a letter arrives, from Mrs Vogler’s husband, the patient consents to have her nurse read it to her. Enclosed in the letter is a photograph of a small boy, who Alma guesses is Mrs Vogler’s son; the patient looks somewhat dispassionately at the photo, and finally tears it in two.

The next important event is the doctor talking to Elisabeth. Elisabeth listens silently on, and with increasing indignation in her expression, as the doctor accuses her of basically living a life of lies. She goes from playing one role to another, not just on stage or in the movies, but in life.

The doctor, it turns out, has a cottage by the seaside, and soon after, Elisabeth Vogler and Alma are sent off here at the doctor’s behest. Elisabeth does not need a hospital; she has more chance of recovery—such as it is—away from hospitals.

So Elisabeth and Alma settle in at the seaside, and soon Alma has exchanged her uniform and crisply starched nurse’s cap for more relaxed slacks and top and straw hat. They bond over walks through the nearby woods, going mushroom-gathering, sitting out in the sun, Alma chattering on and on to a still silent but increasingly relaxed Elisabeth.

They grow so close (at least in Alma’s eyes) that one evening, a drunk Alma confides in Elisabeth (in a telling progression of relationship, the twenty-five year old Alma now calls her patient by her given name). Alma mentions how she had had an affair—for five long years—with a married man.

Then, she goes on to get much more explicit about her sex life: about how, some time back, she had gone on holiday with her fiancé, Karl-Henrik, to a hut by the sea. Alma had made friends with another girl, and one memorable day while the two girls were sunbathing in the nude, they were spied upon by a couple of boys—and what resulted was (as it’s later described) ‘an orgiastic episode’.

That night, says Alma, she came back from the beach to Karl-Henrik. They made love, and she ended up pregnant. She aborted the baby.

At this point, Alma breaks down and starts sobbing. What a horrible mistake it had all been! How could she have behaved like that? How could she have gone against everything she believed and knew was right, to do something so wrong?

Elisabeth, as usual, does not say anything, but from her eyes, from the gentle smile on her lips as she caresses Alma’s head and draws the younger woman closer to her, offering her solace, it’s apparent that she’s sympathetic.

In the middle of the night, too, she comes into Alma’s room and, for a briefly surreal moment, the two women stand next to each other, almost blending into one another…

I will make another confession: I did not, even after Persona had ended, understand the underlying meaning of it all. On the surface, it seemed to me a straightforward story of two very different woman—one successful, tormented, silent; the other young, seemingly confident yet unsure of her own decisions and her own past. How they come to be thrown together, and the dynamics between them: now companions, now fighting, trying to push the other down, throwing all her mistakes in her face.

But that is, I could sense, superficial.

What it is, is open to interpretation (and no, I’m not going to get into that, since there seem to be several viewpoints about what Bergman is trying to say through this film). But one thing I will say: once seen, Persona is not a film one can easily forget—and that I mean in a good way (I have, on the same day that I watched Persona, also seen another film—La Grande Bouffe—that I will never forget, but for very different, very unpleasant reasons).

Even without really understanding it, I’ll say that I liked Persona. Very much. Because it is just so visually beautiful. Every frame is stunning (and the fact that the film is in black and white rather than colour makes it even more impactful—the shades of grey leave more of an impression than colours would, I think).

There’s a stark minimalism to it, which stretches all the way from the décor of the rooms to the barrenness of the seashore. It’s as if Bergman painstakingly made sure that everything—the two main characters as well as their settings—are stripped of everything that’s non-essential. The look is clean, uncluttered, and so is the rest of the film: if you don’t delve deep into the complex meaning of the underlying theme, that is.

The women’s clothing (and their lack of jewellery) is all clean lines and lack of fuss. Elisabeth’s silence adds to the sparseness, as does the lack of other important characters. It is, basically, the story of Elisabeth and Alma. Their insecurities, their characters, their connection. That’s it. And Bergman lets them shine through, sometimes at such close quarters that it becomes almost painful.

Then, there’s the acting. Liv Ullmann has no lines to say, but her eyes speak volumes. And Bibi Andersson’s Alma, blabbering on (as if to make up for the silence of her companion) is superb, too. There were times when, watching her go from chatting happily to suddenly blowing a fuse and going berserk—either getting furious and yelling, or going coldly calculating, or bursting into tears—I thought, “Yes, I can understand that. I would behave the same, perhaps, if the conversation was always one-way.”

Yes, Persona is a lot about psychology, and you need to understand that in order to truly appreciate the film. If I watch it again, I will probably watch it with a very different pair of eyes. That said, though, I’ll say that this was one of those rare films I’ve watched that, even though I did not understand it all at first go, I found unforgettable.