Blog reader Hurdy Gurdy Man gave me a slew of Beatles-related information some weeks back. More specifically, information related to a film—A Hard Day’s Night—which starred the Beatles and was about them. Not a bio-pic, not a completely fictitious story (as many of Elvis’s films were, with him playing characters in no way related to his real self). But something in between. Fact and fiction.

Hurdy Gurdy Man informed me that the Beatles’ album A Hard Day’s Night had released in the UK on July 10th, 1964. Just four days earlier, on July 6th, 1964, the film of the same name had also been released in the UK (it was released in August in the US). Also, other than Paul McCartney (whose 76th birthday was on June 18th), the only other surviving Beatle—Ringo Starr—has his birthday today.

In celebration, therefore, a review of this very watchable little film about four wildly successful young men who—in the course of a mere decade (they teamed up as a quartet in 1960, and fell apart in 1970)—changed the way pop music sounded and was perceived. The legendary Beatles, acting as themselves, in a film about themselves.

The credits roll (and the title song plays) even as the Beatles race to catch a train. The race isn’t an easy one, because while the train will probably wait for them, they are being held back by a mob of screaming, ecstatic girls, grabbing and pushing and shoving and generally wanting them.

Finally in the train, they sit down in their compartment and, one by one, ask Paul (Paul McCartney) who’s the old gentleman sitting with him. This, it turns out, is Paul’s grandfather (Wilfrid Brambell), and they pretty much talk about him (the most common comment being that he’s “clean”) as if he wasn’t sitting there, right in the midst of them. (That comment about him being ‘clean’, is, it turns out an inside joke: Wilfrid Brambell had previously acted in a popular TV show in which he was repeatedly referred to as a ‘dirty old man’).

The band’s manager, Norm (Norman Rossington) comes by to make sure all is well, that the ‘boys’ are seated, and that they’re being good. The boys are generally being good, but Granddad soon begins to show his true colours. Going off to the dining car with Norm, he manages to shake off Norm and finds his way into the private compartment of a lovely lady. When Paul finds him, Grandpa announces that he’s engaged.

Well, that lands him in the luggage van, where the boys crowd around and play cards to keep him entertained, and where some schoolgirls—Beatles-crazy, of course—arrive. The situation segues into a song (I should have known better), and soon the train has arrived at their station.

This is London (the boys have come from Liverpool to London for a recording—they’ll be performing live in front of a large crowd, and the entire performance will be televised). And London, as everybody knows, is a big, bad place. A place rife with opportunity. Opportunity to gamble (as Granddad soon finds out).

Opportunity to make some quick money on the side, cashing in on the obvious and runaway success of the Beatles (also as Granddad soon finds out). 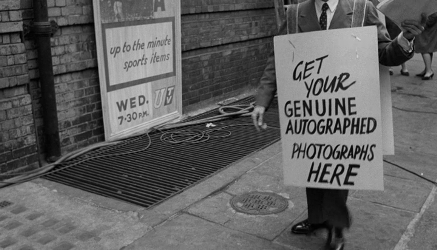 With Granddad running amok all over town, with the Beatles escaping and having some wholesome fun on their own, and with Ringo suddenly going off by himself to do some exploring, Norm is pulling his hair out. George gets mistaken for a tramp who’d want to make a quick buck in an ad, and the producer in charge of the shindig begins to throw his weight about, telling Norm that if the Beatles aren’t ready and in place on time, that’s the end. 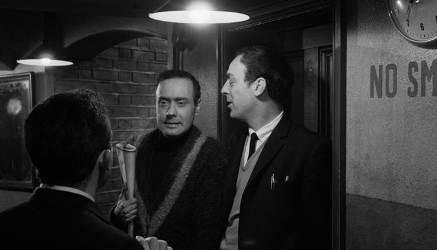 And all the time, there are their fans, going crazier by the moment.

It’s difficult to explain the story of this film, because it’s not the broad story that’s important; it’s the little details. The vignettes, the laugh-out-loud moments, Granddad’s loony antics (no, he’s not senile; he’s just a complete opportunist, and he seems to have few scruples).

What I liked loved about this film:

The music. Of course. The Beatles were at the height of their popularity at this time, and they were churning out some fabulous, fabulous songs: And I love her, Can’t buy me love, A hard day’s night, I wanna be your man, She loves you… and more. All of them are woven well into the narrative, and because the narrative itself is such that it doesn’t follow a very tight plot line, the songs fit in perfectly.

The Beatles. For four men who were singers, not actors, John Lennon, Paul McCartney, George Harrison and Richard ‘Ringo’ Starr make for surprisingly good actors—or are they merely acting as extensions of themselves? Possibly the latter, since Alun Owen, who wrote the screenplay, observed them for many days before using the phrases they used, their mannerisms and actions, in his script. The result is a close and sometimes beguiling look at four young men trying to cope with unbelievable fame, yet giving in to their own need to escape, to be themselves. (In one memorable sequence, literally—the four of them escape, run out onto a large field, and indulge in some playful rough-housing by themselves).

They can be flirtatious with the girls, they can pull off pranks (in one scene, as a tailor holds out a tape measure between his hands to measure the Beatles for suits, all of them hurriedly leave on one errand or another, and the last one to leave grabs the tailor’s scissors, snips the tape measure and pronounces it open).

This—the funniness of the script (and the dialogues), and the acting of everybody, not just the stalwart actors like Wilfrid Brambell (who, by the way, is hilarious)—is what makes A Hard Day’s Night such a delightful movie. It has its moments that made me think: Poor men, how did they cope with all those screaming girls? What was it like to be so famous at such a young age? —and I think I got an answer, at times, in the film. The way Ringo Starr runs off, for example, with only a camera. Going about, mostly unrecognized, acting like any other young man exploring a big city.

Plus, for me—born after the Beatles were no longer a band, and growing up in an era even after the John Lennon phenomenon was legend, a thing of the past—A Hard Day’s Night had yet another dimension that was almost surreal: being able to see the Beatles as they were in their heyday. Not merely in a music video where they’re singing and playing music, but more. Not in a documentary that traces their rise and fall (there is nothing in this film—or not that I know of—which is in any way biographical about any of the men). But in a light-hearted, fun film that also touches on how it might have been to be the Beatles, to be one of their roadies, or to simply be a hard core fan.

Happy birthday, Ringo! And thank you for the music, you and your friends.

(And, to Hurdy Gurdy Man: a special thank you).