I love it when blog readers suggest themes for song lists: it invariably provides food for thought. For instance, about a couple of years back, one of my readers, Ashish, sent me a mail with a suggestion: songs  about people selling their wares (he was spurred onto that by listening to the song Zindagi hai kya sun meri jaan, in which Dev Anand is selling ice cream—the point being that the song is used as a means of promoting the wares of the seller). A very good post on songs like that had already been done by Pacifist (as a guest writer on Harvey’s blog), but it made me think: goods, after all, are not all that’s sold. Services, equally, are sold. And the service can be anything: from transportation to tailoring, from entertainment to—well, something rather more intimate.

So, here are ten songs in which the singer sells his/her services. As always, all songs are from pre-70s Hindi films that I’ve seen. These songs are in no particular order, though my favourites tend to be towards the top of the list.

(Interestingly enough, between the time I compiled this post and published it—a gap of several months—Anupji, over at Mehfil Mein Meri, published a similar list, though his post included songs of people selling both services as well as wares).

1. Sar jo tera chakraaye (Pyaasa, 1957): Champi. This one is, to my mind, the iconic ‘Come along and avail of my services’ song. A champi or telmaalish waala (literally, a man who offers oil massages, both for head and for body) wanders along the streets, seeking business. Johnny Walker, as Abdul Sattar, was a breath of fresh air in what was otherwise an extremely grim tale of the hypocrisy and materialism of the world. Abdul Sattar does touch upon that—the fickleness of the world, its ability to reduce to despair anybody who cannot stand up to it—and offers a solution: an oil massage. It will wipe away your worries, he promises; whether monetary or romantic, whether you’re a beggar or a prince—you will leave his magical hands carefree and relieved.

2. Main rickshawaala (Chhoti Bahen, 1959): Rickshawaala. Mehmood, as the man whom a fickle fate has separated from his nearest and dearest—including his sweetheart—is reduced to taking up the only work he can find: as a rickshaw-puller. Unlike a more famous screen rickshawaala (Balraj Sahni in Do Bigha Zameen), this one doesn’t quietly and stoically pull his rickshaw along, trying to conserve his strength; no, whenever he can pause long enough to draw breath, he sings of how his two legs are as good as four (and, to prove it, he even races a tonga near the end of the song). He sings of his strength and dependability to prospective passengers, but when he’s on his own, having delivered a man to a date, he looks on wistfully, wondering when life will bring him to his destination.

3. Kaho jee tum kya-kya khareedoge (Sadhana, 1958): Prostitute. It’s interesting (and ironic, perhaps) that almost every mujra picturized in a filmi kotha tries to present the tawaif as a woman offering her love, her beauty, as something to be cherished, not bought. An illusion is maintained (say, in the songs of Pakeezah) that what is on sale is only the platonic aspect of a relationship that is, in reality, only a transaction: the woman’s body is on sale; her song and dance, her beauty, are just lures.

This song was written by the inimitable Sahir Ludhianvi, who also gave Sadhana another extremely hard-hitting, no-holds-barred song about womanhood, Aurat ne janam diya mardon ko. And it is a song that says it as it is, no sugarcoating at all: for some money—tossed at Vyjyantimala’s dancing figure as she whirls in front of an excited audience—everything here is on sale. Every aspect of her, everything she lays claim to, from her intoxicating eyes to her sensuous arms, are theirs for the buying. She promises them nights of passion, every delight that will take them to the heights of rapture. She eggs them on to buy. The world’s oldest profession, and advertised in a coldly clinical manner.

4. Kismat phati hui thhi (Ali Baba aur Chaalees Chor, 1954): Tailor. A decrepit tailor—his clothes covered with patches—is promised 1,000 dinars if he will take on a macabre bit of stitching: attaching a decapitated corpse to its head. Initially taken aback, this doughty (and greedy) tailor quickly settles down to his work—and sings as he works. His song is an interestingly philosophical one, which uses metaphors from his work to set forth a path to follow. Matlab ki kainchi se kaate baap ho ya woh bhaai ho, usi ke taanke pakke jisne daulat khoob kamaayi ho, he sings. Use the scissors of your own interest to cut off whatever or whoever you need to, even if it’s your father or your brother; the strongest stitches are those of he who is wealthiest.

The onlookers (including the woman who brought him here in the first place, giving him this commission) look on in horrified fascination as this man puts in stitch after stitch (thankfully, we are not shown the details) and cheerfully sings that one should use the needle of one’s mind to stitch strong and firm, making sure the thread doesn’t break. Very macabre, but appropriate too, in its own way. And good guidelines for what a tailor does, even if it’s just clothes he’s sewing.

5. Thehar zara o jaanewaale (Boot Polish, 1954): Boot polishwaala. In a refreshing change from the creepy work of the tailor in the last song, a somewhat more light-hearted job: polishing shoes. It is sad that this song is about child labour, but there mitigating circumstances: Master Rattan and Baby Naaz’s orphaned characters have no other option, but they do have the moral support of their beloved John Chacha (David), who teaches them this song, which they take up, calling passersby to stop awhile to get their shoes polished.

While most of the song extols the joys of labour, of using one’s own work to earn a living, this is one of the few ‘this is my work’ songs I came across that actually sets out by saying how much it’s going to cost: one anna for black polish, one anna for brown polish, one anna for the labour. While lots of people—including plenty of suit-clad, boot-wearing men—stop by and watch the song and dance of the children, no-one actually wants to get their shoes polished. Proof, perhaps, that too much advertising can distract people from what you’re really trying to sell.

6. Main hoon Papa Khan (Post Box 999, 1958): Magician. This otherwise rather forgettable B-grade crime thriller was notable for its good music, which boasted of popular songs like Mere dil mein hai ek baat and Neend na mujhko aaye. This one, less well-known, has Sunil Dutt and Shakila’s characters—sweethearts trying to get to the root of a crime—masquerading as a magician and his assistant. ‘Papa Khan’, from ‘Iran’, assisted by ‘Madam Bilbilaan’, if you want to be precise. Besides a relatively brief introduction that comprises of boasting about how Papa Khan has travelled the world and entranced everybody with his magic, there’s little in the lyrics that actually talk about all he does—but if you match the lyrics to what is happening onscreen (hats appearing suddenly on the heads of bareheaded men, and two Shakilas materializing)—you’ll see that it’s all a demonstration of Papa Khan’s skill as a magician.

7. Ghoomke aaya hoon main bandhu (Basant, 1960): Musician. Coincidentally, this song shares more in common with Main hoon Papa Khan than may appear at first glance. Here too, there are two people—a man and a woman—posing as performers, in order to turn the tables on the villain. And, here too there’s a good bit of boasting about how lucky Indians are that these immensely talented people, having roamed the world (in this case, Russia, China and England), have finally come to India to show off their skills.

Johnny Walker is his usual highly watchable self, and the lyrics are tongue-in-cheek, incorporating lots of references to Hindi film music personalities: our baajewaala from Patiala has no qualms about boasting that SD Burman, OP Nayyar, Shankar-Jaikishan, Asha and Rafi (the latter two, delightfully enough, actually the singers of the song) have all been his disciples; they’ve learnt from him.

8. Hum bahisht ke maalik (Ek Din ka Sultan, 1945): Water-carrier (bhishti). From the life of the Mughal Emperor Humayun comes an interesting story, the stuff of legends—though this was true, and not a legend. In the aftermath of a battle, trying to cross a river, Humayun nearly drowned and was saved by a water-carrier or bhishti, who helped the Emperor across. In gratitude, Humayun granted the man (whose name was Nizam) any wish he asked for, and Nizam asked to be made king for a day. This was duly granted, and Nizam sat on the Mughal throne for a day. Sohrab Modi used this story as the basis of this 1945 film, which had this enjoyable song picturized on the bhishtis (or bahishtis, as they’re referred to in Ek Din ka Sultan). The men here (and a boy) rejoice in the work they do, talking of their importance: how even kings who bow before no-one, bend with cupped hands before a bhishti.

9. Zara ruk jaa, pyaare ruk jaa (Sitaaron se Aage, 1958): Bicycle repairman. This song is an unusual one in that while it actually does focus on the work done by the singer—who is soliciting business through the song—the lyrics themselves are deliberately vague. A random passerby (onscreen) or a random listener/watcher, who hasn’t seen Sitaaron se Aage but only comes across this song may not realize that there’s more to this than Johnny Walker telling passersby to stop, and entertaining them by doing tricks with his bicycle. But if you listen carefully, you hear the reference to ‘service’. And, of course, if you watch, you see how Johnny Walker’s cronies, near the end of the song, take advantage of the distraction of the spectators to rush about, puncturing bicycle tires and letting out air—all a means of revving up some business. 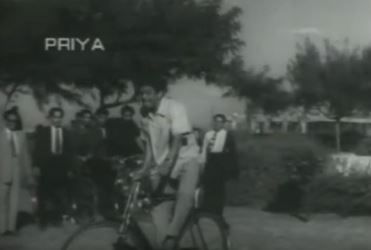 10. Chaakuwaala chhuriwaala chaakuwaala (Al-Hilal, 1958): Knife-sharpener. And, to end, a song whose lyrics aren’t really all about what work the person does (though it’s shown, well enough), but which I couldn’t resist, because the song is so good. Till sometime back, the only version of Chaakuwaala chhuriwaala chaakuwaala that I’d seen was the one which appears early in the film, where Shakila, accompanied by a troupe of other girls, sings and dances in a royal court. That one is misleading, since the lyrics are more romantic than anything else, and so (in the absence of any visual clues) I ended up thinking it was about somebody who sold knives.

But no, there is a second version of this song, and it proclaims, loud and clear, what this person (Shakila again, a woman pretending to be a man) does for a living: she doesn’t sell knives, she sharpens them. She sets up her sharpening wheel at a marketplace, and sets about sharpening dulled knives brought by customers. The song still has only the ‘Chaakuwaala chhuriwaala chaakuwaala’ to indicate her profession, but at least it shows what she does. And what a deliciously peppy and fun song, in Shamshad Begum’s gloriously earthy voice.

(To watch this song, fast-forward this video of Al-Hilaal to the 40 minute: 40 seconds mark).